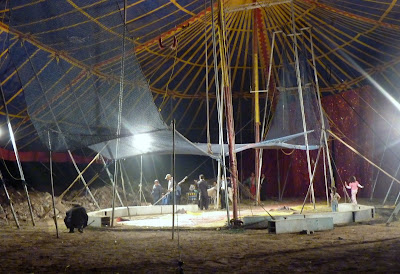 Another circus is in town.
And I have been sucked into its vortex  -- front row, center.
The animals did it. An elephant.  A tiger.  A bear.  Baboons.  Monkeys.  Camels.  And llamas.  Enough llamas to mount an expedition to Machu Picchu.
So, there I sat.  Once again, amongst all of those childhood memories I wrote about in another opening -- another show.
I approached this circus with higher hopes than the circus I attended in January.
The tent was much larger.  The animals were impressive.  The facade worthy of a Barnum show.
But when I arrived, something was lacking.  A crowd.  It was sparse.  No.  That is unfair.  It was simply missing.  Maybe they were all at St. Pat's on-going bash.
Some of my hopes disappeared the moment I stepped inside the tent.  The interior was as sparse as a Fellini set in search of a circus.  Lots of space.  Little filling.  Third degree investigation lighting.  And piles of rubble.
But circuses are about acts.  Not scenery.
And acts there were.
Let's get something out of the way.  This was not the cirque du soleil.  It is a Mexican family-run circus.  Of course, I did not pay $250 (US) to see it, either.  $40 (Mx), if you please.  And worth every centavo.
The acts used every family member -- right from the grand opening with the full cast led in by two beautiful young women twirling batons (Yup!  Batons.), and dressed as Las Vegas show girls.


That was followed by a trampoline act with some very talented children and two adults.


An animal act involving llamas, a camel, a pony, and a dog.


A clown -- clowning with children from the audience.


A tiger with the useful fire hoop and whip act.


Another clown with a robot dog.


Another animal act with a small bear, a huge horse, and a dwarf horse with a severe limp.


And finally, a very nice trapeze act with three guys, a clown, and a young boy.

Then, it just stopped.  It was over.
Cheesy.  Sure.  Cheesier than a quesadilla.  But just as fun.  And that is all anyone can ask of a circus.
And it certainly fit in with this week's high celebrations.
But I really need to tell you a bit more about those fireworks.
And I will. 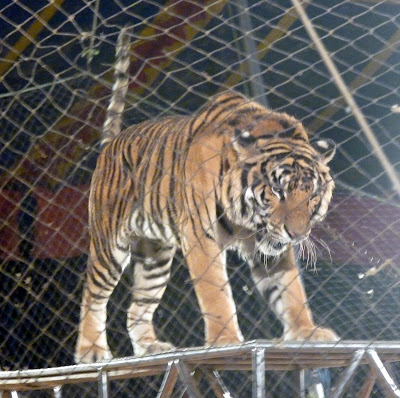 "Cheesier than a quesadilla." That's too cute and brought a smile to my face. I'm definitely going to adopt that phrase.

Glad you're enjoying life in Mexico and can't wait to read about the fireworks.

Hope you have a great weekend, Steve. :D

Thank you for sharing the "fireworks" and the circus with us. You make us feel like we are there.

"llamas, and tigers, and bears, oh my"

Best movie ever made.

Is this circus theme a kind of Roots for you?

The circus makes me cry. I dont think the animals are well cared for in most cases. And I lothe clowns and Magicians. So... I have not been to a circus since I was 8 years old.

The Moscow Circus is in town now. In fact, it's just a few blocks away. I am tempted... but not too much. Here in Honduras, these type of circuses are a bit seedy I suspect. But maybe....