gold on the beach

I have seen the sign for the past two years on drives to Manzanillo.


An arrow points to a one-lane cobblestone road running between mango orchards and cattle pasture into Mexico's coastal hills. 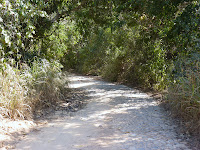 The name is not unique to this part of Mexico.  There is another beach with the same name a mere 10 miles south in Manzanillo.  And almost every Spanish-speaking country has one -- or many.  Even Oregon has a Gold Beach.


In most cases, the name is merely a romantic metaphor.  "Our sand is as beautiful as gold."  Or, more prosaically, it represents the cash that flows from tourist hands into local merchant coffers.


In the case of playa de oro on the road to Manzanillo, though, it is the literal truth.


Because this is Mexico, we need to sift the facts from the legend.  The facts first.


One of America's fastest steam ships, Golden Gate, left San Francisco during the Civil war with a hold filled with over one million dollars worth of gold.  That amount did not include the gold in the money belts of the 337 passengers -- many whom were headed east with their Sutter's Mill takings.


On the afternoon of July 21, 1862 something went terribly wrong.  A fire broke out in the engine room.  With the flames quickly engulfing the ship, the captain steered it to a rock known as pena blanca on the Mexican coast just north of Manzanillo.


The ship sank, and most of the crew and passengers died either in the fire, in the surf, or of their wounds.  The gold was gone.  In the sand and surf of Mexico.

Two years later, a salvage crew recovered a small portion of the gold.  And that is where the facts end.


But there are two additional legends.  The first involves a retired American who supposedly hired a dredge to suction up most of the gold.  He is rumored to have used the funds to build a hotel in Manzanillo.  Having seen the hotel, I suspect he did not find much other than a good tale to share with patrons.


The second legend is that visitors have found the odd gold coin on the beach.  Even to this day -- as the sea disgorges its bounty.  As far as I know, no one has attributed the coins to Captain Jack's lost Aztec gold.


That last legend may have been given its currency by the most recent effort to find gold on the beach -- from a different source.


A couple decades ago someone had the bright idea to punch a cobblestone road through the hills to one of Mexico's prettiest beaches.  He even started a housing development with streets and electricity.


On my Monday mail run to Manzanillo, I decided to take the road less traveled -- to the beach.


Time has not been kind to the little road.


When built, it must have been quite a wonder.  Only one lane wide, but it must have taken thousands of man hours (and certainly none paid at Davis-Bacon wages) to lay those stones.


The drive is about four miles.  And a slow five miles it is.  If you exceed ten miles per hour, you are placing your vehicle at the mercy of the road gods.  The potholes are deep and frequent enough they could rival any axle-busting obstacle in the Baja 1000.


But there is treasure to be found in the drive.


At one point, I thought the trees were shedding all of their leaves simultaneously.


But they were not leaves.  They were butterflies.  Hundreds.  Black, yellow, orange, blue, white.  I stopped dodging pot holes long enough to watch them.  Magic fairies in the jungle.  I almost expected Iolanthe to make a guest appearance.

Even without the butterflies, the drive would be worth the ultimate reward.  At the end is a golden beach that stretches north and south almost to the horizon.


Backed by hills covered with blooming trees and cactus.  And rocks jutting into the surface.  Including the not-so-helpful pena blanca -- in the middle of the photograph.

The reason for the road lies in ruins.  And I thought Progreso had some run-down houses.


The housing development started with a few houses that are mainly shells now.  But the place is not entirely abandoned.  I saw at least three homes where families have taken up rustic residence.


There was one set of rocks that were exposed during low tide.  In Oregon that would mean an opportunity to find treasure in the tidal pools.  Anemones, urchins, starfish, barnacles, minnows.


Not here.  The rocks were a desert -- with the exception of some very odd-shaped crabs that had the personalities of cockroaches.

They scuttled so fast, I had trouble photographing them.  But, if they wanted to act like cockroaches, I would treat them like cockroaches and track them to their hiding place.


(If you click on the photograph, you can see the intricate pattern of the crab shell.  They may look like bugs.  But they have great outfits.)


It was a crack in the rock -- with probably 30 or 40 of the crabs stacked on top of one another.  People who are a bit squeamish about bugs will probably not frame that particular photograph.

Other than a few ATV riders, I saw only two other cars during my time at the beach.  The tourists in the cars had set up their own rustic beachhead.  And I must confess that their little tent suburbia tempted me to return with my own camping equipment.


A fellow blogger told me playa de oro was her favorite beach -- when she could not get to La Manzanilla.  And I understand why.


It is isolated and beautiful.  The perfect place to take a picnic lunch (no food service on this breach) and to spend the day -- or perhaps the night.  A great place to sit in the sun or splash in the sea.


If you visit playa de oro, be certain to pack out what you bring in.  The Christmas/New Year celebrants did not follow the rule.  Leaving the car park area a virtual trash heap.  (I did not have the heart to photograph it.)


But I will visit again.  After all there may be gold in them thar dunes. 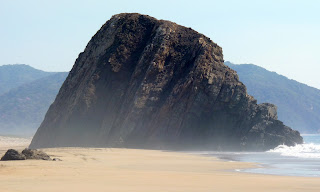 Shoe and I took that drive years ago before they rebuilt that section of hyway 200. The sign went missing for 2-3 years. We went in his big pickup and I've wondered about road conditions for mine.

It is a pretty beach but like most of the open ocean beaches around, it's not a swimming beach. When we were there there were a few 4wd's zipping up and down and I hear you may be able to drive to Playa de Coco's. Past the airport which is the Playa de Oro airport

Another interesting story with photos. My favorite roads are "the roads less traveled". The rock at the end reminds me of the "haystack" in Oregon.
Nita

Steve,
Thanks for the stories.  I used to visit Playa de Oro with several Barra locals back in the late ‘60s and even camped there for ten days in 1970.  The story they told was that the cobblestone road was built in the ‘30s to carry out bat dung from the big rock in your picture – the major fertilizer before WWII and a sort of gold.  Only one picnic table under a palapa roof back then – no parking lot, houses or hotel.  And the ocean riptides made for treacherous swimming.
Carmelo

It has not advanced much since then.