ruins of the day

We do not know much about the people who built Teotihuacán.


Or why they abandoned their majestic city on the plain north of Mexico City sometime between 800 and 900 AD.


What we do know is that the people who built the city left.  The city was abandoned -- except for a few squatters.


When the Aztecs came wandering through on their way to founding their watery empire, they believed the place was built by gods.  And they left it alone as a sacred site -- suited only for pilgrimages.


Archaeologists took a serious interest in the place in the early 1900s.  As part of the centennial celebration of Mexico's Independence, Leopoldo Batres used dynamite in the hopes of finding layers under the pyramid of the sun.  There were none.


But he left enough damage that it is still possible to see the erosion from his blast holes.


He then reconstructed the pyramid – and did a terrible job.  Adding a terrace where one never existed.  It was as if Walt Disney and Alfred Nobel had gone into the archaeological business.


When the place was built, it was considered sacred – and continued to be sacred up until the conquest.  The people who built Teotihuacán believed the act of creation took place in the caves under the site.  And the Aztecs were shocked and awed enough to buy into the same mythology.


My earliest recollection of Mexico (probably when I was in the sixth grade) is of the pyramids (of the sun and of the moon) at Teotihuacán.  They have long been the poster children of Mexico tourism -- before the Maya became the center of archaeo-tourism.

The two pyramids can be seen for miles around the site.  Looking just as their creators wanted them to look – like the surrounding mountains.

Like every other tourist, I wanted to show my mettle by climbing both pyramids.


Unfortunately, the day we visited was one of the worst days of my intestinal disorder.  I was far more interested in finding the nearest rest room than I was in climbing anything.  Including the face of history.


And that was too bad.  My fellow travelers told me the view from the top was amazing.  I am sorry I could not make the trek.


But I was able to see the other site that interested me.  Two days ago I told you about the reconstruction of the Temple of the Feathered Serpent in the National Museum of Archaeology.  This is the real deal. 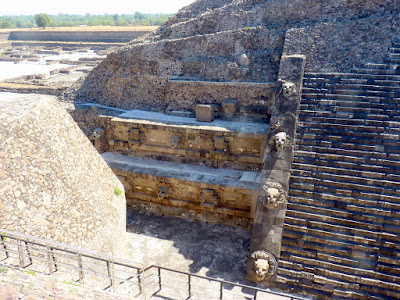 Visitors can get very close to what remains of the original.  Almost all of the paint is gone, but the mosaic representation of the rain god is still there. 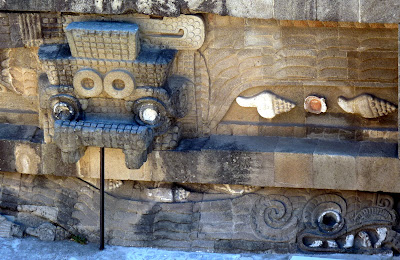 But the city is far more than a sacred place.  I mentioned two days ago that at its zenith, it was one of the largest cities in the ancient world – with a population of nearly 250,000.


You can still visit the remains of their homes.  With the pottery on view in the museum on site and in the National Museum of Anthropology in Mexico City, it is possible to reconstruct what it was like to live in such a great city.


My only disappointment was my inability to fully enjoy the place.  Unlike some of the other monumental ruins I have visited, this is the only one I would like to see again.  To climb those pyramids before they are shut down.

I made it to the top of the Pyramid of the Sun in 2002. It's quite a climb, believe me. I don't think going down and doing the other pyramid would have been possible, and I was younger than you at that time. The view is quite fine. Go back one day. Take me with you.

Now, that is the type of challenge that keeps me in Mexico.

I am sorry you did not get to climb the temples. The view from the top lets you see everything that has been restored in the complex. And eventually it probably will be prohibited to climb. It is my understanding that climbing is closed on the big pyramid at Chechen Itza.Too many feet!
Nita

The pyramid at Chichén Itzá was closed after a California woman fell and died in 2006. But the Mexicans are closing the pyramids one by one to avoid any further erosion with touristy steps. Just as the Greeks did with the Acropolis. I wish they had thought of that by taking away Leopoldo Batres dynamite. We might then have something that looked like a temple rather than Cinderella's Castle.

Hello. I have been following your trip to Mexico City with interest. I took a tour of the City in the mid 70s and I can see that the tour itinerary has hardly changed. Your descriptions of your various visits have whisked me back in time and in many instances your thoughts have reflected mine. I loved some, but not all, of the colorful murals. Xochimilco...not so much. Could have spent longer (days) in the museum. Climbing to the top of the sun pyramid was a real highlight of my tour. But I have an active imagination. Envisioning being forced to climb to the top of the pyramid to be sacrificed gave me the chills. Nevertheless, I'd love to go back to Mexico City and spend more time there. Thanks for taking me back virtually.

You are most welcome. There is more than enough in Mexico City to justify an annual trip.