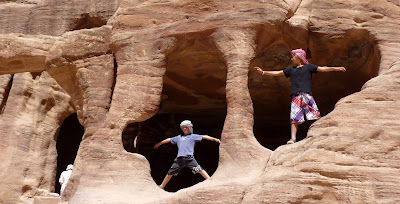 I may as well start with the conclusion.

For a good reason.  I have already telegraphed my Petra experience in earlier comments.

Petra has been on my “see and die” list for over fifty years.  What the Holy Land is to some of my fellow believers, Petra was tor me.  A place to give some context to my experience in this world.

And Petra is a cornucopia of context.

The area has been inhabited since at least 7000 BC.  Those are not the people who carved the city’s magnificent edifices.  But they came for the same reason.

Water.  This is desert country.  Lots of sand.  Lots of sun.  But very little water.  The same desert that the Turks relied on to protect them from the Arab army in the First World War -- or the War of Arab Independence as it is known locally.

About 200 BC the masters of globalization arrived in Petra.  The Nabataeans were an Arab tribe that had been plying their caravan trade of goods from India and China to the Mediterranean nations.  Ships would cross the Indian ocean.  Dock in Arabia.  And camel caravans would transfer the goods to Mediterranean ports.

Being the Ferengi of their time, they decided that the big money was not in transport.  It was in services.  And their monopolistic choke point was Petra.  Caravans needed water and provisions.  And Petra was a necessary stop.

To show the wealth they had accrued through their service economy, they took advantage of the second natural resource of Petra.  Sandstone cliffs. 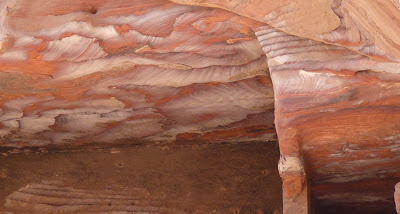 It was the perfect medium for carving grand tombs for both kings and the elite.  And, like most of their neighbors, they were far more concerned about where their bodies would rest after death than where they rested their living heads.

That was a surprise to me.  Steve’s 11-year old mind was convinced that the buildings were palaces.  Or, at least, market places. 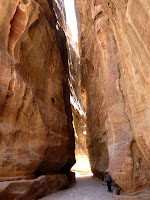 The “Treasury” is the carving that played such a big part in my boy memory.  The first building a visitor encounters After squeezing through the narrow entry to the “city.”

It was initially a king’s tomb -- and then a mortuary.  Bodies were laid out in its small chamber before being transferred to a tomb.

The façade includes Egyptian. Assyrian, and Hellenistic elements.  The Nabataeans found no joy in diversity.  They were a stew pot civilization.  Taking what they liked from other people and making it their own.

Each of the elements on the Treasury were almost intact when the Swiss traveler Johann Burckhardt bribed his way into the canyon in 1812.  Westerners provided the appellation “Treasury” to the building became it looked like a bank. 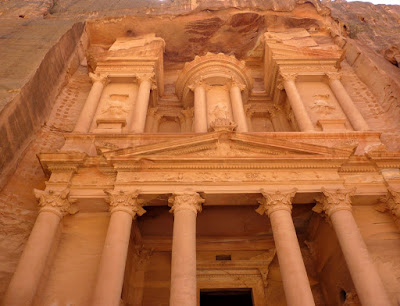 That bit of anachronistic thinking turned out to be a terrible mistake.  At the turn of the twentieth century, local tribesmen assumed that a treasury must house gold and jewels behind the walls.  They shot up the front, hoping wealth would pour out.  They chose unwisely -- in the argot of a certain film associated with the building.

But the “city” is far more than merely the Treasury.

There are pre-Islamic tombs based on the Kaaba in Mecca -- an object still revered by Muslim believers. 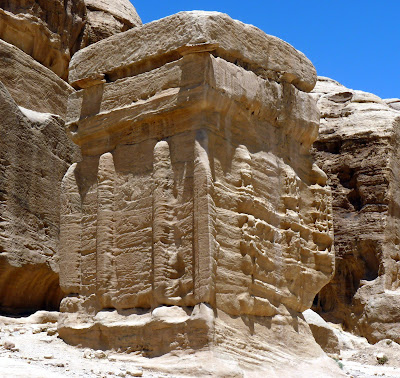 And tombs with an obvious Egyptian influence.  Like the Obelisk Tomb -- rather obviously named.  (Archaeologists who name these sites seldom have the souls of poets.) 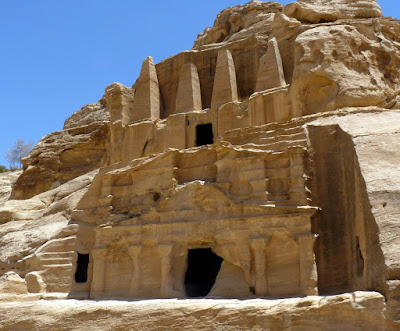 Competition from the Roman Empire nearly put the Nabataeans out of business.  For their own reasons, the Romans developed the Silk Road to China and India skirting the necessity to deal with the Petra monopoly.

The Nabataeans understood marketing.  They started building Roman-influenced buildings to deal with its competition.  Such as the Urn Tomb that began as a royal tomb, was converted to a Roman law court, and, under the Byzantines, to a church. 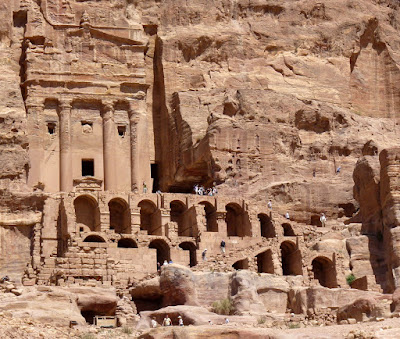 But when you compete with powers like the Roman Empire, enterprises are usually destined to end in tears.  As it did upon the death of a Nabataean dynasty 106 when Petra suffered a hostile takeover by the Roman CEO. 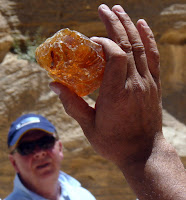 Eventually Rome declined.  Its subsidiary, the Byzantine Empire, slipped away, as well.  Trade routes shifted.  The ascendancy of Christianity reduced the demand for frankincense for burning in the presence of idols.

Petra slipped into obscurity in the 14th century.  Lost to the outside world until the Swiss busybody Burckhardt  just had to see it.  And spilled the beans to the rest of the world.

And I am glad he did.  It is now the most visited site in Jordan.

In that sense, the Nabataean spirit of globalization is alive and well.  It has merely adapted to its times.

Best of all, this sixty-something is at peace with his 11year-old self.

Thank you for your information as well as the photos. I now understand more about the site.

Fascinating.  The "cantera" that is used for columns, window facings, furniture, etc here in Mexico is the same material as Petra is made out of........... It is "mined" all over Mexico.
My granddaughter has been to Petra........I HOPE some day I get there....soon.
Thanks for an interesting post!

As do I. And I really want to return.

First photo of the young boys is great! And their head gear, love it.

I'm thrilled that your expectations were exceeded. It is truly one of the great places of the world, and I feel lucky that I got a chance to see it last year when I was in Israel, Palestine, and Jordan.  After all of those days at sea, you must have been excited to have a truly spectacular excursion.

As a boy, I read about Petra in Richard Halliburton's Book of Marvels.
I'm glad that you got to see it.

Limestone -- one of my favorite sedimentary rocks. Their unique formations, carvings are unbelievable. I can only imagine what a wonder that was to see in person!

What beautiful place! Glad you finally made it. I will refrain from any Indiana Jones jokes.

It is worth the trip.

They made good symbols for my inner boy.

I love sea days.  But visiting Petra made up for all of the logistics of visiting.

You need to let that boy see Petra.  I am glad I did.

The colors stunned me.  I did not anticipate them.

Believe it or not, there is an Indiana Jones gift shop at the entrance to the site.

Thank you for sharing.  Having been there two times I still learned things from your visit.

Would love to visit Petra myself, your photos are inspiring.  By the way, I  believe "They chose 'poorly'" would more accurately quote said film's screenplay.

Petra is worth several visits, I suspect.  I know there is a lot more for me to see.

I am the king of the truncated quotation.