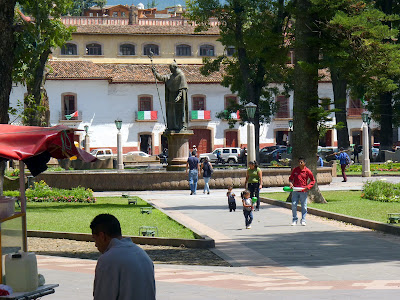 The plaza grande in Pátzcuaro is one of my favorite places in Mexico.

It has all of the elements for semi-professional people watching.  Families.  Children.  Dogs.  Vendors.  Young people in love.

I have had very little contact with nuns.  For some reason, though, they fascinate me.  And on Monday in the park, there were more nuns than you could shake an eighteen inch ruler at.

I am not certain, but I suspect most of the nuns sitting on the bench eating ice cream were on an outing from a home for elderly nuns.  There were a few younger nuns who seemed to be playing the role of shepherds.

They all seemed to be quite content with life.  And that has been my experience.  Nuns know what the world is about, but they have chosen a form of life dedicated to their faith.  Maybe that is what fascinates me about them.

Or it may simply be their joy for life.  A separate group of nuns walked by -- occasioning a hearty round of Christian cheer. 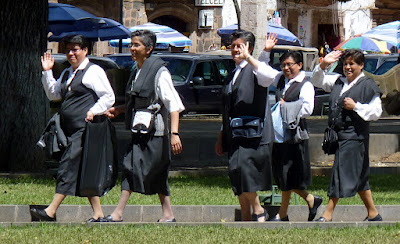 Or maybe it is their dignity.  I tried to surreptitiously take a photograph of the older nun.  Not because of her age.  But because of the wisdom her years represent.  And her sheer beauty. 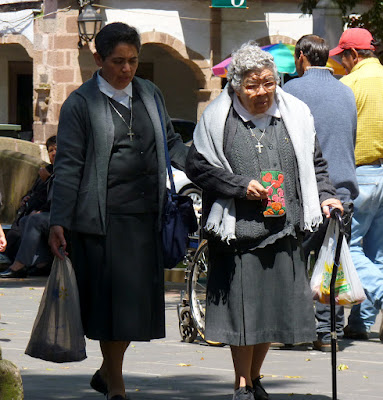 Both of the nuns saw my sly shot, and smiled at my naughty boyness.  They then walked a bit out of their way merely to wish me a very sincere “buenas tardes.”  The extra steps were an appreciated sacrifice -- just for me.

After the nuns left, this young dad showed up.  Doing his best to capture the joy of his son chasing pigeons. 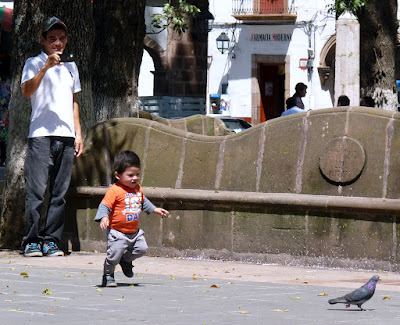 I suspect the greatest joy was the dad’s -- watching his son who, probably only months before, was crawling, and was now trying out those legs that would propel him through life into old age.  Where he could, one day, sit and empathize with the nuns.

But the dad, his son, the nuns -- even the pigeons -- in the square always refresh me.  Letting me be, for one shining moment, part of their lives.

Pátzcuaro's City Hall says it's the largest plaza in Mexico after the Zócalo in Mexico City. Maybe it's true. Even if it's not, it's one swell plaza.

Amen to that.  The music speakers are a very nice touch.

Did you take these pictures on Monday? In Honduras, Sept 17 was Teacher's Day. Perhaps, the sisters were a group of Catholic educators who had a few minutes of free time. We have a sprinkling of sisters in Honduras. My cousin was a nun, but she quit to marry a priest. Then, she had other adventures. I feel a blog post in the making on that rabbit trail.

Very nice piece Steve.  I miss Mexico so much and especially so after ready your stories about daily life there.

You may have the makings of a mini-series there.  How about "Bayou Luther"?

Sharing the experiences helps me to enjoy them all over again.

She would resent the title "bayou." She was a city girl, born and bred in New Orleans. A New Orleans Tale: Nun Interrupted. Sounds tacky, huh?

When I was in Catholic, coed grammar school, the nuns still maintained their long traditional habits. As the years went on, their costume got shorter and more modern looking. Eventually the headdress was lost altogether, except for the Principal and a few of the older nuns.
But they didn't loose their wooden ruler--it mostly stayed on their desk.

I have felt the wrath of that ruler - in the 3rd grade when I raised my hand to go to the restroom, but, didn't wait to be acknowledged

I too love that Plaza - still yearning to head over that way, soon..

I never experienced the wonder/boredom of Catholic education. Our little town in Cajunland had but one public school, so the priest and the sister came to us. Not to all of us. The heathen, including myself, a Protestant, were instructed to leave the building when they came to teach catechism. It sounds like I may have the better experience, an hour of recess once a week with a few black Baptist children.

The boys mostly got the wooden ruler treatment, spitballs was one reason, they had good aim though, sometimes right in the headdress.
On the other hand, the girls walked around with gum stuck to their noses for the rest of the school day, chewing gum was not allowed in the classroom. What I never understood was why it was sold during recess?

That was a very nice post Steve. I also love, and miss, Plaza Grande.

I too have noticed many more nuns here than back in the U.S. Maybe Mexico is more Catholic and religious vocations are a more going concern here. Maybe nuns in the US don't wear habits in public anymore, so you can't tell when you run into one. Maybe the nuns we see in Mexico are not Roman Catholic nuns but belong to some sort of derivative evangelical groups. I ran into three nuns this morning at the immigration office and wondered. You should question the next group of nuns you run into and report back to us.

Just like the U.S., Mexico suffers a shortage of priests and nuns. Remember, it was only during the Salinas Administration that the law prohibiting the wearing of clerical garb in public was relaxed.

Yes you see quite a lot of nuns in Mexico, but in Rome you see the most anywhere in the world. MY son Carlos is a photographer and he has taken many pictures of the sisters. He joked that he was going to write a guide book about the nuns. But all kidding aside, the sisterhood does have its place and one good thing is that the church recognizes this.

"And on Monday in the park, there were more nuns than you could shake an eighteen inch ruler at."

Steve... thank you.  I have a bit of a fascination for nuns... must be years of repressed Protestantism...

Nicely written! makes me miss Mexico. Have you been to the main plaza in Oaxaca?

There's something about the whole city of Patzcuaro I love.

I agree.  I have found it to be a very open and friendly place.  Like most small, rural towns.

I haven't.  But I hope to get there this winter.  I have quite a few more trips in the hopper for January and February.

You could start a new SMA gang.

You would almost believe I am the result of Catholic schools.

I found the same thing to be true in Rome.  In my area of Mexico,nuns are as rare as a 1000 peso note.  (After four years in Mexico, I saw my first thousand note in San Miguel last month.)

I just returned from the food kitchen.  Your post was right on.

I had a fifth grade teacher -- Mr. Schaeffer -- who was quite fond of the eighteen inch ruler for discipline.  It was rather ineffective.  I talked him out of hitting me the only time I was threatened.  Thus the spoiled child.

And just right for television.

Other than the weather, this town seems to suit you fine.

I can see the headline now.  "Oregon Inquisition Comes to Mexico."

That makes me wonder how many clerics are dressed in mufti.