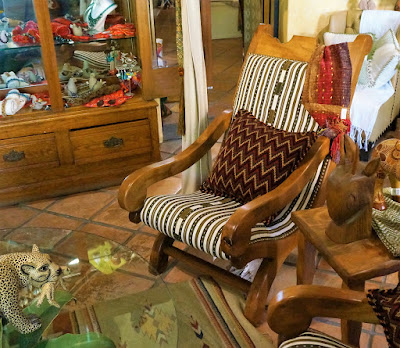 I am shopping for furniture.

But you probably already know that. My house came with a few pieces of rudimentary furniture that may have worked as stage props in your high school's production of Who's Afraid of Virginia Woolf? But not for my house.

And then there was Barco, the frustrated interior decorator. He decided a sofa and chair needed to be distressed. Rather like that torn jeans so beloved of teenagers, Baby Boomers, and prostitutes.

With Barco's death, I am back on track to outfit the house in its inherent style -- Mexican contemporary modern. The house has the distinct lines of a Luis Barragán home. That should make my task easier since Barragán, like Frank Lloyd Wright, designed furniture for his homes.

On our tour group's return from Pátzcuaro, we stopped overnight in Guadalajara. We only had one shopping stop: Tlaquepaque. If you do not know about Tlaquepaque, just imagine its tourist core as an odd cross between Rodeo Drive combined with a large dose of Tijuana.

There are furniture stores in Tlaquepaque -- in the same sense there are antique shops in Manhattan. With prices to match.

I found a couple of chairs vaguely similar to a Barragán butaque chair. But they had been tarted up to the point they had lost all of the simplicity that made the butaque chair a classic.

And then there was the price.  Each chair was listed at $25,000 (Mx). At the current very favorable exchange rate, that would be about $1,400 (US) for each chair. Not outlandish for this style of furniture, but not what I want to pay for a chair that is the mere shadow of its inspiration.

The rest of my shopping trip was no more successful. I found a couch at one shop and a dining table at another. But both stores prohibited photographing their furniture. I suppose to merely stop tourists from blocking up their showrooms with curiosity agape and wallets snapped shut.
And the "no shooting" rule seems to be strictly enforced, unlike most Mexican venues displaying similar signs. Even when I explained I was very interested in buying the dining table, and that I might not remember the store without a photograph, the matron-in-charge used her best Valkyrie tone to let me know: "It is forbidden."

So, I came home with no furniture -- and no new ideas. That is OK. When I brought up the topic of furniture two years ago, several of you suggested some very good sources. Primarily in Guadalajara. One place makes custom-made pieces from parota in contemporary Mexican style. I just need to get up there again.

I usually say there is plenty of time to buy the correct furniture. But I am also longing to get the place in the shape it should be for my family -- who will be on their way down here in a month.