It is el dia de muertos in these parts. Or, in a language which I actually understand in some depth -- Day of the Dead.

Our streets are filled with mini-Catrinas and Catrins trundling off to school as links between the living and dead. Or, more likely, just because they think they look cool. And they do. About as proud as the mothers who costumed them and are now accompanying them to a day of distraction from classes.

There is also rain in the air. Last night we had a sudden down burst. This morning, it is just drizzle.

That is bad news for the kids in their costumes and for the adults who tried to get a jump on others by constructing the founding of their outdoor altars last night.

My concern with the rain is a bit more narcissistic. Since Monday of last week, the house with no name has been getting its own Catrina treatment.

The tropics have a way of reminding homeowners that everything dies. Sometimes very quickly. I have lived in the house with no name for almost exactly five years. During that time, the heat and humidity has had its way with paint and mortar -- included the dreaded and common salt-leeching in our concrete. 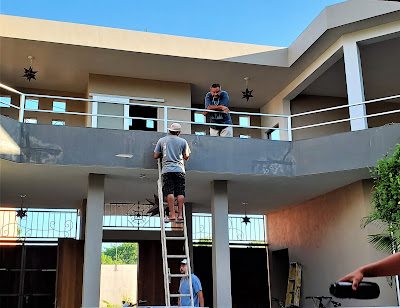 Several years ago, I was in Brazil with friends. A fellow Oregonian looked at some of the colonial buildings in Recife's square and asked: "Why don't these people take care of their buildings?" The answer was simple. There is only so much money to go around, and cosmetic repairs on public buildings are rather low on the list in a country where the average retirement age on a government pension is 56.

I do not have that problem. When my house starts looking ratty, I fix it. Eventually.

I contracted with my favorite lady contractor (her term) to have one of her expert teams paint my house. That was in May or so.

We have been going through a mini-building boom in Barra de Navidad. She said she could schedule me for October. And two weeks ago, George, the engineer, showed up with three painters: Martin, the maestro, and his assistants, David and Victor.

They have been working twelve-hour days (five on Saturday) to restore the patio to its original luster. The front of the house gets very little sun and will not require painting for a year or two. I will probably paint the interior rooms then.

They have been meticulous. Metal grills were sanded and primed. 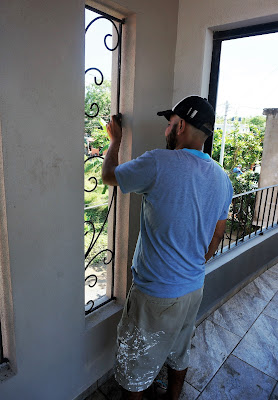 All of the walls were pressure-washed. 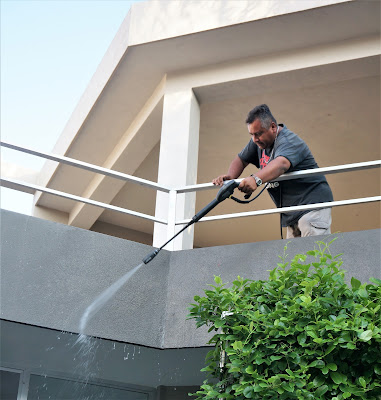 Dead grout was disgorged and replaced. 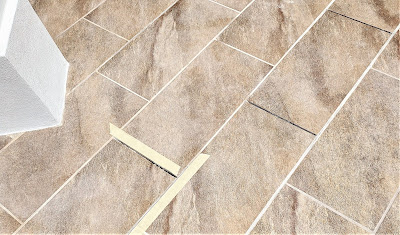 Borders were taped off.

I decided to use the same color scheme as the original architect -- with some subtle tone differences. The gray-coffee-cream look has served the lines of the house well. 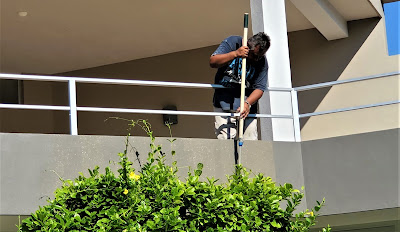 And it is those lines that explain the length of time involved in this project. The house is all about straight lines and acute angles. The result is that there are very few areas that are simply flat planes.

When Martin started the job, he asked about the scattered paint spots from the over spray of the communication tower next door. He wanted me to know the spots were not his. I would never have thought they were. His crew has put down enough cloth on the ground that it looks like a Christo sculpture. 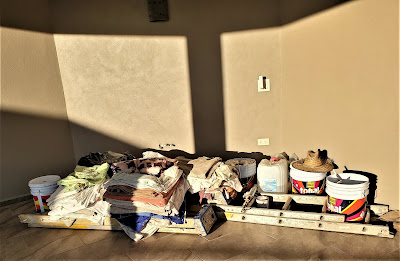 The mark of a good painter is that there are no marks.

I have avoided asking Martin the question Julius II repeatedly asked Michelangelo: "When will you make an end?" Because every painter knows there is only one answer: "When I am finished."

The estimate is that the project will be done tomorrow. This morning's rain made me doubt that was possible, but the clouds are clearing and the crew is busy at work. That is good because I have a family matter that will eventually require my presence in Oregon.

But, today sounds like a good day for grilled chicken with the crew. In my almost-completed Sistine chapel.