goobye and hello to our favorite nun 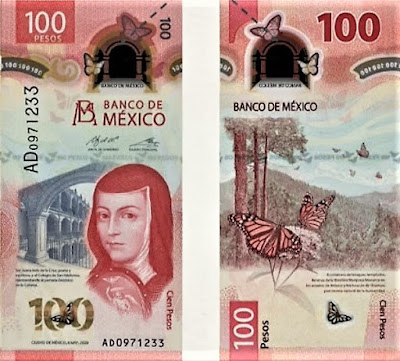 Season 4 of The Crown debuts tomorrow -- introducing some new cast members and dropping others.

The Bank of Mexico has been doing the same thing since 2018 with its banknotes. Like all countries, Mexico uses its currency to celebrate its history. And Mexico has a lot of history to celebrate.

This will be the third set of new banknotes since I moved to Mexico. The Bank of Mexico regularly shuffles around the historical cast members featured on its notes -- or replaces them with new faces.

Yesterday the Bank unveiled its latest revision. A 100-peso note featuring Sor Juana Inés de la Cruz to represent Mexico's history as a Spanish colony. It is the first note in this series to be produced in portrait orientation instead of landscape.

Sor Juana Inés de la Cruz is not a new cast member. If you look in your wallet, you will see her on an older version of the 200-peso note.

Most of us were very happy to hear her face would continue to grace a note because she is one of Mexico's greatest literary figures. A woman, a nun, a writer. She fills a lot of cultural boxes.

If you have taken a Spanish literature course, you will have read works written by Juana Inés. Especially, her poetry. She is acclaimed as one of the great writers of the Spanish Golden Age of Literature.

But she is an interesting choice to represent the Spanish colonial period in Mexico. First of all, she is a woman. In the 1600s being a woman gave a person very few social rights. Worse than that, she was born illegitimate.

She did have one leg up, though. Her mother’s family was very wealthy. Juana Inés grew up in the hacienda of her grandfather. And, in that hacienda, there was a library that would change Juana Inés’s life -- and Spanish literature.

She learned to read and write Latin by the age of three. She composed music. By eight, she was writing poetry. In her teens, she was known as a philosopher. She even learned to speak and write Nahuatl (the language of the Aztecs).

The chief road for a colonial woman to get ahead in life was to marry well. But an illegitimate young woman who was far better-educated and more intelligent than most of the men who would court her, was not prime marriage material.

She briefly served as a lady-in-waiting to the wife of the Viceroy of New Spain. But she found it stultifying. When courtiers would propose marriage, she turned them down. She showed absolutely no interest in becoming a man’s wife.

Instead, she became the bride of Jesus by taking the only other social road open to her. The church.

She became a nun. In her convent outside of Mexico City, she acquired a library and set up a salon where the intellectual elite of Mexico City could (and did) meet.

Her writings, that she shared in her salon, could be very biting.

If you have not read any of her poetry, you can still read it on the old 200-peso note -- a couplet from her “Philosophical Satire.” (I am not certain if the couplet survives on the new note. The photograph appears to include some of her work.)

women with so little cause,

not seeing you are the reason

for the very thing you blame.

You can feel the acid dripping off of the couplet.

The church did not mind that this very intelligent nun was willing to write about feminism and controversial theology -- even writing some rather explicit lesbian poetry. But the Bishop of Puebla was not going to allow her to attack the social patriarchy -- especially to call it incompetent and hypocritical.

He ordered her to get rid of her library, her compositions, and her musical and scientific instruments. She complied and refocused her duties in nursing the ill. Within a year, Juana Inés was dead -- from the plague, contracted while attending her fellow stricken nuns.

Juana Inés is a noble figure. She seems almost modern. Her sex and illegitimacy may have been a social handicap for her, but there was another that infected colonial life in Mexico

Spanish society was notoriously hierarchical. Being near the top of the pyramid mattered a lot to people who wanted to be successful.

During the 300 years Spain ruled Mexico. Mexico was merely a Spanish possession, with the Spanish born in Spain riding herd on the rest of society. It was just a matter of time before the tension broke the order.

But, that is another story -- the Mexican War for Independence -- that is already honored by the new 200-peso note.

Before yesterday, the 100-peso note featured Pre-hispanic Mexico with the portait of Nezahualcóyotl, a poet-king. The appearance of Sor Juana Inés de la Cruz on the new 100-peso note consigns him to the role of former cast member -- along with Diego Rivera and Frida Kahlo who were removed from the 500-peso note.

When all of the shuffling is done in 2022, Mexican banknotes will be a chronological list of Mexico's history. Or, at least, the major events we are all familiar with.

500-peso: War of Reform; Restoration of the Republic