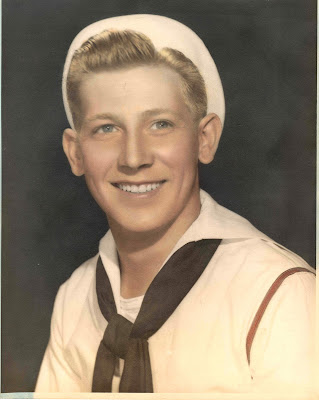 Yesterday afternoon I attended a memorial service for my uncle Frank. He died while I was on my cruise in the Atlantic. The news was not entirely unexpected. But it was still a shock. Of that generation, only my mother and her sister, Naomi, survive.

Frank's daughter-in-law put together a very touching retrospective of Frank's life. The video presentation was made up of a mélange of photographs from Frank's youth through his marriage and on through his senior years. But most of the photographs were of Frank in uniform: first in the Navy during the second world war, and then as a career man in the Coast Guard.

The comparison of generations is not entirely fair. The lack of a draft and a military far smaller than when Uncle Frank or I were of age to serve has had an impact on the numbers who serve. But there is a larger factor. Our sense of community, our sense of sacrifice, our patriotism has changed -- across the political spectrum.

The use of the word patriotism seems to be self-limiting -- as if it were a vaguely unsavory term. Instead, I hear politicians touting words like "unity," instead. And I am not certain what that means. I do not trust "unity" any more than I trusted Richard Nixon's "Bring us together" rhetoric.

What I do trust is the self-denying patriots of men like my uncle Frank who fought the good fight during three wars -- and was always willing to give up everything to ensure his family, his friends, his neighbors, his fellow Americans would have an opportunity to live one more day in a country they loved.

The best memorial we can provide him is to honor the sacrifice that he and his generation provided to us. And to honor his patriotism by showing the same denial of self as we reach out to others.

To all the men and women who have served our country and have fought to give us our freedom, I thank you. Thank you!!