won't you be my neighbor? 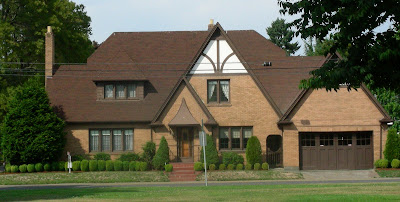 This photograph is my past and my future. Rather, it is the past and future of my house in Salem.


In the early 90s, I would sit in the research room of the Oregon Archives and look across the lawn to a Tudor-style house. The house set a tone for the entire neighborhood. There was something vaguely Wayne Manor and Mister Rogers about the place.


When a house came available in the neighborhood, I bought it immediately. And there I have lived for 15 years.


Late last year, the owner of the Tudor house died and the heirs put it on the market. "Market" may not be the correct word. It appears to have slipped into a financial warp. In the time it has been on the market, the asking price has been cut by 20%, and it sits unsold looking as if few buyers are interested.


Why does the fate of the house matter -- other than we all care when something like the housing market shows sign of distress? The answer is simple: if that house is having troubles in this market, so will mine.


Here is where we are on moving plans. I do not have a date certain for retirement yet. But let's use April 2009 as a target date. I have three options: 1) sell the house; 2) let it lie fallow for the first 6 months of renting in Mexico, and 3) rent it out.


If I am going to choose option 1 or 3, I have a lot to do around the house to get it into market shape. Most of those things involve the fact that I have had a large dog living in the house. A large dog that was a very destructive puppy. That also gives you a hint of how long some of these repairs have been pending. The dog is 12 and a half years old.


Items like new carpets and refinishing hardwood floors make no sense while Jiggs is still living in the house. But his new-found health may mean that I need to work around him.


Taking into account how long my neighbor's house has been on the market, I had best start talking with my realtor to see what I need to do to attract buyers. At least, I could then get a plan put together.


I know that several of you put plans together that took longer than you had originally thought.


I am not opposed to leaving the house unoccupied in my absence. And, if I cannot find a willing buyer or renter, I may need to do that (or some version).


Does anyone have a better idea? (I have already thought about just jumping in the Escape with Jiggs and leaving my keys with the realtor. Who knows? It just may come to that.)

Even left vacant, taxes and insurance will continue, so I would suggest you rent it. Your fix-ups will be less than you would need to do for sale and you might leave the old carpet until the renters leave and you put it on the market.

Our son in Mexico City has a house on Bainbridge Island in Washington that he has rented to the same people now for two years. The rent is low because the house needs remodeling (that was tabled when they moved) and he just signed another year lease with them. He still is out of pocket a couple of hundred a month but the place is safe and occupied and they are in love with and maintaining the landscaping. Worth a lot.

Jump into the Escape with Jiggs, and leave the keys with a Realtor. Leave the furniture too.

Tough decision. We left our place empty during the first 6 months we were down here for the winter. No problems.
On the other hand I had major problems with renters in other homes that I owned. Filth, destruction, non payment of rent, you name it, I dealt with it. Would never do that again.

Nancy -- The vacant option is not very attractive for all the reasons you state. And then there is the issue of being a burglar magnet.

Michael -- That option is looking more attractive to me every day.

Brenda -- The renter option concerns me. I rented out my home one time and was very lucky. Nancy's son appears to have a great renter. But my landlord friends tell me those are the exceptions. Selling (if possible) sounds better and better.

Steve, there may be reasons why that other house hasn't sold - priced too high; major repairs inside; Your replacing carpet and refinishing floors can be done in two weeks max.......It is daunting but sooner or later, it all has to be done. You'll probably have to repain the entire interior too but that can be done also. I did sell it all. I'm SO glad. I DO NOT recommend renting - I did that a long time ago and it was a NIGHTMARE....... But, on the other hand, if you think you want to go back and live there - let it sit for 6 months or have a house sitter! There are bonded services!

Babs -- You are correct about the Tudor house. As much as I like it from the outside, I would never buy it due to its chopped up interior. What I need to do is sell the house to someone who would like to walk to work rather than commute from Portland. The problem with gas pricxe hikes is that people soon get used to them. When I move, I would like to cut off my exit plans. Cortés had the correct idea -- burning his ships, that is, not sacking Tenochtitlan.

Steve, it was SO overwhelming for me......I brought it down to manageable size by taking it one room at a time at first - getting rid of EVERYHTING in that room that I wasn't taking to Mexico. Either, Salvation ARmy, garage sale, consignment shop or the kids. BTW, in my previous post I said "Paint everything" - the t got dropped. I have to believe as lovely as your hous looks that it will sell if it's in close proximity. I had NO idea mine would sell to the first person! YIKES! THEN I WAS committed........

Babs -- I actually liked "repain." It had the ring of truth about it. My last house sold the first day on the market. I just need to be flexible -- I know.

Steve - try praying about it.

Steve,
I think you have said in the past that you do not have a TV. If that is the case then you can’t watch a show on HGTV called Designed to Sell. There are a few different hosts and locations where they film. They only have a budget of $2,000 to fix the reasons that the house won’t sell as is. I am always amazed at what they do with that budget to bring the house to where they need to be to sell at the asking price or even higher.
I have good friend whose husband is a contractor (very trust worthy)who works with his clients at a very reasonable price if you need someone to give you an estimate as to what it would cost to prepare you home for sale. Also I can recommend a couple of really good realtors that I would trust to sell my home.

I hate to say this, but the financial economist within me cannot keep quiet.

You will sell your house the minute you ask a market-clearing price. What's going on now is that sellers haven't adjusted to the new reality that real estate isn't worth what we all thought in the past few years. And it's not clear that even a 20% discount from 2005's prices is the new reality. It's probably lower.

By renting out your house, you simply postpone the pain. This real estate market isn't going to correct within 18 months. It will be a matter of years. And at that point, you might as well just sell and move on.

By the way, I suspect that Mexican real estate is likely 18 to 24 months behind that of the U.S. Their economy is slowing as well, and especially in expat havens, pricing depends on Gringos being able to sell at high prices. I'd also add that the housing boom and now bust has been a nearly worldwide phenomenon. More reason to rent in Mexico.

I wish you the best, but you are probably far better off accepting the current market clearing price and moving on than hoping for a price-insensitive buyer.

Bliss -- The best piece of advice I have had all week. And I just taught my Sunday School class where we should start with all of our issues. Thank you for being such a great counselor.

Kim -- The Portland-Salem market has kept its value, unlike other markets. So far, the bust has not hit here. Homes are simply taking longer to sell. But you are correct, waiting is not a good idea -- not if I want to sell within the next five years. I have no sentimental attachment to this house -- or any other house, for that matter. I need to get my realtor over here and get started on marketing. (And just as I say that, Jiggs has thrown up twice in one night on the carpet that desperately needs cleaning.)

Jackie -- My realtor has a keen eye for what works in this market. What we need to do is to attract an agency head away from Portland -- someone who will enjoy the ease of walking to work and to downtown Salem. As for realtors, they are everywhere within my family and friends. But thank you for the offer.

Our situatin is different because we plan to return. We love our house and neighborhood so renting in Mexico and renting our house made sense.

I have never owned rent property so it will be another part of our adventure to see how that part goes. We are using a property mgr so that helps the hassle factor.

It was LOTS of work to get house ready. Just like if we were selling. I 2nd the "room at a time advice" on clearing out and fixing up. It can be overwhelming.

I wonder if a note on the bulletin board of your employer would make sense. There are some well paid people there who could surely afford the price and would love to be able to walk or bicycle to work. Get some of those PDX people to realize what a treat you have for them. Clearly I agree with Bliss, but then you would have to leave it in someone else's hands and not live by Phil 4:6,7. Finally I thought I had experienced my last roundtable discussion with you 11 years ago, but you seem to be able to keep them going with this new medium. Wonder how you will do in Spanish! LOL Alan

Al -- Good idea about the bulletin board. I never thought of it. Once people start getting used to high gas prices, that argument will lose its allure -- and we know how fast that happens. I remember a friend in 1973 telling me that if gas ever got to $1 a gallon, he would stop driving. He still is.

This has been a good topic with some very good ideas. But not quite like the lunch discussion table of old.