giving thanks by the forkful 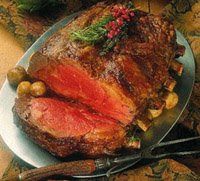 Yesterday Billie posted her 1986 Thanksgiving menu. As I read through it, I realized I have no idea where each of the elements of my current holiday dinner originated. But I know the source of the food philosophy that launched the menu.


When I moved to my house in Salem, it offered an alternative site for family holiday dinners. My brother lived in Bend; my mother in Gladstone. We were all within a three hour drive of one another, giving us three possible site for holiday dinners.


Somehow, I fell under the spell of postmodern cuisine. The symptoms are readily apparent. If it is traditional, it is forbidden at the table.


I was exposed to the primitive roots of the philosophy through my mother. When it comes to holidays, she is an original iconoclast. Rabbit for Easter and venison for Christmas were not only original culinary choices; they were political comments on non-religious symbols.


The first item to be exiled from my holiday table was the turkey. I consider other birds, but pheasant was too effete and chicken too pedestrian. Thus arose the two giants of the Cotton table: prime rib roast and leg of lamb.


Appetizers were banned. Not because I do not like them. They simply get in the way of Serious Eating.


I am going to have dinner at my aunt's house this Thanksgiving. But, if I were to cook at home, this would be the menu.


We would then sit down with a cheese, fruit, and pepperoni board to play a few rounds of Balderdash.

If I thought you could get those items in Mexico, I would be at your house for Thanksgiving next year!

I love Balderdash but could never get anybody to play it more than once because I always won by a landslide. I don't know if that means I have a good vocabulary, a vivid imagination or I am good at lying!

Have a great Thanksgiving!

Steve, I love your menu but it would be my Christmas menu. I love turkey so while I like to experiment a bit with holiday dinners, I can't give up my turkey. When we had a house full of boys, I cooked turkey often...not with dressing and the traditional T'day menu but just as a cheap protein to help fill up teenage boys. Now with just Ned and me, I seldom get turkey except at Thanksgiving. So no way I'm changing that part of the menu. Happy Thanksgiving from Mexico.

Steve, love the menu, and I love Balderdash. And I can't get anyone in my house to play it. Wayne, I think if you're good at Balderdash, it's because you're good at reading other people (the engineer gives a technical definition). I bet lawyers are really talented at Balderdash (and that's not an insult)! :)

P.S. We're having turkey and all the fixin's.

Wayne -- I have seen prices for prime rib roast in Mexico. If I cook it up for a holiday, I may not be able to eat for a full month. Have a great Thanksgiving, pal.

Billie -- I have two alternating holiday menus. The other involves leg of lamb -- and that is difficult to get this time of year for either holiday. I do not mind turkey, but it strikes me as being just a bit too bland as a centerpiece for a holiday meal. My brother's family and my mother are getting together for Thanksgiving on 6 December. We may end up at my favorite Portland turkey eatery -- Huber's.

Life's a Beach -- I do all right at Balderdash. My great weakness is that I am always tempted to go for the cheap joke and forego a point, rather than trying to bluff my opponents. My niece seems to have inherited the same gene. She must have been about seven when she offered one definition: "a fish-killing donkey." I do not remember the word we were defining, but the phrase now sums up the game for all of us. Enjoy the day!

Oh, thanks! I bought a bag of new potatoes yesterday and hadn't thought of roasting them, but that's what I'll do, with a gloss of olive oil on them and maybe some herbs.

Your post really brought on a flood of memories. We may have had the same mother. Mine refused to do anything reeking of “traditional,” and each holiday had to be something different. More than tradition, she deplored turkey, she meant that we grew to crave it. Consequently, we only got it in the summer, when it could be cooked outside in the electric roaster, sparing the odor from permeating the interior of the house.

There are two kinds of people: those who are hosts and those who are guests. My tradition was to be a guest. That way, I manage to observe a lot of traditions, more than few times returning home, thanking my lucky stars that I'm not part of *that* family tradition. All right, most of the traditions are nice, but experiencing some of them once was enough.

Actually, that's the way I was raised. My mother's tradition was to do something different each year. One year, she thought it killing the very chickens that would grace the table later that day would be not only fun but instructive, just in case we would need to kill a chicken sometime to survive. It memorable all right: she thought my stepfather was having a heart attack, only to find that he was praying for the chicken before its demise. The chickens didn't taste very good, as might be expected for suburban chickens, but at least the memory remained. We invited sailors from the naval base into our home one year, and a few were amazed that anyone would get out the good silver for strangers. I spent one Thanksgiving working my shift as a Candy Striper, thinking it was very cool not only to escape a celebration but also to get double Candy Striper points for working on a holiday.

Have a great Thanksgiving.

Bliss -- A good use for new potatoes. I doubt my aunt will have them. Her table is the core of tradition.

Jennifer -- Nice listing of an interesting life. Do I hear a post coming on?

Have a great thanksgiving, Steve. And if you aren't a dominoes fan, you'll have to give it a try when you get down here.

We roasted new potatoes yesterday. It's one of those winter things. Although I didn't have any rosemary to go in the pan while they were roasting!

Next year we'll hear what your Mexican thanksgiving is like!

It'a kinda funny that I never worry about WHAT the food is - it's more about the people who are, or aren't around the table. BUT when there weren't reall mashed potatoes today,I was secretly disappointed.......BUT all those around the 4 tables added so much to the joy!
Happy Thanksgiving Steve and all of you..........

Babs -- I am with you. People trump turkey. I care far more about who is playing Balderdash than who makes the best side dish. And that is why I am looking forward to getting together with my family for Thanksgiving-Christmas on 6 December.