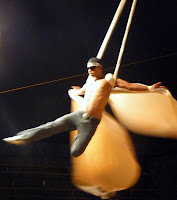 Little girls dressed as Cinderella.  A boy with one glove and a gold lamé top hat -- as if Michael Jackson was playing the Mad Hatter.  Three brothers in foam rubber trick ties.


The line waiting for the midnight showing of The Rocky Horror Picture Show?


Not in Barra de Navidad.  They were a portion of my comrades standing in line for Wednesday's circus performance.


I mention only children because at least 70% of the audience was children.  From toddlers to teens.  And they were as juiced up on circus love as any children could be.


Now and then each child would stare intently at the tent flaps as if it were the entry to a womb of magic and mystery.


OK.  Let me take off my Carlos Castaneda* sombrero for a moment.  No more Mexican mysticism for this post.


My night at the circus was not a night at the opera.  There was plenty of humor.  But none of it Marxist. (Groucho, that is.  Not that sauerkraut Karl.)


At least half of the acts were clownish.  In the manner of clowns.  Clowns in a Mexican sense.


The children thoroughly enjoyed them.  But their childish Spanish is better than mine.  Even though I suspect we both managed to miss most of the double entendres aimed at the adults -- who laughed in that hide-it-from-the-children manner that every parent manages to develop.


Everyone laughed at the clowns.  Mainly at slap stick routines that are older than yours truly.  One classic -- the mirror mime -- is as old as the Marx Brothers, if not older.


Even the appearance of the satanic Barney brought whoops of joy.  The purple dinosaur may be recognized as a saint in Mexico, for all I know.  His image was plastered on placards right up there with the Lady of Guadalupe.


But there was more.


A very Mexican version of the Cirque du Soleil silks -- cool and arrogant in silver and shades.  Quite good, but far too short.


A unicyclist with the johnny one note trick of skipping rope while pedaling.


The unicyclist then did a reprise as a high wire artist where he rode across the wire on a -- unicycle.


And "trained" animals.  A zebra.  A horse -- with running mounts and dismounts by the silk aerialist.  And 3 misbehaving Shetland ponies, who did more back biting than a Senate caucus.


The tiger and leopard that were displayed in trailers towed through Barra to draw in the crowds did not make an in personam appearance.  After watching how well the ponies were trained, I was happy enough to forgo the possibility that a leopard might decide to sit in my lap rather than jump through a fiery hoop.


The sales pitches actually raised my spirits.  A recent poll concluded that Mexicans see themselves as one of the most non-socialist people in Latin America.


Having toted up the experience, I reluctantly conclude that the circus was a bit lame.  I wanted to like it.  And I did not expect a whole lot from it.


But I have seen under-financed circuses that managed to create a world of mystery -- even a tawdry one.


I am glad I went -- having surrendered to the spirit world of the zebra, tiger, and leopard.  But I doubt I will walk in their shadows again.


* -- Yes, I know Castaneda is Peruvian.  But the reference is a literary device; not a literature course.

Oh well, thanks for going in search of the magic. Believe it's always better in old memories.

Sounds as tho some of the little ones liked it.

"....the woods would be very silent if no birds sang there except those that sang best..."

Certainly not a literature course - but it could be noted that Castaneda was a naturalized U.S. citizen who died in 1998. He was cremated and the ashes were sent to Mexico - all his mystic writing was 'experience' he had in Mexico - so it fits better than you might have led us to believe ;-)

I don't think Don Juan would have been a circus fan - incarcerating wild animals would not have been his thing.

Sauerkraut Marx? And then you have the temerity to slip in that Mexico sees itself as the least socialist country in the world?

You remind me of my late auntie who would give me lectures about the dangers of alcohol while sipping her sherry.

My suggestion is another dose of circus mysterium to dislodge you from your dogmatic reality.

I would even buy you the ticket, even though I would have to see it as another stealth tax on the poor to those who ride around town in Cadillacs.

Mic -- The children were enthralled. They eat up corny humor.

Calypso -- Once again, I am correct for all the wrong reasons. My only concern about the wild animals is that they seem to be caged for no reason other than to draw folks. It makes me wonder if the cats ever get out of those tiny cages. Maybe the real animal trainer was on vacation.

ANM -- Ah. I knew you would hear the vocal pun in sour Kraut.

I remember that circus from last year. I even saw the big cats when they were on the road and stopped for gas, felt so sorry for them in the heat. Didn't actually go see the performance, but we passed the tent often and I was curious. Now my curiosity is satisfied, a year later. Gracias, amigo.