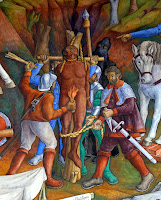 If you have been reading this blog for very long, you already know that.  But, I love history for a very specific reason.  It is all about stories.

And I am about to tell one of those stories.  To understand the area around Pátzcuaro, it helps to know who its people are.

I have always been amazed at how quickly Hernán Cortés was able to conquer Mexico.  He started the conquest on the east coast in 1519 with about 500 men, 13 horses, and a few cannon.  Barely a decade later, he was establishing cities on the Pacific coast.

We all know the story of how quickly he defeated the Aztecs -- with the aid of Indians who were glad to be rid of Aztec rule.  The destruction of the Aztec Empire made the next step for Cortés a lot easier.

The second largest Indian political organization lay between Mexico City and the Pacific coast -- the Tarascan state of the P’urhépecha. 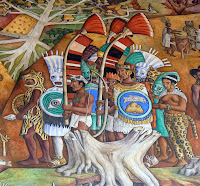 In the early 1300s, the P’urhépecha were scattered bands of individual communities.  A tribal leader, Taríacuri, joined the various bands together -- eventually establishing a political entity consisting of the current state of Michoacán, and about half of Jalisco and Guanajuato.  The second largest empire in Mexico.

The largest, of course, was the Aztec Empire.  As was inevitable, the P’urhépecha and the Aztecs became sworn enemies fighting a series of battles -- battles that the Aztecs lost.


The P’urhépecha were fierce warriors.  But they also had geography and technology on their side.  Their empire was mountainous and they knew how to forge copper and bronze into weapons.

When the reigning king, Tangáxuan II, heard of the defeat and destruction of the Aztecs, he decided to salvage as much of his empire as possible by entering into a peace treaty with Cortés.  Whether that was a wise move or not, we will never know.  But it did not turn out well for the P’urhépecha.

The Spanish decided the P’urhépecha had far too much autonomy.  And, at this point, one of the most infamous characters in the conquest comes on the scene -- Nuño de Guzmán.  In a melodrama, he would play the role of the top-hatted villain.

Guzmán was appointed as governor of the region.  He treated his Spanish enemies harshly.  But he reserved a particular hatred for the Indians.  With the help of a traitorous P’urhépecha noble, Guzmán overthrew the P’urhépecha political structure, tortured and burned alive Tangáxuan II, and enslaved the Indians he did not kill.

To the credit of the Spanish crown (and that is not saying much), in 1536 Guzmán was arrested, stripped of his offices, and shipped back to Spain in chains because of his reign of terror. 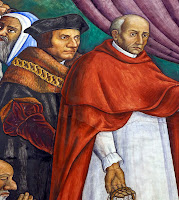 And, in an almost Zen-like balancing of yin and yang, one of the white knights of the conquest arrived as bishop of the area that same year -- Vasco de Quiroga.  A student of Thomas More, Don Vasco saw an opportunity to do a little nation-building based on More's Utopia.  The Spanish had stripped the Indians of their social structure and economy.  Don Vasco provided it.

The Tarascan state was built around areas that specialized in certain crafts or products.  Don Vasco built on that concept by finding teachers in each craft and then creating a monopoly for each village in that skill.  Such as woodworking or copper forging.  When he died, Don Vasco left a legacy of communities that were self-sustaining.

Tomorrow we will put these pieces to use by starting our journey through ancient Tzintzuntzan, and then take a quick stop at modern Tzintzuntzan.

That was upon landing in Vera Cruz. I have seen the number as high as 16.

Guzman had lots of Spanish enemies, as well. By the time he had arrived, there was a split between Guzman and Cortes. Guzman treated his Spanish political enemies in the same way Castro does.