mural, mural on the wall 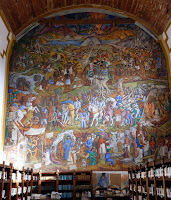 Now and then I see a piece of art that connects with me.


The first time I saw a plate of my favorite art piece -- Donatello's Mary Magdalene -- I knew I had to see it in person. And I can still remember how awed I was when I saw it in Florence.


Juan O'Gorman's work is definitely not in that category. But there was something that connected with me when I saw his mural of the history of Michoacán in the Gertrudis Bocanega Library.


Mexican muralism is world famous. Mostly through the work of Diego Rivera, a man who may have had talent but failed to prove it as a lackey to political power.


O'Gorman's mural covers the full north wall of the former church that serves as Pátzcuaro's public library. The space needed to be monumental because the subject is the full history Michoacán's history from creation to 1917 -- with two anachronistic touches from the 1940s.


It is easy to guess the artist's politics. The piece is set up in an Hegelian dialectic -- with thesis, antithesis, and synthesis. And it is painted in blatant Socialist Realism -- admittedly with a Mexican touch. If that leads you to the conclusion he was a red, you would be correct.


O'Gorman is an interesting guy. Trained as an architect, he tried his hand at several monumental murals.


His Marxism screams out in his work -- like most of the Mexican muralists.   Well, maybe not as bad as Diego Rivera with his idolization of Marx and Trotsky.


But he was also a humanist. And, I suspect, a bit of a libertarian at heart.


The mural is divided into three distinct horizontal bands reflecting the historical determinism of chaos to revolution.


The top band is merely an introduction reflecting the chaos of creation. 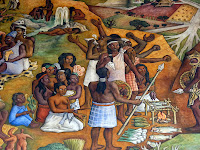 The first historical band (the thesis) shows the arrival of the P'urhépecha.


As a communist, O'Gorman is not a sentimentalist. Unlike many of my expatriate friends, who believe the Americas were a place of utopian harmony before the Europeans arrived and ruined everything.


O'Gorman does slip into a bit of Rousseuian "noble savage" imagery. We see family groups cavorting with imps. Women dancing naked before their god. And other women lolling beside a pool -- with an obvious tip of the beret to Gaugin.


He even shows the barbarity of tribal life by depicting in graphic detail the mass execution of Aztec warriors taken in battle. The P'urhépecha were determined to survive. And to do that, they needed to be as cruel as their neighbors.


And, because this is a tale of political power, he depicts the first P'urhépecha emperor, Taríacuri, as a proto-Marxist hero, uniting the various villages into what would be one of Mesoamerica's great empires.

But historical determinism cannot stop with such a flawed character. Thus arrives the antithesis (in band two) -- the invasion of the Spanish. Because this is the history of Michoacán, the invasion means the arrival of Nuño de Guzmán.


And here O'Gorman slips into comic book reductionism. (Of course, no story is good without the arrival of pure evil.)


We have already met the Spanish commander who is still loathed by locals. Thus, O'Gorman could feel free to portray him as a beast with fangs -- because that is exactly how Nuño de Guzmán saw the Indians.


There is no glory of humanity in this land. Only torture and murder.


And we can see a little bit of O'Gorman's political view of his own time. 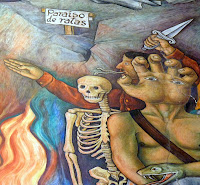 At the far right in the antithesis band appears a familiar face from the 1930s and 1940s. Small moustache. Swooped hair. Roman salute. Brown shirt. It is the unmistakable visage of a creature equally as evil as Nuño de Guzmán -- Adolf Hitler.


Of course, this was after Hitler had betrayed Stalin in their anti-aggression treaty when they divvied up Poland between them. Only one party to that dirty deal appears on the wall.


Being a Hegelian, O'Gorman must resolve the conflict between the thesis and antithesis with a synthesis. And that he does in the third historical band. 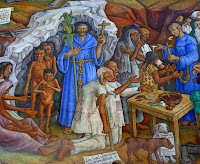 At the far left, the Franciscans arrive with Christianity and charity. But that does not improve the material lot of the Indians.


The next panel is of the local savior, our old friend Don Vasco. With Thomas More whispering in his ear, he brings crafts and trades to the P'urhépecha.

But O'Gorman could not let a Jesuit lawyer stand as the ultimate hero. After all, Don Vasco stood for Spanish colonialism as much as Nuño de Guzmán. 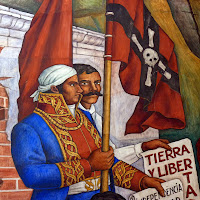 O'Gorman's coda is symbolised by Jose Maria Morelos, leading the Independence movement, and Emilio Zapata, bringing land reform to Mexico through the Revolution.


The drawing in the mural can be pedestrian. But the mural, as a whole, has a humane quality missing in much Mexican muralism.


There is one additional piece I cannot pass up. Most red art reduces the artist to a mere tool -- the method to convey the "truth" of the class struggle. Not so this piece.

O'Gorman's personality is everywhere. And not just in his choice of sinners and saints.

If you look at the lower left side of the mural, you will find a modern-dressed couple -- O'Gorman and his wife (who looks jarringly like Eva Peron).


That type of individuality would have got him shot in most communist countries. Not to mention his failure to show the ultimate historical inevitability of the Revolution and its creation of the workers' utopia.


Is it a perfect piece of art? Of course, not. In places it can be as two-dimensional as a DC Comic. But it caught my interest and made me think.


What artist could wish any more for his work? To get a libertarian to at least listen to a rather eccentric communist.