I do not believe in omens.  Just another bit of superstition as far as I am concerned.


I came close to falling into the augury trap during my highlands trek.  While driving around Lake Zirahuén, I had the feeling it was going to be my next stop in this Mexican adventure.


It wasn’t the mountains -- or the forests -- or the azure lake itself.  Even though all of those were factors.


It was dogs.  Well, a type of dog.  Golden retrievers.  I saw two of them on my drive around the lake.  If relatives of Professor Jiggs could thrive there, so could I.


Of course, that simply disinterred The Dog Question.  Am I about ready for another golden retriever?


And I knew that answer.  It was easy.  If I had a golden retriever during the past two months, I would not have been spending time in San Miguel or Pátzcuaro.  Traveling with a big dog in Mexico is difficult.  Very difficult.


When I get another dog, that will be an omen certain that I have decided to garage the Escape and put down some roots.  But not today.


Instead, today (or yesterday) I became the keeper of a dog.  A house guest dog. 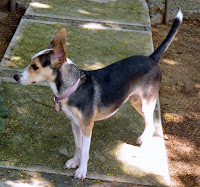 Tamara is one of those medium-sized bat-eared beaglish dogs that are quite common in Mexico.  Her Aztec roots may not be strong, but they are there.


She belonged to a family from Guadalajara who left her behind at the beach.  She has been in foster care for a bit.  On Friday, she was spayed, and needed to stay someplace where she would not be bothered by other animals.


My landlady knew who to ask.  I still have not divested myself of most of Jiggs’s dog paraphernalia.  So, Tamara showed up for a stay at the Professor Jiggs Spa.  Eating out of his bowls and enjoying a yard he never saw. 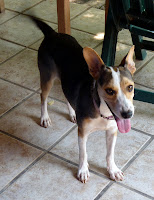 She moves on to her permanent home tomorrow.  And she will be ready.  I took her on a short walk around the laguna this afternoon.  Any after-effects of the anesthetic is gone.  She wants to get out there and strut her dog stuff.


And when she goes, I will stow the Jiggs kit until I decide it is time to rejoin the dog class once again.  Maybe at Lake Zirahuén.

I sat down at the computer and pulled up your blog.  My heart skipped a beat, there was Jiggs, full of life, ready to play.

I am sure Jiggs wouldn't mind sharing his toys with Tamara.

This little dog would have run circles around Jiggs.  But he would have enjoyed the challenge.

This little dog would have run circles around Jiggs. But he would have enjoyed the challenge.

Once you settle down and figure out where your roots maybe, a dog would be a nice addition to you life again. I can't imagine being without ours....

I have thought about living on the lake with a dog -- several times.

I think you are wise to hold off on the 'new' dog issue. After losing a family member of the canine variety I acquired a replacement  relatively fast. It was a mistake. I was not ready. It takes time to make such an adjustment discounting your moving about issues.

And there is no getting around the travel logistics issue.

she is a cutie. glad to hear she's found a permanent home. i'm enjoying my walks with my friend and her lab and feeding the cats whenever i can. i still haven't gotten used to the fact that i no longer have pets. i always feel like i need to close the door quickly so they won't escape.  wish i could bring home some of the kitties that are in bad shape and get them spayed, neutered and in good health. can't
risk getting evicted though.

have a great week!

Well there are a lot of bi-people, lake and beach is doable.....

I want a dog soon. And another cat. I am like you in that I am not home much lately. Maybe after this next trip to the States, I will find a few pets. The little beaglish thingie is cute!

Hi Steve - we sooooo did not want another dog after life with Sitka.  Yet when the dire situation of Rock was put before us, how could we say no?  And then we got a cat, Squeak, to boot!  I love these 2 guys like I had picked them out as babies although that is so far from how they came to live with us.  Yeah, they're a pain in the butt sometimes, but so is Mike!  HAHA

It is.  But doing the traveling I have been doing lately would not be possible with a big dog.

Tamara is still here.  The adults at her new home were not around this afternoon.  She may end up spending another evening.

She is cute.  And very alert.  She just chased the gardener away.

One of these days I will get another dog, I suspect.  But this is not the time.

What a pretty dog!  And I love that last picture with the tail wagging so fast it's blurred.

Kim G
Boston, MA
Where, despite growing up with dogs, we have two cats.

You pinpointed my fovorite aspect of that photograph.