when the magic goes out of the jack 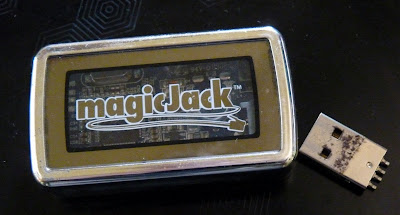 About three years ago, while I was making plans for my move to Mexico, my brother convinced me to buy MagicJack to make “free” calls through my computer to any number in The States and Canada.

He was a true believer.


I remember leaving a party at my boss’s Portland condominium.  While walking along the streets, my mobile telephone rang.  It was my brother.  The clarity of the call convinced me he was calling from Bend.


He wasn’t.  He was calling from Japan.  Using his MagicJack.  I became a true believer.


The little USB device I plug into the side of my computer has been one of my best purchases.  I am not much of a telephone person.  After five minutes I am usually ready to get off.  But it has kept me in touch with family and friends.


Until today.  While attempting to set up a conference call with my broker, the USB decided to do its South Carolina impression by seceding into two parts.


That is it at the top of the post.  If you look closely at the smaller piece, you will see something that looks like dirt.  It isn’t.  It is pitted corrosion.  I can only imagine what the electrical parts inside of the device look like.


As much as I like MagicJack’s product, their service department is a bit primitive.  It is cutting edge as far as technology goes.  But it is primitive in its customer service.


I discovered I could get a replacement USB for about $20.  But the FAQ section did not inform me how that could be done.


With a bit more digging, I discovered MagicJack uses a “chat” method to answer such questions.  I will spare you the details.  After 45 minutes of typing and waiting for my “service representative” to respond, I thought I was done.  (Italian customs agents could learn some new techniques from this process.)


When the confirmation email arrived, I discovered that the shipping address I had clearly described as needing all of the lines I had provided was stripped of all numbers.


For a moment I thought how convenient it would be to merely drive down to the nearest Best Buy and purchase a new device.  But Mexico is teaching me patience.  I am certain if I just wait it will arrive without any problem.


But, just in case, I found a workaround.  MagicJack has a new service called MagicTalk that does not require a USB device.  I will use it until my replacement arrives.


And the magic will return to my calls.  Unless San Miguel is a vortex that sucks the magic out of the rest of Mexico.

I always wondered about the Magic Jack. Thanks to you I just might try one next time I head down to Belize. Hope you get yours fixed, just as soon as Mexico allows...

I talk a lot to people in the USA - those that use Magic Jack are always static filled conversations.  Those that have Vonage sound like they are across the driveway. Hence, about two years ago I got Vonage and have been absolutely delighted.  Yes, it is more expensive - but, in my humble opinion, you get what you pay for in this case.  Plus, if someone calls and I'm not here, their voice message appears on my computer screen!
Sorry for your distress.........and good luck with the shipping situation.........do you have a Best Buy over there?  Wow.

I just noticed my blog is starting to look a good deal like a computer marketplace. It is about time for me to get out there on the beach.

My calls have always had good quality -- except when my internet is acting up.  Then, the upload/download speeds plummet.  Nothing works well under those circumstances.

Thanks for the good thoughts.

Go find a radio tv repair shop and have him solder on a 2 ft USB cable where you lot off one end, after soldering on the wires plop a big blog of silicon seal on the board to pot the connections to slow up your lost paradise oxidation traits....
The stuff you have to go through to live by the beach...

uh oh, our magic jack is about 4 years old.  We love it actually, clear sound, and we also get voice mail as an email.  I may need to check it for corrosion though, we're 20km off the beach but....

I have the same problem as Babs. I use Vonage. The cost is greater but they have great customer service, too. And I like the emails that are transcribed voice messages. Vonage is viable, too, because it's a permanent number with good service that I can take anywhere and keep my number.

Your final sentence is one of your best yet.

Magic Jack's reputation isn't all that good. I used Packet 8 with good results for several years before switching over to Skype Premium. A Texas virtual number, ability to call non-Skype numbers, and it's worked without a hitch. Skype has moved far, far away from its two-tin-cans-on-a-string beginnings.

Our problem with Magic Jack is that it requires a reliable and sufficiently fast Internet connection. We use Tel Cel "Broadband" internet, a small wireless device you stick into one of the USB ports of your computer. It works pretty well about 80 percent of the time; the other 20 percent you just have to go read a book and wait for it to come back to life.

Steve,on previous trips to SMA I brought my Majicjack and laptop, and really had no problems, even calling the UK without any issues. This time I took an ipad2. FaceTime connections to the kids were fantastic! I get the missus her own next... But connection to the UK was great as well (borrowed sister in laws unit for the call). So there is another alternative available if you have Mac friends... Just a thought..
Dan in NC

I suspect most of that damage was caused over a year ago when I lived on the edge of the ocean.  My new location is not as hard on electronic equipment.

I have a USB port that allows two devices to be installed vertically.  Due to the design of the MagicJack device, I am going to use one of those when the new one arrives.  Gravity can be cruel.  What was once my pecs is now my paunch.

And gravity.  The latter exists even in the highlands.

MagicJack has a permanent number that I have used since I bought the device.  And I like the voice messages MagicJack sends me in my inbox.  I would rather hear the person than read what they had to say.  In the end, though, it does not much matter.  I receive about one call a month and I make maybe two or three.  As I said, I really dislike the telephone.

I use Skype for only one of my friends.  Now and then he needs to call for long conversations.  The service has always been very good.  But I still like my MagicJack.

I have not yet been won over to the IPad.  I was tempted to get one when I was looking at e-readers, but, as you know, I opted instead for the Kindle.  The IPad was simply too difficult to read in sunlight and I do a lot iof reading in the light.

Internet is one of the services Mexico has not quite refined. But it is as good as American internet in the 90s. I am interested to see how well my rather limited service in Melaque handles Netflix.

Skype would get my vote in this little battle. It works on any PC, it's installed on most internet cafe PC's I've been on, and has all the features you've described and a bundle more you might find useful. I still get unlimited calls to the US and Canada for $2.99 a month. And Skype doesn't corrode when it's near the beach.... :)

And I use both.

Skype doesn't corrode....But the computer it's on, does.

As do those who converse.

From your photo, it appears that the Magic Jack could easily be repaired with a soldering iron and a little solder.

Perhaps. But a new one is on the way. If the address is as insufficient as I think it will be, I may need to resort to soldering. Of course, that will mean breaking open the case and probably taping it back together. The equivalent of nerd glasses.

To the dust from which we arose.

Really, a soldered, taped and otherwise patched magic jack should feel right at home in Mexico.

Kim G
Boston, MA
Where we are a big Skype fan.

And there is that.