laundress to the stars 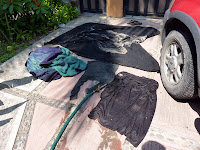 
Even though Melaque did not suffer much wind or surf damage, it did take a water hit.  For a day, Melaque was an island.  We had our own moat between us and the world.  Great for a siege.  Lousy for life.


But that moat turned people from neighbors to refugees.  Even one of the hurricane shelters was flooded out.


I have been really proud of the Mexican authorities when my utilities were quickly restored.  To a degree, I was feeling rather smug until I discovered that over 100 people (half of them children) from the flooded area were still living in a shelter.  Without food.


I believe the food situation is under control.  But we are not back to normal.


The reason the families are still in the shelter is the condition of their homes.  The flood took their possessions and exchanged them for rooms filled with mud.


During these crises it is very easy to get overwhelmed with the amount of help that is needed and where to extend assistance.


My landlady Christine is not a woman to get overwhelmed.  She is manages property and has the problem-solving skills of a Fortune 500 CEO.


Four years ago, Melaque was hit with a similar flood.  She volunteered to pick up and launder clothes and bedding from people who had been flooded out of their homes.  It relieved the families of one thing.  But a very meaningful thing.  Mexicans are one of the neatest people I know.


Last week Christine immediately drove to the flooded area and started taking bundle after bundle of clothes to her house where she rinsed off mud, washed the clothes, dried them, folded them, and returned them to the owners.  When I say she rinsed off mud, it was as if she had created an alluvial flood plain in her driveway.


The need was so great, she enlisted a few volunteers to assist her.


I accompanied her today to return laundry and to pick up more dirty clothes.  I started this post with the line: “Small gestures often have big consequences.”  That is not rank sentimentality.  It is reality.


When Christine returned the clothes, the young wife receiving them was fighting back tears of gratitude.  But she did not hold back on thanks.  As a rule, Mexicans do not indulge in the torrent of formulaic thanks that we expect up north.  But this young woman -- and her husband --- allowed her heart to flow.


While we were standing there, an elderly woman with a crude walking staff rushed up to us and with great animation asked for our help.  It was easy to see why.  She had a huge pile of laundry that she could not clean because her house still needed to be demudded.


Even as we drove away we had to stop because people came running behind us asking if we could help.


Christine is one of those people who seldom sees credit for the work she does,  And that is fine with her.  What she does, she does out of love for her community and her neighbors.


And she does not do it for the thanks.  But it would have taken a rather cold heart not be moved by the relief and gratitude that Christine’s small gesture created in that neighborhood.


She may only be doing laundry.  But she is doing it for the survivors -- the stars -- of this storm.

Now THAT story made my day.

Steve, I love stories like this - and I'm sure they are happening throughout the area, too.  Thanks so much for sharing it.

I can put my washing machine to work, too. Drop it off. I've offered to do that, but no one has taking us up on the offer, Steve.

Matthew 25:40 NKJVAnd the King will answer and say to them, 'Assuredly, I say to you, inasmuch as you did it to one of the least of these My brethren, you did it to Me.'  What more could I add?

Steve... This brought tears to my eyes. You have a true talent for putting to paper (or digits) such an emotional imagery. I feel like I know those muddy people struggling to recover from this, and I likely do since for 5 months a year I ride my bike around Melaque and every one of them always takes time to say "Hola Cristobal".
Thank You!!
Kip

i wish there was something i could do .   my friend lives in barra and insists that damage is minor.  but now im hearing that people/children are homeless..

please tell me what i can do

Christine brings to mind a lesson I learned in Sunday school.  "What you do for the least of these, you do for me."

I tell her that.

You and Jaye hammered the same -- and the correct -- point.

I am going to the neighborhood tomorrow. Now that my truck is up and running, I will drop some off for you. Thanks for the offer.

It is a great way to truly get to know your neighbor.

Christine is a great role model.

At the moment, we are sorting issues by priority. The shelter is closing to get people back to their houses. But there is still quite a bit of cleaning to do. The people who are here have the best assets to offer -- their time and hands.

You are welcome. I am hoping by the time most of the winter visitors arrive, it will be hard to know if there was a flood.

Now that's true charity, isn't it? Doing something unpleasant and time-consuming that someone else can really benefit from.

Kudos to Christine!! (And to you too!)

Kim G
Boston, MA
Where we have enough trouble keeping up with our own, non mud-soaked laundry.

Laundry is not my best work skill.  I get the impression when we do our pick up/delivery tomorrow, I will hear one of the old refrains.  "Thanks.  But when will that barber be open?"

Mexicans are one of the neatest people I know.Well, when they're not tossing garbage out of every car and bus window driving the city streets and country highways.This Christine, I'm guessing she's a Gringa.

This is a beautiful story. Seems like such a simple thing: doing laundry. But the relief from having clean clothes is immense.

Please thank Christine for me.

I shall. In fact, she will probably see this comment.

Like you, sir, she was born north of the border, but is now a Mexican citizen.

Steve  In Melaque there used to be a restaurant on the beach, Dos Pelicanos a Gringa & Mexican owner is it still there.

If it was there before the storm, it is still there. There was very little damage on the beach in Melaque. Nut in my three years of living in Villa Obregon, I have never been to any of the restaurants in Melaque. The furthest west I have been is to El Dorado in San Patricio. Go figure. I took a look on the TomZap map, but it lists none of the restaurants on that end of he beach.

I read about this the other day on TomZap and was so impressed with Christine's way of helping.  Thank you so much for writing about it in your blog.  I only wish I could be there to help in some way.

I suspect the cleaning may take some time.

Thank you for sharing this story, it inspires the heart to give in creative ways! And thanks Christine for walking the walk that many will just talk about walking :) Blessings to you!

She is a doer.

anyone have any idea how the Orientales in Obregon faired?

I guess I have no idea what that is. But it appears to be on Salgado. As I have said, there was absolutely no storm damage (other than a few rogue trees) in that whole area of Villa Obregon. The flooding was up by the highway. Salgado is not up by the highway. Thus, there was no flooding.

Kudos to both Christine and to you. If there is any way of sending a donation that would get to you or Christine to use in the recovery process,let me know.

At the moment, we need more hands than funds. But thank you for the offer. However, our church is putting together relief packages for people who suffered losses in the flood. If you are interested in contributing, you can contact Lou Moodie at wdmoodie@gmail.com for more information.

Steve,  Have never known you very well, but have developed quite a bit of respect for you and many others in the area thru reading the internet in the last week. Thank you for caring.

I am very pleased at how the community -- expatriates and citizens -- have pulled together to get this area back on its feet. What my neighbors have requested is very little, and it has been a pleasure to offer what I can. Now, we just need people from up north to come down her and open their wallets with folding money to keep the local businesses going.