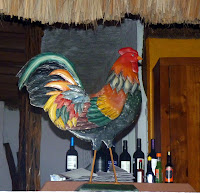 
That is one reason living in Melaque is a bit frustrating.  Most food here falls into two categories.


Category #1: Boring.  Even the best of Mexican foods is handicapped by a reliance on three basic ingredients.  And you can only recombine them in so many ways.


Category #2: Bad.  I have had more mediocre meals in the Melaque area than anywhere else I have lived.  And that includes eating in Air Force mess halls -- the unusual happenstance of a bureaucracy using a meaningful term.


About two weeks ago, I overheard a fellow diner talking about a new restaurant in town.  Chez Cedric.


The name sent me spiraling into gastronomic fantasies.  Pig foot with a pomegranate reduction.  Veal topped with a mango-pablano-onion salsa.  Lamb wrapped in sage and apricots.


But my fantasies were Pearl Harbored back to reality when I heard the place had one specialty: pizza.


I love pizza.  I could live most of my life on pizza.  But it easily falls into both the bad and boring categories here.


There are plenty of pizza joints.  But they are all summed up in an expatriate’s misplaced comment: “It is almost as good as Domino’s.”  And the quality descends from there.


With that in mind I headed over to Chez Cedric.  And I was pleasantly surprised by the décor.  I have come to expect pizza parlors north of the border to look either like bordellos or western trading posts.


Not Chez Cedric.  It is spacious.  Covered by an elegant palapa.  And the linen-bedecked tables are spaced sufficient for the most discreet of conversations.  Manned by liveried waiters clothed distinctly from the uniformed kitchen staff.


And get this.  Customers are welcomed by the appropriately-attired chef-owner at the door.  Charlie Trotter could not have played the role better.


The old adage that no one leaves a Broadway show humming the scenery applies just as well to restaurant ambiance.  I may have chewed the scenery a bit in my life, but I was at Chez Cedric to see if his pizza could survive the Melaque curse.


But not just any pizza.  Wood-fired oven pizza.  And that was what I had.


Pepperoni pizza.  With a bit of a test.  I have found that most pizza restaurants here are a bit distrustful when a customer asks for an additional item.  Onions were mine.  My waiter simply responded “certainly.”  An attentiveness that would continue throughout the rental of my table.


The crust was perfect -- avoiding the usual Hobson’s choice of cardboard or congealed library paste.  It was light and just crisp enough to complement an amazingly tasty and peppery pepperoni.  It was not Boar’s Head.  But it is the best pepperoni I have tasted in town.


And the tomato sauce was superb. As if it had been freshly made from sautéed tomatoes.


But the selling point was the cheese.  Creamy without being greasy.  And it had none of that chemical after-taste that haunts other pizzas.


The pizza was neither boring nor bad.  Making Chez Cedric part of a short list.

where is Chez Cedric? I'd love to try it out!

It is on the east side of Guzman between Morelos and Juarez. Or one block east from the jardin.

Many years ago there WAS a French restaurant in Melaque that was absolutely fabulous. The couple were French.  The best pate I had ever had and other exquisite dishes.  Unfortunately, they closed and moved to Cuestacuomate.  No longer in the food business.  At La Manzanilla there is a Dutch woman who has a palapa restaurant who cooks Thai, and seafood dishes.  Some of the best food I've had in Mexico!   I think her name is Yolanda which is the name of the restaurant.   She has lived all over the world and has a very eclectic menu.  Try it out!
The pizza sounds good.......

You are correct about Yolanda's.  She has very good food.  And it is unique.  Some of her Indonesian dishes are superb.

Send me your address, and I'll mail the gun. Quicker that way.

You have cholesterol, blood pressure and weight issues, and you still eat pizza?!

Wasn't it Sarte who said the purpose of life was to die bit by bit.  Or was that Sondheim?

I have no cholesterol issues.  Two out of three -- but you know the rest of that quotation.

I would have preferred the lamb wrapped in sage option, but you take what you get.

" Boring.  Even the best of Mexican foods is handicapped by a reliance on three basic ingredients.  And you can only recombine them in so many ways."

You said it! You admitted it!
I would qualify that statement that it tends to be thus in smaller, provincial towns. Pátzcuaro is one, Morelia less so yet not stellar. I exclude Mexico City, because some of the Mexican (as well as International) food there is great. I would exclude Oaxaca, also, but I have to test Oaxaca further before coming to a final decision.

It's a tough job, but we are prepared to tackle it.

PS: We had a very good couple of pizze recently at Pulcinella, in Morelia. Almost perfect the first time, and more than acceptable the second time. I usually avoid pepperoni and have better luck with other toppings.
http://mexkitchen.blogspot.com/2011/11/ristorante-pulcinella-morelia.html

Gourmet pizza........I have a new one to had to my favorite oxymorons list.

But, Jack, even the lowest of food forms can be given gourmet treatment. Having said that, I would have preferred the pig foot and pomegranate.

And don't forget the restaurants of San Miguel de Allende. Of course, their best restaurants tend to disregard the country in which they are located. And I think we both know why.

You should join us at el rancho one of these days.  Our food is simple, but better than anything you'll find at the restaurants in town.  And sometimes we lean towards more exotic fare like Criadillas.  :)

I should have added that I have had some incredible food in Mexico.  But Mexican cuisine around here is rather pedestrian.  I would love to sample your fare one of these days.

What I can always count on around here, though, is that the food will be fresh.  That means learning patience -- something I have done.  I was chuckling at a group of northern tourists today who were beside themselves because they had already waited five minutes for their order.

I had a great pizza at that wood fired oven place in Barra, Steve.  It wasn't cheap, but it was delicious.

I will give it another try. The last time I was there, both the sauce and the cheese were less than outstanding. I like the owner. But I was not impressed with the pizza.