strangers in the garden 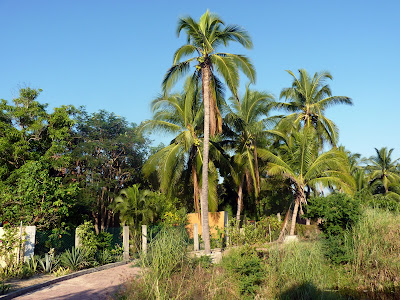 This is a view I see almost every day.  It is my garden as seen from the andador.


But today I saw it a bit differently.  I have just finished reading Charles Mann’s 1493: Uncovering the New World Columbus Created.  His 1491 dealt with the culture of the Americas before Columbus arrived.


1493 details what has come to be known as the Columbian Exchange -- how American products (such as, tomatoes, sweet potatoes, and corn) spread throughout the world and how Old World products ended up in the New.


Mann is one of those journalists who is easily beguiled by eccentric scholarly theories.  The kind of guy who has never met an iconoclast he does not like.  But he presents a good argument why the term “indigenous” is an almost meaningless term.  All people (and lots of plants) came to the Americas from somewhere else.  And we now live in a world that has been somewhat homogenized over the past 500 years.


My garden is a perfect example.  Almost nothing in the photograph at the top of this post is native to Mexico.  Coconut palms?  From The Philippines.  The Flamboyant tree?  Madagascar.  The banana?  South Asia.  Limes?  Persia.  Tamarind?  Sudan.  Even most of the grasses are from other continents.


Just as all the people in Mexico came from somewhere else, my garden is populated with trees and plants that were not to be found in the Americas in 1492.  Globalization is nothing new.


And I am happy with that end result.  After all, even though I am a native American, I too am an import.  Enjoying my retirement in a garden filled with other sojourners.

While those plants come from far away, they sure like the atmosphere here.

Coconut palms are not native in Mexico? I live to learn, and there's my lesson for today. I had guessed that the palm trees I sometimes park underneath in Bournemouth were shipped in from warmer climes though. I don't always notice them - only when I see their shadows on  a sunny day. The sun is also non native to the UK :)

Coconut palms were one of the first plants to be imported as part of the Manila Galleon -- along with Filipino workers to start the plantations.  There is still a rather large Filipino-mix community in Colima.

I've read excerpts from that book. Apparently the last ice age wiped out all the indigenous earthworms in North America. So certain plants, sugar maples in particular, evolved to live without them. When the Europeans brought them back, they ate all the fallen leaves, thereby starving the sugar maples.

There are parts of Minnesota that still have no earthworms, and they are trying to keep it that way, though I suspect it will ultimately be a losing battle.

Meanwhile, it's kind of fascinating to think of earthworms as invasive and dangerous, especially after a lifetime of hearing how good they are for the soil.

The world is often not what we think, which is fascinating.

Kim G
Boston, MA
Where we once managed to kill off most of the earthworms in our yard by bringing in a Bobcat and rearranging. But they're back.

The book is a pastiche of interesting facts like that.  I enjoyed it as light reading.  Far more journalist than scholar.

Have you the mongoose?

I am reading that book too.  Very interesting stuff.