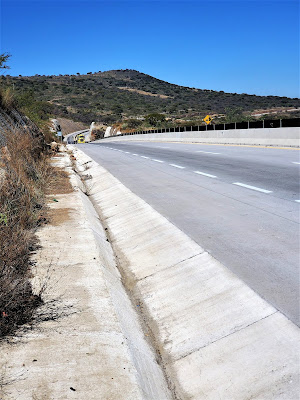 About half-way through My Favorite Year, Peter O'Toole tells the other television cast members, "This is the most fun and the hardest work I've done since the world was young."

That is what I felt about my California adventure with my friend Stan (driving adventures -- part 1) fifty years ago. That day has almost been pushed out of first place by another road trip this past Tuesday.

On Monday afternoon Omar sent me a message that we needed to drive to Tepatitlán de Morelos. He had an appointment at 2 in the afternoon to submit his application (and to pay the associated fee) for dental school.

I have become accustomed to these last-minute notices. My old northern nature would have peppered him with a volley of questions -- starting with "How long ago did you know about this?" But I have done my best to tamp down those instincts because, in the end, they do not matter. If he had to go, so did I.

My sole concern was that I had scheduled a trip to the mechanic because I had been experiencing some odd handling problems with the SUV. On rough road, it felt as if it was floating from side-to-side. But, when I took my hands off of the steering wheel, it drove straight. And the drive to Tepatitlán would take about 6 hours. One way.

But I put all of that aside. Every father I know wants to spend more time with his son. With our schedules, I often go for days without seeing Omar. The idea of talking and enjoying life with him for a full day completely extinguished any concerns I had about the drive.

He then told me that his girlfriend, Yoana, and her father, Pancho, would be joining us. Yoana was applying to the law school at the same university.

That was fine. I knew both of them very well. But it would mean that my Spanish skills would be put to a test. As it turns out, having Pancho along was a God-send.

Omar wanted to leave at 5. I suggested we had plenty of time if we left at 8. We settled on 6, and, after picking up Pancho and Yoana, we were on our way.

For the first hour, we chatted and laughed -- completely enjoying the drive in the early morning. Until about a half hour past Manzanillo. We all heard an ominous thumping from the right rear tire well. A thumping that soon crescendoed into a flapping.

I stopped. The source of the noise was immediately obvious. One side of the tire was disintegrating.

I pulled out the spare, the jack, and the lug wrench for a little road-side surgery. But I could not find the lug lock anywhere.

I knew where it was. The service department at Manzanillo Ford had twice failed to return it to me after my car was serviced. Apparently, they had failed a third time on my last visit.

Just like the Bakersfield trip, we were lucky enough to be within two blocks of a small tire shop, where I quickly learned the uselessness of locking lug nuts. The mechanic broke off the lock within five minutes. 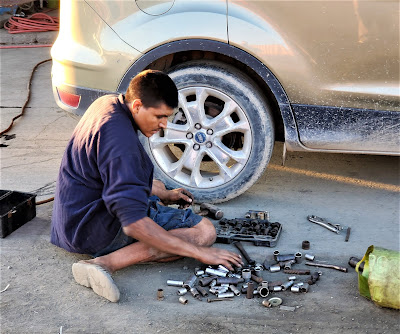 A quick look at my car from the rear disclosed what I should have seen earlier. Something was amiss with the rear suspension. Both rear tires were as pigeon-toed as a Jerry Lewis character. The tread was almost entirely missing from the inside of both rear tires.

I did a quick calculation. We would not have enough time to buy a new set of rear tires and get Omar and Yoana to the admission office on time. And the mechanic did not have an old tire that would fit my rim.  My plan was to stop in Guadalajara on our way back to Barra de Navidad in the afternoon.

The effect, of course, was similar to a general using up all of his reserves in the opening minutes of battle. That is exactly when the commies hit you from the left flank -- and you have no reserves with which to respond.

So, off we shot again. About three hours later, we were on the new ring road that skirts Guadalajara to the south. The road cuts off at least an hour of travel time on trips that used to require driving through the city.

Omar had just told me the name of the lake north of us (Cajititlán -- a name I can never remember) when we heard a loud pop. Not so much a pistol shot as the sound of a cork leaving the neck of an indifferent Champagne).

Of course, it was the left rear tire. I was in the left lane with a truck on my right when it blew. I slowed and drove to the shoulder.

I had just told Pancho of the complete lack of exits and services on that stretch of road. And services we now needed.

Under normal circumstances, I would have replaced the flat with the right tire we had earlier removed. But that was not possible. We still had the lost key problem. 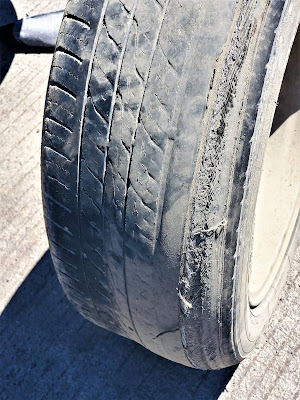 He called a taxi. They would not come. Pancho called a series of tire repair shops. Unsurprisingly, they would (or could) not come to us. We had to go to them.

Pancho suggested that we slowly drive on the flat to the nearest service spot. Against every bit of advice I have heard from my father and brother, I drove on the flat at 20 kph for 28 kilometers.

We stopped at a tiny tire repair shop at the Chapala toll booth. The mechanic broke off the lug lock in 30 seconds, put the dying tire on the left, and we were off to find a someone who could sell us an old tire -- armed only with the type of directions that never quite get you where you need to go.

But we found a shop that had a serviceable tire that would fit, and we were ready to head off -- having lost three hours of driving time. We made it to Tepatitlán in good time. And then the drive had to add one last jest.

On Monday, I told Omar that I would not make the drive unless he gave me an actual street address to put in Google Maps. I have been on several trips with Mexican friends where our destination is somewhat chimeral, and we end up wandering through strange towns with no idea where we are or where we are going.

He could not get an address, but he entered the name of the University of Guadalajara branch. I thought that would be good enough. It wasn't. It took us to a four-way stop with nary a building in sight.

So, we starting putting new words into the search function. After wandering around the city aimlessly for a half-hour or so, Omar managed to get a destination in Google Maps that actually took us directly to the campus.

And a nice campus it is. While Omar and Yoana spent about five minutes submitting their applications, Pancho and I took a quick look around the place. It is a long way from home, but I think Omar and Yoana may enjoy going to school there. 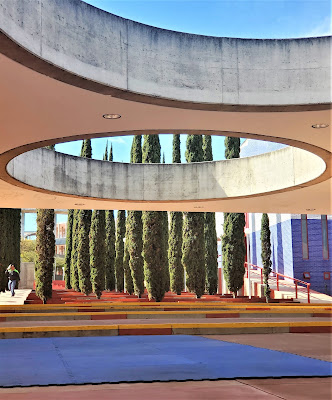 We then piled back into the car and had lunch in a serviceable Italian restaurant before we jumped back onto the toll roads home. 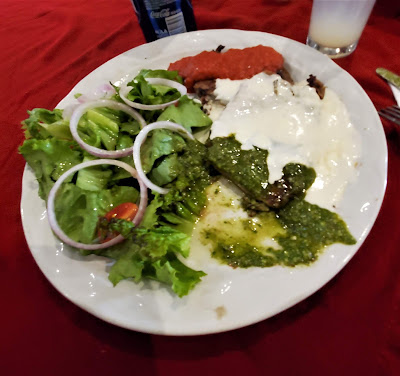 The drive back was anti-climatic. We had lost too much time to stop in Guadalajara for tires. But I could buy them in Melaque or Manzanillo -- as well as getting the suspension repaired.

The only interesting layer to our adventure on the way back was the Google Maps voice in my telephone. I have long called her Carlota. When she was mis-directing me in Tepatitlán, I must have hurt her feelings -- or drove her into eponymous madness.

I knew exactly how to get home, but, for fun, I filed a flight plan with Google. Even though we were on a straight toll road, she would erratically blurt out irrelevant directions. "Turn right." "Head north." "Make a sharp right turn." It was almost as if she had recently contracted a severe case of Tourette's.

But she did not deter our return home after a fascinating day. We pulled into Barra de Navidad around 10 PM. It was sixteen hours of adventure and bonding. The kind of event that builds bonds and character.

And now you can see why, during Tuesday's drive, I thought of my trip to Los Angeles with Stan Ackroyd. If my Scottish genes hold up, fifty years from now, I will be telling both tales as a double feature at dinner parties.