i am not an expatriate 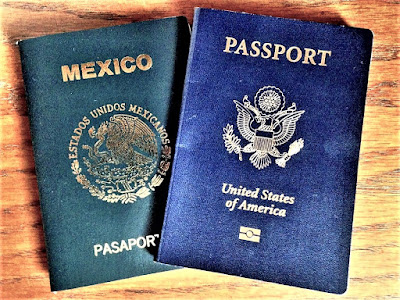 Despite the name of this blog, I am not an expatriate.

Well, I am. But, more accurately, I am an immigrant. And the distinction is important.

Expatriates leave their home countries (often for extended periods), but they always intend to return home. Think of Gertrude Stein, who eventually decided there was no "there" in Paris, either.

Immigrants also leave their home countries. But they are not expatriate commuters. They have a one way ticket to their New World. And when they get there, they intend to stay.

My relatives who fled England in 1620 had no intention of ever seeing England's rainy shores again. Instead, they traded them for the snowy shores of Plymouth colony. To immigrants, expatriates are just long-term tourists.

When I left Oregon in 2009, I was not turning my back on The United States, but I certainly had no intention of ever living north of the Rio Bravo again. My new home was Mexico, and I settled in as best as I could.

I am now in my thirteenth year of living in Mexico as an immigrant. I have gone from temporary resident status to permanent resident status. Now and then, I think of taking the next step -- citizenship. And I am thinking about it once again.

My latest thought exercise was triggered by an article in the 3 April edition of The Mexico News Daily:"Cubans, soccer players and Yanks: citizenship’s lure draws a varied mix." The article was written by Leigh Thelmadatter, a regular contributor to the newspaper and the administrator of Blogging Mexico, a Facebook group where Mexpatriate frequently appears.

Leigh's article contains some interesting facts. Even though Mexico is home to many foreigners, only just over 40,000 took the steps to become naturalized citizens during the dozen years between 2007 and 2019. Of those, most were from other Latin American countries. That makes sense because speaking Spanish is a necessary step in the process.

Of the 40,000 naturalizations, only 2,000 were from The United States -- including my late friend, Ed Gilliam. That low number probably reflects a lot of considerations, the first being that most Americans here seem to see themselves as expatriates. No matter how much they enjoy the pleasures of Mexican life, their allegiances and loyalties remain north of the border as evidenced by their obsessive political arguments. When health and age take their toll, many decamp to The Old Country (as Jennifer Rose would have it).

There is another group that is reluctant to make the trek to citizenship, and I count myself in that group. Permanent residence gives most of us what we need. A certain sense of stability. The ability to do almost everything a citizen can do. And all of that without having to undergo the fraternity hazing process that all nations require their naturalized citizen applicants to endure.

Assuming you are not a foreign football star, or the spouse of a Mexican, or the direct descendant of Pancho Villa, or a winner of the Nobel Prize in Chemistry, you will have to win citizenship the old-fashioned way by passing, in the words of the Government of Mexico website, "the examination of history and culture of Mexico and . . . the examination of understanding of the Spanish language."

The Spanish language comprehension examination has changed in the years I have considered applying for citizenship. In the past, an applicant merely had to demonstrate an ability to speak Spanish that satisfied the official accepting the application. The test now consists of a 10-minute test of comprehension of reading and writing. The applicant must correctly answer 5 of 6 questions.

That is what the website says. An acquaintance who took the test last year in Colima told me she was shown a series of pictures and was required to write a two-paragraph story about each one. She was not aware of the current requirement.

Whenever I have considered applying for citizenship, I have looked forward to the Mexican history test, After all, it was one of my minors in college, and I regularly lecture on the topic. In the past, I aced all of the practice examinations online. Back then, because of my age, I would not have been required to take it. And that disappointed me.

Things have changed. I no longer see the Old Geezer waiver, and the test itself has become far more difficult. It is now a Mexican history and culture examination -- ten questions with a requirement to answer 8 of the questions correctly.

On the practice test, I once again aced all of the history questions. But, because I had absolutely no idea who Timbiriche, Javier Solis, and Carlos Almaraz were, I would have failed the requirement.

I accompanied my friend Ed, and his wife Roxane, on his several journeys to Colima when he was seeking citizenship. The two examinations are just the start of the endurance test. Apostilled documents are required from The Old Country. Both the Mexican federal government and the Jalisco government must issue statements that the applicant is not a criminal. That means trips to Mexico City and (for those of us on the Costalegre) El Grullo.

And what does all of that get a person when everything is done? Citizen, sure. But what does that mean?

There are two big benefits that citizenship provides.

The first is the ability to participate in the Mexican political process without violating Article 9 of the Mexican Constitution. And the right to vote for the people who make the laws that control my life in Mexico. To me, that is important.

The second is just as important. I would no longer need a bank trust to claim an ownership right in my house here in the Restricted Zone (another of term that sounds as if borrowed from Star Trek). With citizenship I could revel in the bliss of fee simple ownership.

Even though those two tangible benefits are attractive, it is the spiritual aspect of citizenship that draws me back to the idea. I would no longer be just an immigrant. I would be a citizen of the country in which I have chosen to live.

So, what keeps stopping me from bearing the ring to Mount Doom? A lot of it has to do with the sheer bureaucracy of the process. I am settled into a nice existence now where I seldom need to deal with the vagaries of government. I call it The Inertia Effect.

But there are two other practical considerations.

The first is taxes. I have talked with three accountants to determine the effect that citizenship would have on my tax situation. And I received three different answers -- one too cynical to repeat.

The second involves the Mexican prohibition of other-national titles and the requirement that naturalized citizens owe their full allegiance to Mexico (at least while in the country). I hold at least two titles that would make those requirements at least problematic -- if not impossible. The corollary to the requirement is that if I become a Mexican citizen, the American consulate system would treat me as just that -- a Mexican citizen. I have never used the services of the consulate, but you just never know. Come the Revolution, all ports would be welcome.

Whenever I get to this point in thinking about citizenship, I start weighing the benefits against the rigorous procedures to get from here to there. What I need to do is to get some definitive answers on the questions of titles and taxes. Then, I can decide whether this immigrant will become a citizen.

I am certain we will be chatting with one another on this topic in the near future.