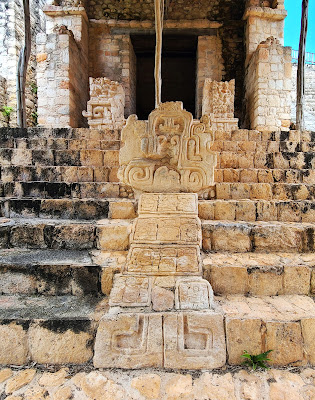 I came to archaeology late in life.

That is not entirely accurate. I came to Mexican archaeology late in life. And I am not certain why.

In the 1960s, I was an avid reader of Francis Murphy's "Behind the Mike" column in The Oregonian. Murphy was the television and radio critic for the newspaper.

I found his column interesting not because it was about television (a medium I have never found appealing) but because he was a craftsman at writing. Each summer he would head off to the Yucatán peninsula to participate in newly-uncovered Maya city-states. To me, he was a cross between Tarzan and Jungle Jim. Because of his writing, my undergraduate history degree centered around Mexico.

But not Mexican archaeology. Not yet. I came to the Maya through a back door.

When I was stationed in Greece, I was surrounded by several archaeological sites -- including Olympia, Sparta, and Mycenae. During my year on the Peloponnese, I put my hand to trowel in a couple of digs. It never became more than a hobby. But it is one of my passions. And Mexico has turned out to be a great place to salve that itch. Especially, the Yucatán peninsula.

Mesoamerica was filled with sophisticated cultures. Especially, the Maya.

Unlike the Aztec, the Maya never formed an empire. If the Aztecs were imperial Romans, the Maya were ancient Greeks.

The Maya politically organized their civilization into city-states, some of whom had greater influence over their neighbors, on the peninsula and in what we now know as Belize and Guatemala. Even though the city-states were never joined into a centralized empire, the Maya civilization shared common trade practices and religion, as well as developing sophisticated systems of writing, counting, and calculating the passage of time through an advanced knowledge of astronomy.

There are three types of archaeologists: those who divide Mesoamerican civilizations into three stages of development and those who don't. Let's pretend we are in the first group, if for no other reason than the Maya had a very long history of maintaining their civilization. Almost 4000 years:

On my prior three visits to the peninsula, I visited the great classical cities of Uxmal (looking into chac's eyes), Chichen Itza, and several of their smaller allies, as well as the postclassic ruins at Tulum that was still an operating city when the Spanish arrived. On this trip, we decided to restrict our Maya exploration to two cities: Ekʼ Balam on the eastern side of the peninsula just north of Valladolid, and Mayapan just south of Mérida in the west.

Ekʼ Balam is fascinating because of its long history. It spanned all three historical periods, starting as a preclassic settlement that grew into a thriving classic city-state dominating the surrounding cities about the time the  western calendar switched from BC to AD-saving time. And just like the other classic cities, it was abruptly abandoned, though a remnant of the population stayed in the city until it was completely abandoned before the Spanish arrived.

Even though it is not as large as the grander sites, Ekʼ Balam has all of the elements of a great city-state. 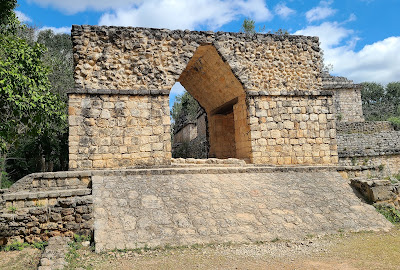 A temple with an unusual oval construction -- showing an individual style within a common architectural heritage. Its geographic position indicates it also served as some form of cosmological purpose. Perhaps to calculate rainy seasons. 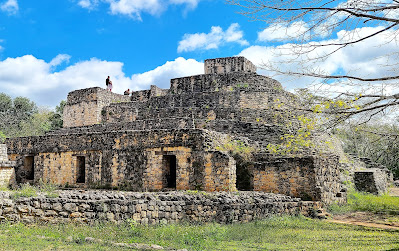 No civilization is ever complete without a sports arena. This one is for the traditional Mesoamerican ballgame. Only a handful of Maya city-states lack them. Such as, the grand Palenque.

The largest and most magnificent of the buildings at Ekʼ Balam is the Acropolis. A temple that contained the mortal remains of one of the city's most famous rulers -- Ukit Kan Leʼk Tok. His tomb is under the palapa on the upper left -- the one that looks like a Kon Tiki bar in Seattle.

Compared with Ekʼ Balam, Mayapan is nouveau arrive. The city was not built until the postclassic period. Somewhere in the 1220s. But it was important as the capital of the Maya in the Yucatán peninsula (with over 4000 structures and an estimated population of almost 20,000) until it was almost entirely abandoned around 1461 -- just before the arrival of the Spanish.

Like many civilizations, when they head into decline, construction techniques suffer. That is certainly true of Mayapan. Many of the buildings collapsed soon after the city was abandoned -- as opposed to most of the classic period buildings that survived even when covered by jungle. 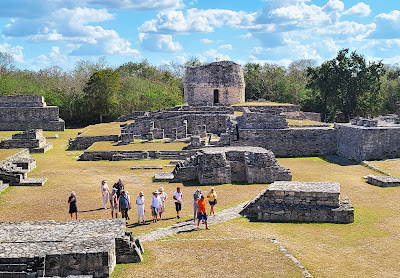 But there is a visual clue that Mayapan attempted to be the successor of Chichén Itzá. If this temple looks familiar, it should. It is an inferior copy of the much-visited Temple of Kukulkan. 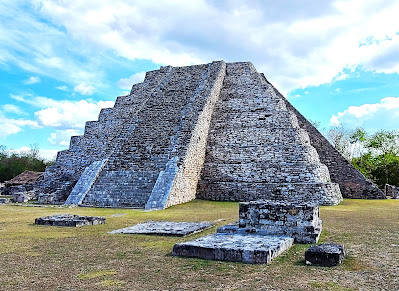 It is what Chichen Itza would have built as a replica if it had a budget of only $100.

There are plenty of theories. Interestingly, the theories tend to reflect disasters that the theory-propounders are suffering themselves. The list is the usual list of suspects.

The point is that no one really knows. There are plenty of clues, but like any good mystery, they contradict one another and lead to no conclusion.

And it is just that type of mystery that keeps drawing me back to the heartland of the Maya civilization. Each trip I have taken, I have learned more.

What is not a mystery is that the Maya will welcome you to a land that celebrates their past -- and their present.