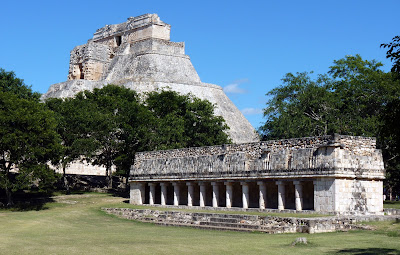 
She was a woman of a certain age.  Prematurely black hair tumbling over the neck of her turquoise and white caftan.  Accessorized with enough silver and stone necklaces, rings, and bracelets to make a carnival crystal ball reader blush.


Her tour group huddled in front of her.  Peeking through half-closed eyes at the immense pyramid in front of them.


"Feel the waves of the power of the god Chac wash over you from his home.  Feel his loving power."


I almost turned in my crystal.


We were in Uxmal -- one of the major Mayan sites.


Most of the Yucatán is flat.  So flat that some of my blogger pals in Mérida joke about driving out to an overpass to get a mountain experience.


Uxmal is not flat.  It is on the edge of Mayan hill country.  And it takes full advantage of its position.


Approaching Uxmal from the north, I almost confused it with a resort hotel.  It appears that immense -- even from a distance. 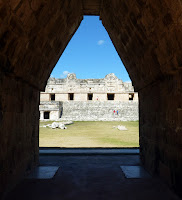 Uxmal is exactly what tourists expect to see in a Mayan ruin.  The place is huge.  And it requires little imagination.  As if a theme park designer had taken all the tough stuff out of getting The Experience.


At its height in the late Classic period (850-925 AD) (Now, I warned you we were going to be using those few facts we learned two posts ago.), Uxmal dominated the region around it.  It was the Chicago of the hill country.  A massive administrative and f religious center that allowed the city elite to control the local rural folk.


Much of the city was still visible (and lightly inhabited) when the Spanish arrived in the mid-1500s.  Most of the population had dispersed around 1000 AD.  But the buildings were so well constructed from cut stone, they had not seriously deteriorated.


The Spanish immediately went about slapping fanciful names on the structures.  The Magician's Pyramid.  The Nunnery.  The Governor's House.  Not knowing the purpose of any of the buildings.


The grand round-sided Magician's Pyramid is the focal point of the sight.  The name is understandable.  It looks as if Saruman could walk out of the mouth of the god Chac near the top of the pyramid.


The pyramid is the stuff of legend.  Literally.  A less skeptical world believed a magician dwarf (probably related to the mummies at Santa Elena) built the place in one night.  Anyone living in Mexico knows that would not be merely magic; it would be a miracle.


Less-imaginative scientists tell us the pyramid was built between 500 and 900 AD in five separate stages.  One temple building on top of the next.  Something of a deity condo.


The fourth temple can be seen near the top of the pyramid.  Its facade is the face of Chac (the rain god) -- complete with froggy eyes, a Simon Legree mustache, and a gaping mouth entrance lined with teeth.  All the better to eat you, I suppose.


The structure must have been quite a sight in its prime.  Painted red with details in yellow, blue, and black.  Now, it is merely naked ivory-hued limestone.


But Uxmal is much more than a Wagnerian opera set for human sacrifice.


The complex has two more major pyramids, additional temples, palaces, a ball court, and administrative buildings.  All of them designed to show that Uxmal was a place of refined power.  But power, nonetheless. 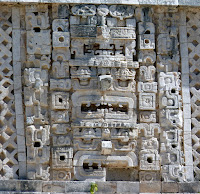 The Mayans developed an interesting style for their stone buildings.  The facades are essentially giant mosaics of gods and animals -- and geometric shapes.  And they are some of the most beautiful sculptures I have seen.


While Europe was stuck in an era of representational art, the Mayans were developing a cross between cubism and expressionism.  To great effect.  And that form reached an artistic height on the walls of Uxmal.


The complex has enough layers of interest that a multiple-day stop would not be excessive.  I could have spent a full day cataloging the intricate designs on the walls of the Nunnery.  I may want to schedule a return visit to do just that. 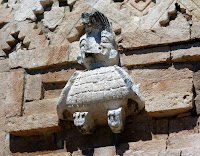 If I return, though, it will not be for the iconic Magician's Pyramid.  The Power Buildings hold little interest for me.  They are a bit too Neuschwanstein.  But I find the smaller buildings fascinating -- where some of the City People lived their lives.


The bejeweled tour guide can have her Chac talk.


Give me the people -- and how they lived.

Your essay/description is bringing it all back to me. I knew these "talks" were going to be good.
Nita

I love the photos and the history lessons. Thank you.

Steve,
It was not the Greeks or the Romans, but the Mayans that "invented" the concept of zero, the absence of value, and why we have calculus today.
Saludos,
Francisco

I also love places where I can imagine people living, loving, raising children, dying. It is more intense when you can really imagine life going on as usual in such an impressive place. You should go to Palenque Steve, there you can even see the toilets, the cooking patios, the sleeping rooms of family compounds. Can I also recommend Calakmul if we are staying in Mexico. It's a huge and incredible site, largely un "remodeled". I think you will have to return to the south, there is so much more to see.

I have never been to Itza. After Uxmal, I would still like to see it sometime, but there is no urgency behind that.

I do want to spend more time at Uxmal. Probably spend a night at the hotel there. Uxmal was spectacular

I have some photos near the bottom of this album

Steve,
These essays are absolutely amazing. So much information in such an enjoyable manner. I hope you put all your work together some day into a book.
You are a friend, teacher and have such a talent to be able to take us with you on your journey. Thank you! I can't wait until I see all of this myself. I am not commenting on every blog but please know I am very happy to have found you.
P.S. Portland is freezing....Marilyn

Hi Steve,
Great to meet you at the bloggers' conference, and to discover your erudite and entertaining stories. It's on my list of must-reads. cheers, Debbie

According to the book The History of Zero (published about 15 years ago I think) the concept was first developed in Babylonia several centuries BC. It was rejected by the Greeks as it couldn't be made to fit into their thinking. The idea of null, nothing, void was completely unacceptable and in fact impossible. In the 4th century BC it traveled to India with Alexander the G where it was embraced. The early Romans/ Christians had major problems with it also, until it became too useful to ignore.

It sounds silly to us because we grow up with zero in everyday use. If you want to try to understand why it was so foreign to the ancients, spend some time trying to wrap your mind around the idea of three or four or n-dimensional infinity.

Mayans very rich history including a lot of science as Francisco points out. I am taking notes for a visit.

Nita -- Happy to share the memories with you. It would be real easy to spend a lot of time at some of these sites.

Jackie -- You are most welcome. And thank you for reading them.

Francisco -- If I remember correctly, zero was one of those discoveries made independent of several civilizations. But the Mayans certainly were the discoverers in the New World.

Jonna -- You are correct. I need to make a return trip to see some of the southern sites. And to find the people in all the hubbub of the big cities.


Ron -- I would choose Uxmal over Chichen Itza any time. But I prefer the smaller sites. See tomorrow's post.

Marikyn -- Funny that you mention the concept of a book. Gary Denness over at Mexile has done just that with some of his posts. I am going to think about it.

Debbie -- I am glad to have met you at the conference. Thank you for the very kind comments. Keep on reading -- and commenting. I will be interested in seeing the house if I ever get back over your way.

Anonymous (and why be anonymous with such good information?) -- Who was first is not as amazing to me as the manner in which the Mayans were not able only to independently develop their astronomical and mathematical skills, but that zero was part of that development. Thanks for adding to the discussion. Write more often. With a name -- even an alias?

Calypso -- I assume you are still planning on getting over to that part of the world -- even if you are not going to open up your city place in the Paris of Mexico.

"Prematurely black hair"? That almost distracted me from the rest of the post. Your descriptions are as good as being there. Thanks for taking the time to share.

Irene -- Glad you liked it. I took a shining to that phrase, as well.

How very blue collar of you.

But this is a fascinating series.