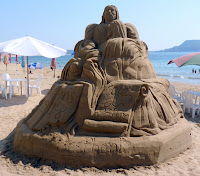 I am suffering from a mild case of Stendhal syndrome


The syndrome was first applied to tourists overwhelmed by the art of Florence.  Too much aesthetic stimulation in too little time.


My bout comes from our Festival del Mar.  And for the same reason.  Too much of a good thing.


At the start of the festival, I showed you a sand sculpture in its first phase.  It is now complete.  And so is the festival.


Sunday night was the grand finale.  And grand it was.

The jardin was packed, at 9 on a Sunday night, with people of all ages.  Mainly Mexicans.  But a few pasty expatriate faces floated in the crowd.


A local band, Angel de Fuego, quickly had the place jumping and dancing.  Literally.  (And I do not mean that in a Joe Biden sense.  I mean "literally.)


The beat was so strong that people could not help themselves.  Including me.
For most of the festival I had perched myself on a raised palm planter.  It was a great angle for photographs.  Even though it was a lousy dance floor, I started dancing with two of the women I had talked with earlier in the evening.


First my feet.  Then my legs.  Then my butt.  I may as well have been dancing for tips in a bar.

But that moment summed up the week's activities.  It was just plain fun.  There were intellectual moments, but it was about the good times rolling.  The Greeks had it wrong.  Excess can be far more satisfying than moderation. 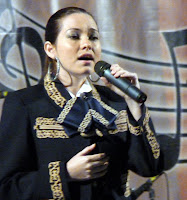 The other star vwas a young ranchera singer.  I wish I knew her name.  But I don't.


She was incredibly good.  And it was not just her technique -- which was flawless.  Even though I could not understand all of the lyrics, her singing filled my soul.

I do not know what the planning committee set out to achieve.  So, I have no idea if they met their goals during the festival.


I do know I had a great time.  And I am looking forward to next year's version.


And here is your invitation.  Come on over.


If you contract Stendhal syndrome, I know a nice little beach where you can recover.

So does this mean that you plan of still living there this time next year?

The more I read your blog, the more homesickness I get =(

Hopefully, I will be there next year!

Totally off-topic. Some time ago you were looking for information on the Irish in Mexico. Just saw where somebody mentioned the book "The Irish Soldiers of Mexico" is available for the Kindle.

So, if I understand your invitation correctly, I can come live with you next year and enjoy all the comforts of Mexico from your pad, right? Do I need to bring a toothbrush?

If their goal was for people to enjoy themselves, it sounds like it was met.

I am wondering the same as Islagringo - give us the scoop.

Islagringo -- Who can say? I have given up on trying to plan.

Larry -- Thanks. I am not certain comments are ever out of context. I will take a look at the book. I am still hitting dead ends down here.

ANM -- No. It will be a metaphysical visit.

Brenda -- I think that was it. But I have no idea what kind of uptick in business activity they were expecting. There was no admission fee for the events.

Calypso -- The scoop is only that there is no scoop. From here on out, I am improvising.

The majority of the events put on by the city here are free so that everyone can attend without fear of cost. For some people the cost of the bus to get to centro is enough of a cost. From what I can see they are for the peoples enjoyment. I suppose the more free events put on by the city government, the less people may complain about other things????
The toy sellers, street venders, etc., make good money during these events which in turn gets recycled into the corner stores, grocery stores, etc.. Win, win situation for all in the end. What goes around comes around.