it's not chicken pizza! 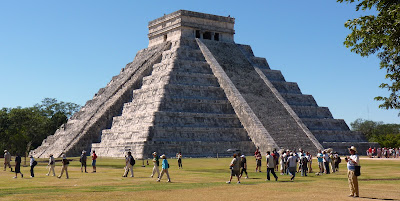 Eighth wonder of the world.

One of the New Seven Wonders of the World.

Islagringo had saved Chichén Itzá as the last Mayan ruin on our road trip.  Those titles tell you why.  The place is one of Mexico's archaeological stars.  The second most visited ancient site in the country.*


Chichén Itzá is a success story of Mexican tourism.


When the Spanish arrived, the place was generally in disuse -- even though battles were fought amongst its buildings.  But in the late 1500s it began life in a new form -- as a cattle ranch.


And so things remained for three centuries.  Until the arrival of one of those figures who ends up wearing hero white and villain black -- depending on who is in political control.  In 1894 the American consul to Yucatán, Edward Thompson, purchased Hacienda Chichén -- with all of the ruins included.


Knots of tourists had been visiting the site for a century.  Thompson, a true Massachusetts Yankee and lover of all things Mayan, thought he knew how to turn a peso.  In 1910, he announced plans to build a tourist hotel on his property -- just in time for the Mexican Revolution.


While Mexicans were shooting one another, tourism took a vacation.  As did Thompson from the Yucatán with government agents in pursuit.


The construction of a road to Chichén Itzá and a steamship pier at Progreso were the next steps to cajole tourists to the site.  In the first year, seven steamship passengers took advantage of this brave new world of tourism.  But they were the trail breakers for the thousands of cruise ship passengers who would visit the site 80 years later.


In 1972 the Mexican government passed a law declaring all pre-Columbian monuments federal property.  But the land under the Chichén Itzá monuments was privately-owned.  That did not change until this year when Yucatán bought the land.  As we saw on Sunday, though, the land at most other sites is still in private hands.


The visitor numbers grew from a few hundred each year in the 70s to several thousand a year in the 80s.  The visitor level is now up to thousands each day in the high season.


We know a lot about Chichén Itzá as a tourist site, but we know little of its social history.  The city existed in the early Classical period, but it thrived in the terminal Classical period when it became a regional capital.  Almost the New York City of northern Mayan holdings.  Just as the southern Mayan cities were collapsing.


No one knows why.  A prominent anthropological myth is that a Toltec king set up shop (with his military thugs) in Chichén Itzá after being exiled from central Mexico.  The proof?  A mixture of Toltec and Mayan styles at Chichén Itzá.  The problem with the myth is that the buildings were in place before the "king across the water" scenario could play itself out.


There was a brief time in the 1990s when some anthropologists decided Chichén Itzá must have been some sort of hippie paradise.  A giant anarcho-syndicalist commune.  But that myth soon died along with the pacific Mayan nonsense.


I won't even mention Edward Thompson's theory that the Maya were actually a remnant of Atlantis.  But i guess I just did.


We may not know how the Chichén Itzá Mayans lived or how they ruled.  But we can still see where they led their civic lives.


Chichén Itzá was the first stop on our road trip where we encountered tourist hordes.  Huge, camera-toting, herd-instinct hordes.


Getting through the entry area was every bit as difficult as navigating Los Angeles airport. 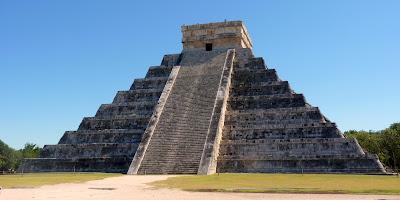 But the first sight of El Castillo (the castle) was worth it.  The temple pyramid is the poster child of Mexican tourism.  It is more properly known as the Temple of Kukulkán -- or, as I called it, Kukulkán and Ollie.


To say it is 79 feet tall does not do it justice.  It has Presence.  A massive step pyramid topped with a temple and accessorized with enough serpent parts to qualify as Vincent Price Manor.

It dominates all of Chichén Itzá.  And it was meant to do just that.


This is where the Mayans worshiped their plumed serpent god.  And stood in awe, at each equinox, as the sun's shadow played across a staircase on the pyramid.  Giving the eerie impression of a serpent slithering down the stairs to join with its stone head at the bottom.


Thousands of New Age (and, undoubtedly, some Old Age) believers show up each year to stand slack-jawed watching the equivalent of a shadow puppet show.


But Chichén Itzá is far more than a serpent-worshiping pyramid.  For the academic-minded, there is an astronomical observatory.  For sports fans, the largest ball court in ancient Mesoamerica.  For architecture buffs, a Temple of Warriors that has a Toltec sibling at Tula. 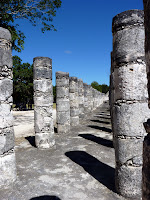 And lots and lots of columns once topped with a roof -- and no one knows why it is there.  Looking a lot like a lost Greek stoa.


The columns add an interesting architectural counterpoint to the more monumental buildings.  Just as they do in Greek architecture.  They are the tissue that hold the bones together.


Considering some of the odd bones they complement, their very ordinariness is -- well, extraordinary.


One of my favorite structures at Chichén Itzá is the Tzompantli.  A long, flat platform with an interesting motif repetition.  Skulls.  More skulls than a decade of Day of the dead celebrations could produce.

That platform is perfect evidence to send the pacific Mayan myth off to the guillotine.  It was used to display the severed heads of rebels, traitors, and enemies.  And to remind any wannabes that there was a special place in their future.  Not unlike the bridges of London -- not so long ago.


But I ended up spending most of my stay at Chichén Itzá at the Cenote Sagrado (Sacred Cenote).


As I mentioned earlier, water is a rare commodity in Yucatán.  The peninsula is made up of limestone.  Surface water immediately percolates down to the aquifer.  But some ends up captured in caves -- often open to the surface.  And thus are cenotes born.

In the case of the Sacred Cenote at Chichén Itzá, the pool is exposed.  For centuries the Maya came to the spot where they thought their rain god Chac lived.  They threw in sacred items -- along with the odd sacrificed human -- to appease their moody deity.  A bit of pre-Columbian trash also made its way into the pool.


And, of course, as was the custom of the time, the detritus of the pool was packed up and shipped to the United States.  After all, Thompson owned the property.  A fact the Mexican government would challenge during the Revolution.  Thompson never saw his vindication in court in the 40s -- having died a decade before.


I looked into the pool for a long time.  It is not really beautiful.  I have seen more aesthetic water-filled quarries in Indiana.


But there is something about the place.  A special aura.  As if Mother Nature had left a special cell phone at the spot.  Or would that be the long-nosed Chac?


My reverie was broken by a tour guide's very interesting recitation of pre-Columbian history to an American family.  Father Tourist interrupted to say: "Oh.  I get it.  All these Indians were really Egyptians.  That explains the pyramids."  The guide did not know where to begin.


But I did.  That was my cue to exit stage left before I asked Father Tourist if he ever thought that this could be the Lost Continent of Atlantis.


Chichén Itzá is worth seeing -- once.  But I doubt I will return -- unless a visiting friend wants to go.  With its tidy clearings, massive buildings, and tourist mobs, it is just a little too Disney for me.


No.  Not even Disney.  At least Disney provides rides.


For thousands of years visitors to the Temple of Kukulkán could climb the temple steps and visit the temple chambers.


Not any more.  Four years ago a woman from California fell to her death on the stairs.  The Mexican government decided that was far too close to a reenactment of the pyramid's purpose.  And shut it down.


Now, there aren't even any rides.


A wonder of the world Chichén Itzá may be.  But I will seek my Mayan humanity elsewhere.


* - Because I knew you would ask, the top three, in order of most-visited are: Teotihuacán, Chichén Itzá, and Tulum.  Thanks for asking.

Chicken pizza? Good one. And good article. Side note. Mayans had a start supposedly in Northern Hondurans and we have ruins to prove it. Here in Teguz, no where near that site, a replica of a Mayan temple was built above the city. You can walk up and down it but I can see how easy it would be to tumble down to your death. In case anyone thought it was about worship for modern Hondurans, somone else stuck a replica of the Brazilian Jesus up there, too. And a huge Coca Cola sign. I need to visit there and post. What a mess that park is.

You have done such a great job of telling of our adventure that I hardly feel like I was there. You made it new for me all over again.

Where should we go next?

Islagringo: Calakmul is no longer a mule ride and it is one of the best Mayan ruins. I made it down there in about 8 hours from Merida, it should be about the same from your place. It is an end of the road type place if there ever was one.

"Kukulkán and Ollie" - you have a way with words.

It's definitely a chick book, but The Sacred Well, http://www.thesacredwell.com/, is worth a read for background on the ambassador, Alma Reed and Felipe Carrillo.

Laurie -- It sounds as if you have your own diversification hill.

Islagringo -- It was a practically perfect trip for me. Any ideas for the next one?

Irene -- Glad you liked it. It certainly tickled my fancy.

Jennifer -- Something else for the Kindle. It may be a good balance for my Adam Carolla overdose.