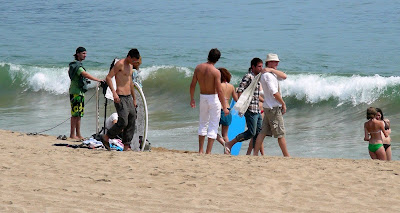 I see some of the darndest things on the beach in front of the house.


Melaque is a Mexican tourist town. Whatever tourists want can be found somewhere on the beach.


But Saturday was a first.


I looked out the window to see surfer dudes with boards. Not unusual. This is a great skim board beach.


But there were fit young women in revealing swimwear. Not a usual sight. The few girls on our beach usually wear a lot of clothing.


And then I saw why. Behind a bank of light reflectors stood two photographers.


It was a model shoot. Young men and women -- and sports equipment.


I never found out what the shoot was all about. But Jiggs tried.


The entire group is staying across the street from the house.


Jiggs, who had been sleeping all day on the shade, heard young voices and was more than willing to abandon old me for young them. He should become a corporate human resources officer.


As we walked by their house, he darted in the gate and started working the table where they were partying. He, of course, became the center of everyone's attention.


Now, there is no living with him. He now claims that he is dating a model.

Excuse me? Scantily clad women? I believe this is definitely a case of anthromorphism. 13 year old dog? Who is the dog fantastizing about new friends. I wonder?

Thanks for brightening a wet, dreary Boston spring morning.

Kim G
Boston, MA
Where scantily-clad models are doubtless as common as in Melaque.

Jiggs claims he is dating a model. That was too funny!
It was a hot one yesterday and iwll be again today on the Willamette Valley. Looking at reaching 85 degrees here today.

Got a new cover for you. If it's not too late, you can spread the rumor that you are a movie producer from the north looking for subjects to star in your next movie.
On second thought......,
Nevermind

An... Ice Tea concession may work. But that sound like too much work also.
Never thought I would hear that there was eye candy in Melaque

Steve,
So was this an language immersion opportunity that Jiggs facilitated?

ahh, how that water makes me yearn for the ocean. i'll be in miami in just under 4 weeks, so i will get my fix.

i remember how in chacala there were very few girls in bathingsuits. most, like you said, wore lots of clothing.

sounds like jiggs is doing better. maybe dating a model will be good for him. after all, isn't he 91 in human years. sly old dog looking at those young models ;-)

have a grreat week steve!

I love that! Jiggs claims that he is dating a model (chuckle).Where do you think that saying "that old dog" came from? Dogs are babe magnets, I am surprised that you didn't know that.
If you really wanted female companionship, being a retired gringo is certainly appealing enough. Come to Merida, I can introduce you to at least five nice unmarried ladies, okay I know more than that many, but my standards for you are high!
regards,
Theresa

And you keep saying he's old :) Good for Jiggs!!

Good for Jiggs lol. Hmmm maybe he is trying to tell you something lol.

I think you will be pleasantly surprised at how many model shoots are done in that area. Last time I was over there they were shooting a "reality" TV show for European models. All the models came in the restaurant and the "old" men I was with turned into gooney teenage boys. They ignored the fact those girls were young enough to be their granddaughters, if not their great granddaughters - it was a metamorphosis that was indeed enjoyable to watch........Go Jiggs........and drag Senor Steve with you......

Way to go Jiggs, I knew you had it in you. Why 13 is youngish and the way you look, hey watch out world, Jiggs is out there.
I'm so happy that Jiggs has now taken to his new and probably final place to spend his life. He probably loves the ocean and sounds like he is doing good. I hope you are too.
::hugs to Mr. Jiggs:: ::smooches to Jiggy too:: You go boy!

Love reading about the new adventures in Mexico! :D I bet it feels so nice to be there finally!

That dog of yours is quite squirrely it seems! ;)

Laurie -- Those kids could easily have been my children or grandchildren. And, my brief converstion would lead me to believe that metaphysics is not their strong suit. But they were very good looking people.

Kim -- They were there again when I returned from church this morning. By the afternoon, they had dispersed like a flock of migrating pea cocks and hens.

Jackie -- I told Jiggs, as he lay on the floor moaning about the heat, that it was just as hot in Salem. Even when I read him your comment, he accused me of making it up. Kids!

Constantino -- I was thinking of posing as a telenovela producer.

Joe S -- Far too shallow for an immersion.

Teresa -- Jiggs is turning out to be the George Burns of the canine set.

Theresa -- Jiggs is the only guy at my place looking to get hooked up. And he would run off with the kids who live down the street.

BoBo's Mom -- When it comes to getting attention, he will always perk up.

Brenda -- And I could probably learn a lot from him. But I listen to him just about as well as he listens to me. I wish you could have met him when we stopped in Guaymas.

Babs -- You should know by now that every man believes he is exactky who he was when he was 18 -- just a lot richer and smarter. And I have doubts about all three.

Gloria -- He really hates the heat, though. Other than meeting models, he spends his time sleeping. But so do I.


Aighmeigh -- I am having a great time. Now that I am settled in, it is everything I anticipated.

You will come across these model shoots in Mexico. We happened on one in Monterrey and as luck would have it, one of the young women left her cell phone on a rock wall where they were posing. I quickly volunteered to take it over to the cafe table where they were now sitting and return it to her. I was rewarded with a "gracias" and a smile from the young lady and a sideways look from my wife...