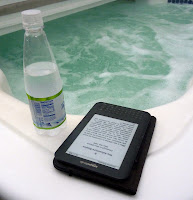 “Everything is ruined by repetition -- even Paris.”


That line from one of my favorite movies drifted through my mind this afternoon as I slipped into the hot tub in the back yard of my Salem house.  With my Kindle, of course.


I have spent the full month of December acting the part of the prodigal son, neighbor, and friend.  Dinners.  Lunches.  Movies.  Parties.  Christmas celebrations.  All of them as a visitor to Oregon.


During the last three years, I have noticed that each place I have lived or visited requires some time to catch the rhythm of that place.  Almost like catching a wave while surfing.  And until you fit into that circle of life, you are merely passing through.  Just an observer.


When I headed to Mexico in 2009, it took me several months to feel comfortable in Melaque.  Of course, I was decompressing from five decades of work.  Getting up each morning to a schedule that was my own, rather than my clients’, was a novelty.  And one I quickly learned to appreciate.


When I returned to work for six months, it took almost as long to see the world as my former colleagues did.  Issues that seemed profound to them struck me as being, at best, trivial.  What I had developed was a jeweler's eye for cant.  An eye that is not highly valued in the professional world.


Getting back into the Melaque cycle took me about a month when I returned to Mexico.  My visit to San Miguel de Allende took about three weeks.  Pátzcuaro a week.


So, I should not be too surprised that I found myself this afternoon feeling as if I had reinserted myself into my former life in Salem.  Well, that is, a retired life in Salem.  Slipping into the hot tub not only felt natural, it felt as if that swirl of hot water was where I was supposed to be.


When I lived in Greece and England in the early 1970s, I never quite fell into the local rhythms.  Probably because my focus was on my eventual return to law school in The States.


I have said several times on these pages that I am not a person of place.  I think that is still accurate.  But I have now learned the joy of simply enjoying where I am and treating it as a temporary home before I wander off to my next rendezvous in this circle of life we inhabit.


And some repetitions -- even Paris -- are worth enduring.  And savoring.

Yup. I have now sunk to Disney clichés.

OK so what movie DID this quote come from?  I seem to remember you having used it in the past stating you did not know where it came from???

Everyone but you seems to know that one can't step into the same hot tub twice.

This one I do know.  It is from Moon Over Parador.  I brought it up on Netflix last night just to be certain I remembered it correctly.

And I am enjoying myself in the moment.

Then, I guess there is no danger of repetition ruining the experience.

Oh and you might also like,
"Impeached: The Trial of President Andrew Johnson and the Fight for Lincoln's Legacy"

I know exactly how you feel and and I agree with  every word.

We are blessed because we have choice.

Even though we have both seemed to choose oddly (as far as weather goes).  I understand the days in Melaque have been great.

I am glad you are feeling comfortable in . . . wherever you choose to be at the moment. More and more, I am at home in Tegucigalpa, but there are still twinges of nostalgia for New Orleans. But who knows? I would love to travel and live elsewhere too. Maybe Cuba one day.

I think I once told you that I would very much like to participate in a mission operation in Cuba.  Maybe one day.

Soon I hope. Another place I would like to discover is Vietnam. I knew many refugees in the NOLA area from Vietnam. I loved their culture, their language, and their restaurants!

Another country I really like. In fact, I almost bought a hotel outside of Saigon in 2001.