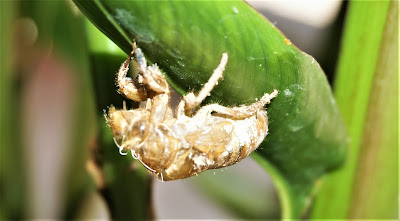 Cicadas were not a part of my youth.

They are uncommon in Oregon. My first encounter with one was on a high school trip to Washington, DC in 1966.

We were staying at a hotel in suburban Virginia when I went outside to watch another new insect -- fireflies. While standing there, I heard a buzz that could have come from a malfunctioning electrical transformer.

When I asked a local resident, he said it was a cicada. That set me off on a research journey that lasts until this day.

Even though I did not see any in Oregon, Mexico is alive with this family of true bugs. The valleys around Colima echo with the plaintive call of males looking for a mate before he drops dead.

And they visit my courtyard -- along with field crickets. I suspect Philip Glass could compose a passable symphony based on the combined nocturnal chirps of the crickets and the buzz of the cicadas.

Because the cicadas have their skeleton on the outside of their bodies, they are forced to molt their skins as they grow new bodies and new wings. The carcasses hanging on my landscape leave a rather melancholy reminder of their presence -- even now when they have all died.

That is the scientific explanation. Colombians have a much more poetic explanation. They believe that cicadas explode when they sing -- like some mythic character out of a Chinese fable. Paying the ultimate price for such beauty.

Now, that sounds a bit strange to those of us whose imaginations have been straight jacketed by The Enlightenment. Aristotle and Dali would tell us there is much more to the world than can be restricted to logic and the scientific method. And, in a certain way, the Colombian explanation is far more romantic than the one I tend to accept.

I suspect Colombians like the tale, but know the truth. Just as Mexicans do about the myth of the eagle, the snake, and the cactus. But each serves its purpose of defining a culture.

Speaking of Colombia, I talked with a reader on the telephone last night. She wondered when I was going to write my long-promised essays on my visit to Colombia.

They are in the works. Now, that I am back at my desk, I will try a bit of discipline in getting them written.

Until then, I will miss the song of the exploding crickets.