We have all done it.

We fly off to somewhere exotic, and, as we are signing into our hotel, we pick up a brochure festooned with photographs of howler monkeys, toucans, and crocodiles. Eco-nature tour, it promises. See the animals in the wild.

Having just watched one of those nature documentaries, we sign up with visions of jaguar stalking capybara. Most often reality does not live up to the hype. At most, we hear howler monkeys howling, see shadows of what was supposed to be a toucan in the jungle canopy, and hear the splash of a crocodile.

Dan, Patty, and I were more fortunate than that on our nature hikes. But we often ended up peering into the underbrush to catch a glimpse of what our guide assured us was a very rare sight.

But we knew where we could find wildlife. At a private nature reserve just outside of Pereira. Ukumari.

The entrance was promising. Tidy and well-designed.

No matter how you try to change the name, even these preserves are a type of zoo. Usually, far more enlightened. And, without them, most people never would see some of these creatures. I try to support the good ones.

The preserve has two parts: animals from Africa and animals that can be found in Colombia.

I have seen enough African animals that I was ready to give that part a miss -- until Patty climbed into this pot. 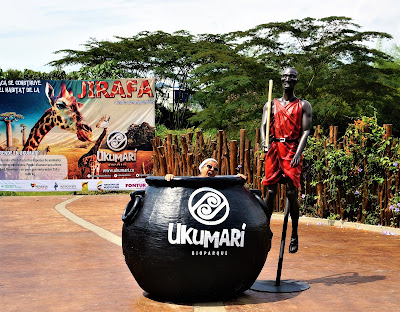 Any zoo brave enough to display this type of humor is worth a look. And I am glad I did.

If we hadn't slipped into the African experience, I would have missed this meerkat that was doing everything it could to coax a snack from us. 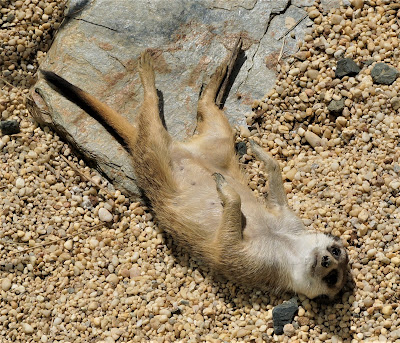 The preserve has three elephants -- all of them rescue animals. One was from a circus. And the 37-year old bull (on the left) was once the prized position of Pablo Escobar, probably the best-known of the cartel bosses.

We then slipped off to the Colombia animals. The preserve's collection is so large, we could have easily spent the rest of our day there. I will share only a sample.

When we were hiking in the wax palm forest, Paula, our guide, did her best to point out a crestless curassow hidden in the branches of a tree. I saw only a shadowy curvature. 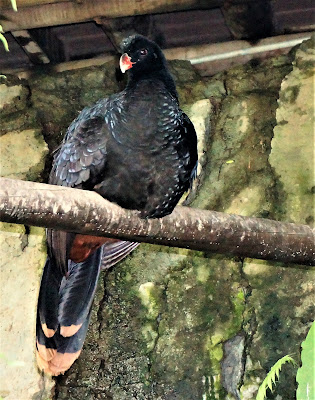 Thanks to the preserve, I had an opportunity to get within touching distance of one in an open aviary.

Along with this small wading bird whose name I do not know. I called him Marty Feldman. 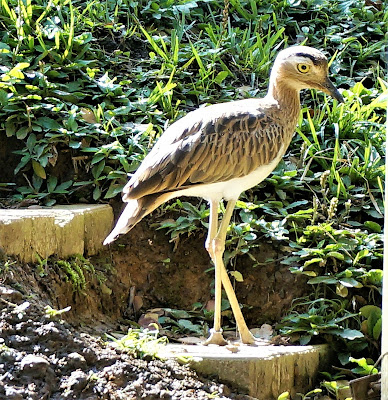 But the most colorful was this scarlet ibis. 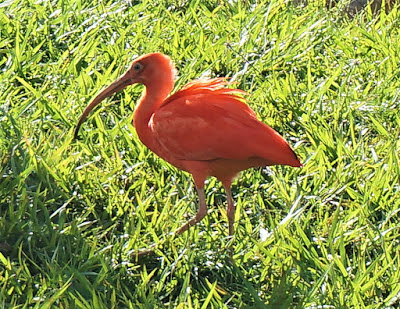 I have not seen the large flocks of flamingos in the Cancun area. For now, I will be satisfied with this small group. They look as if they would be comfortable stuck in a suburban Miami lawn. 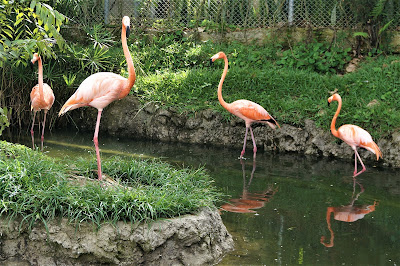 The star of the bird show was this chestnut-mandibled toucan. I have only seen one toucan in the wild. In Veracruz. There were three or four in the aviary -- all of them them willing to strut their beaks. 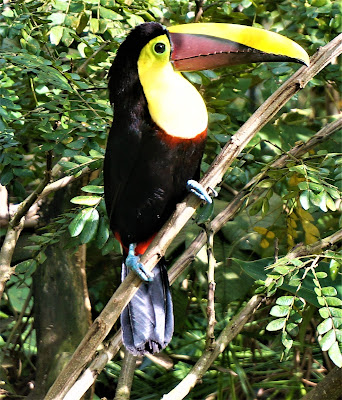 I have long-known that parrots are a jealous lot. This little fellow did his best to attract attention by hiding the toucan sign. 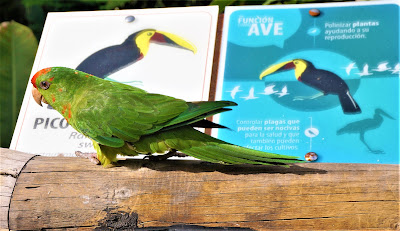 Here he is: posing on his own. 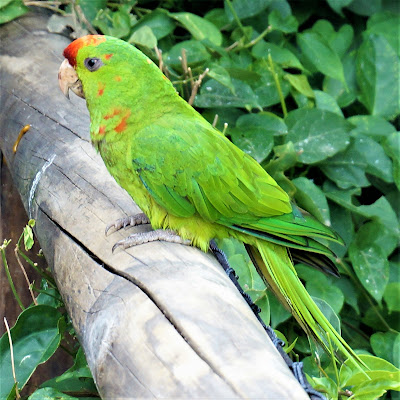 And a fellow parrot waiting at the door to the monkey compound. 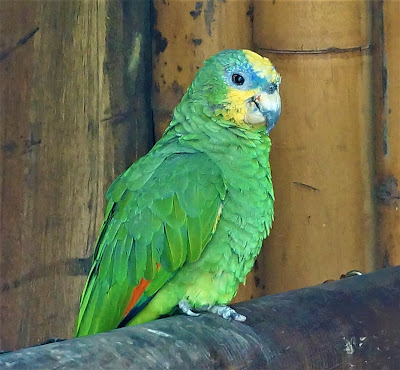 If anyone could compete with the toucan, it was this pair of macaws from the Amazonia region of Colombia. 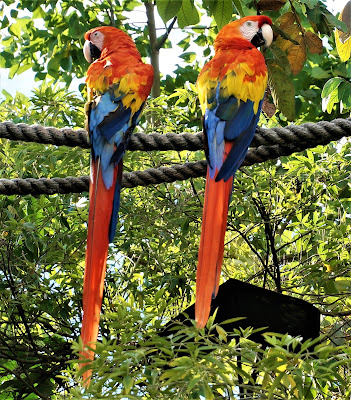 Because Colombia is a land of monkeys, the preserve is populated with several species. Such as this brown capuchin with his mod hairdo. 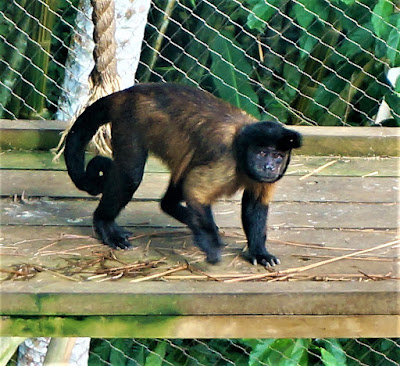 Or this playful white-fronted capuchin. 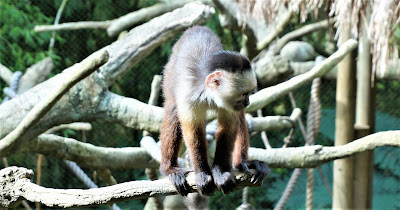 My favorite monkey, though, was this old spider monkey. He was world-weary enough to have seen it all before. Let the young spider monkeys flounce around. He could have been a character out of a Bertolt Brecht play. 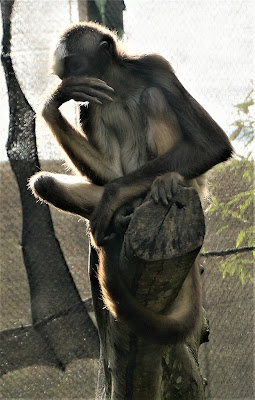 At the other extreme was this river otter -- the compulsive obsessive of the animal world, who could not stop playing.

Preserves may soon be the last place it will be possible to see these white-footed tamarins. They are currently endangered because their forest homes are being cleared of timber. Patty told me they are beloved of most Colombians. Watching them, I could understand why. 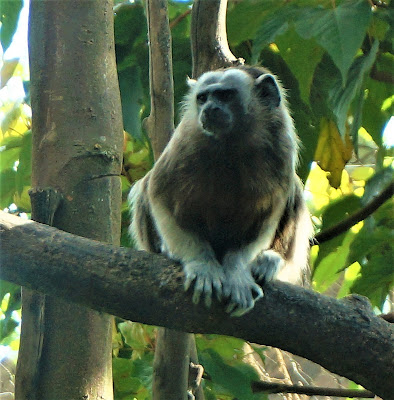 I was going to end this essay here, but I have another experience to share. Mainly in photographs.

One of the primary reasons we visited the Quindio Biological Gardens was to see the butterfly house. Seen from above, there is no guessing what is inside.

There are almost 1600 species of butterflies in Colombia, and we saw a good sampling. I do not know the scientific names of these beauties, and our guide did not intrude with that type of information.

She just let us enjoy the experience. I will give you that same luxury. 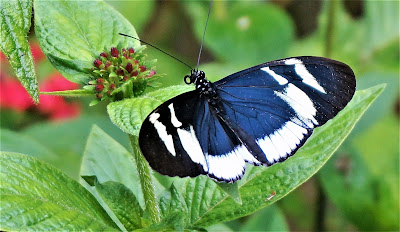 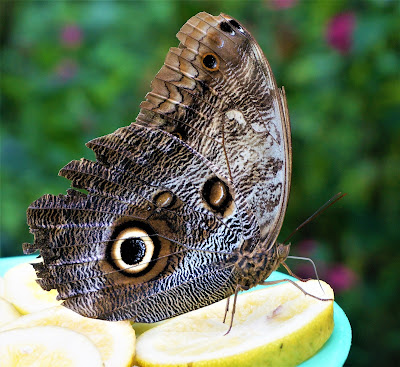 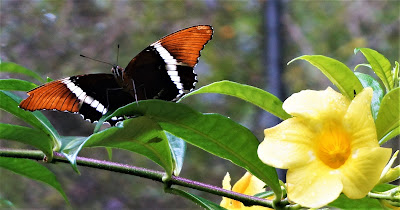 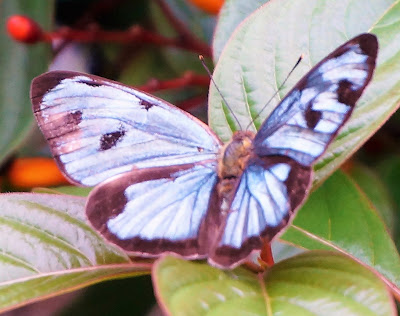 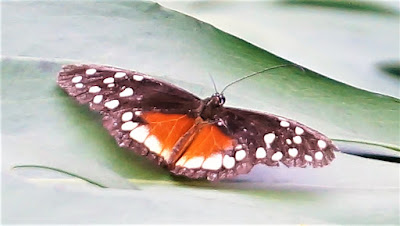 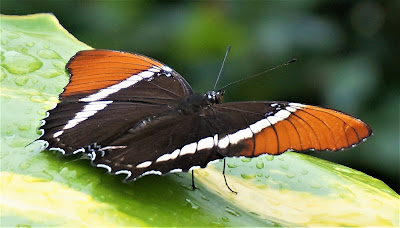 One of the butterflies took a real liking to Dan. She rode on him through most of the tour. 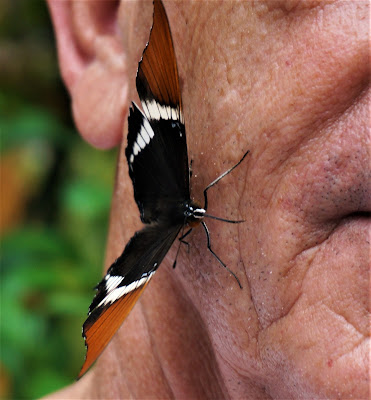 So, there you have the wildlife of Colombia from our brief visit.

After compiling these summary essays, I am ready to return. And I suggest you do the same. Colombia is a memorable experience.
at June 16, 2017