inking up the rice 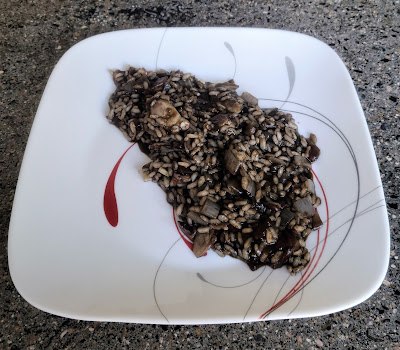 I could not tell you what I like best about Mexico.

But somewhere near the top of the list would be the food.

And I do not mean Mexican cuisine. I find it to be rather pedestrian.* What I enjoy is the availability of food here in Mexico.

I know there are some well-known cooks of Mexican food, like Diana Kennedy, who bemoan the demise of the fresh vegetables she knew when she moved to the country. I have made some of the same observation about my disappointment in local tomatoes.

But just in the baker's dozen of years that I have lived on the Costalegre, the variety of Mexico's food offerings have greatly improved. Stores here now offer almost as much selections as I can find at the Fred Meyer close to my brother's house in Oregon. Maybe more.

Let's take last night's dinner. By the photograph you undoubtedly know what I cooked up. Squid and octopus risotto cooked in squid ink.

It is not long ago that creating the dish from local products would not have been possible. All of that has changed. In large part, thanks to Alex at Hawaii.

Eighteen months ago, I found a jar of squid ink in Alex's refrigeration case. Right above his large selection of cheeses.

Even though I am not a fish fan, I do like seafood. And the sight of the ink jar made me wish that I could buy a fresh cuttlefish -- the traditional Italian ink-dish. But unless one had taken an odd turn, I was not going to find one fresh here.

During the height of The Virus onslaught, our harbor was closed to fishing. That meant no fresh squid or octopus -- the next-best alternative. Instead, I made an ink-based risotto using canned clams. Not terrible, but not very good, either (inky dinky risotto).

That changed last night. Risottos are best when the ingredients are simple and complement one another.

I sautéed strips of squid and octopus in olive oil with onion, garlic, tomatoes, and garlic. I then added an international touch from another seafood-loving country by turning the mixture into a sauce with a good sake. The secret ingredient was the squid ink.

While the sauce was reducing, I sautéed an onion in butter, and then toasted the arborio rice. (Yes. Hawaii has arborio rice -- plus other varieties.) Then I slowly added fish stock to the rice -- bit by bit -- until it started to soften. At that point, I added the squid and octopus sauce, and cooked it all until the liquid could be emulsified into the rice. (The emulsification process is why it is important to use a starchy rice for risotto.)

A squeeze of lemon juice and a bit of lemon zest, and the plate was ready for the table.

As you can see, the dish does not have the tell-tale black of a truly Venetian risotto. The reason is that I did not want to make the mistake I made last time with my clam sauce (cristina potter, call your office). So, I cut back on the ink.

It was probably a wise decision. I used enough ink to add that distinctive umami for which the dish is noted, without making it look like something out of the Batman survival-rations kit.

It may not have been at the top of risottos prepared in Venice this year. But, it was, by far, the best risotto to come out of my kitchen in years.

There is a large bowl left over in the refrigerator.** If you happen to stop by.

* -- Of course, that generalization is based on the same error that makes inductive reasoning such thin ice. There is no such thing as Mexican cuisine, but there are lots of regional cuisines. I certainly have not sampled them all. But that is fodder for another essay.

** -- And, yes, I am aware that serving left-over risotto in Italy is still a capital offense. It should never be served other than immediately out of the pan in which it is cooked. But what are you going to do?