"madge, where are my socks" 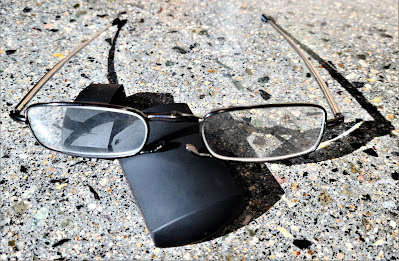 It was the first sound each morning in the household of uncle Noble.

Uncle Noble would be getting dressed, and when he got to the sock-donning portion of his morning ablution, he would bellow out to my aunt: "Madge, where are my socks?"

We all have our Noble moments. But, for most of us, unlike Uncle Noble, we simply cannot find what we want.

Let me give you a little example from the Mexpatriate manse.

I have been fortunate enough to get through most of my life without the need of prescription lenses to bring clarity to the world. But that is no longer true.

A couple of years ago, I noticed that the words on the printed page seemed to be getting slightly blurry. I initially chalked it up to shoddy publishing. Probably because all of us are reluctant to immediately admit the shell that carries our soul has a shelf life -- and deteriorates accordingly.

It was not every reading session. Sometimes, it would be fine. Other times, I could barely make out words. The solution with my Kindle was simple; I just cranked up the size of the font. But most of my news is not available on my Kindle. I read my magazines and newspapers on my telephone. And, there, I have a size limitation for font manipulation.

The solution was a simple one. I needed to buy some readers -- those inexpensive plastic lenses that perform as the workhorses of reading.

During my monthly comings and goings from Mexico to Oregon during the past fifteen months, I bought a series of readers. A set of three at Costco. Another at RiteAid. And yet another at BiMart, along with a nifty folding pair that the flight attendant on the Japan Airlines flight thought was clever and classy. She declared them "very Japanese." In truth they were very Chinese, as were the rest.

Have you ever noticed that if you have ten pens available to use that you soon have none? And, if you have just one pen (let's say a vintage 1931 Pelikan T111 Toledo you inherited from your father), you have one pen forever. There must be some unstated Newtonian Law of Motion that controls this odd form of osmosis.

Whatever the rule is, it applies to readers. Of the six pairs of readers I have bought in the last few months, I am now the proud owner of exactly one. The folding set so admired by the Japanese flight attendant.

What happened to the other five? I know what happened to two of them. Their Chinese provenance guaranteed that they would not be sturdy. They were inexpensive (about $20 or so) and they were not up to the wear I give to almost everything I own.

But that leaves three that are unaccounted for. Two of them disappeared in the last three days.

I tend to take off my readers when I do not need their service and set them down in the same place -- on my nightstand. That is the ideal procedure. But, too often, I will wander away from my reading (say, to pick up leaves in the patio or start my walk), and I discover I am still wearing my readers.

Instead of walking back to my bedroom, and having no Aunt Madge to call, I will set them down on a table or the nearest flat surface. That method has served me well. Until this week. When I returned to retrieve the glasses from where I thought I had left them, they weren't there. Nor were they anywhere I had been.

Never mind, said I. They will eventually show up. If I do not find them, Dora or Antonio will. But my sanguinity was not rewarded. I am now down to that one pair.

Here is my theory. One of three things has happened.

1. Someone is coming into my house and stealing my readers, but leaving far more valuable items untouched.

2. I have been hiding the readers in a secret place to stop the thieving described in Possibility Number One.

3. I have put them someplace and I have just forgotten where they are.

Over the years, I have watched people age and slip into the first two categories. That process is the foundation of the script of The Father -- a movie we should discuss with one another soon. And that very well may be my future if DNA has any part in it.

But, right now, I am in the third category. A familiar one to those of us who are enjoying our latter years.

Losing glasses is minor. Constantly forgetting nouns in the middle of sentences is a little more disturbing -- if only because I know it is a dress rehearsal for moving on to more exotic accusations when I misplace things.

The good thing about losing readers is that I do not need to fly north to replace them. I can buy them easily here in Mexico.

And maybe, just maybe, an Aunt Madge-equivalent, The Angel of Lenses, will show up with a box full of the readers I have lost over the years.

She was good at it.


Note --Let me share the first stanza of Billie Collins's delightful poem "Forgetfulness." I am starting to the live the art.

The name of the author is the first to go
followed obediently by the title, the plot,
the heartbreaking conclusion, the entire novel
which suddenly becomes one you have never read,
never even heard of,

as if, one by one, the memories you used to harbor
decided to retire to the southern hemisphere of the brain,
to a little fishing village where there are no phones.