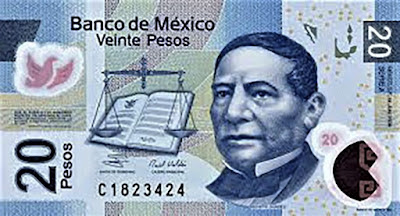 Some things take their time in Mexico.

It has now been three years since the Bank of Mexico announced it was withdrawing the 20-peso note from circulation (bienvenidos, benito -- y adiós). The only people who greeted the news with what passed for cheer were those who have been mistakenly leaving 500-peso notes as tips believing it was a 20-peso note of similar color and bearing almost the same portrait of Benito Juarez.

The rest of Mexico had other concerns. The 20-peso note is one of the three notes merchants rely upon as workhorses. Its disappearance would create a fiscal hole in their tills.

Not to worry said The Bank. We have you covered. We are going to issue more 20-peso coins.

That growl you heard was from the people who would now be carrying around an increased load of coins. Instead of a fiscal hole in the till, there would be physical holes in the trousers of consumers.

The Bank was correct in telling us not to worry because since 2018 not much has happened to bring the prophecy to pass. But there have been some interesting small moves.

The 20-peso coin promised by The Bank is not a new innovation. 20-peso coins have been circulating since 1980. But they are rather rare finds.

Whenever I find one I keep it. In my thirteen years of living here, my 20-peso zoo consists of exactly three coins. I had two others, but I mistakenly spent them thinking they were 10-peso coins. 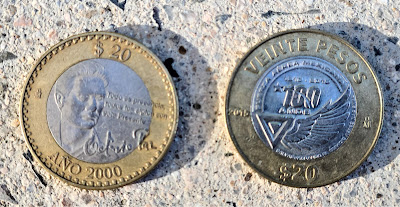 And why do people save them when they find them? For the same reason we collect anything else -- they are different.

Those are two of the coins that I have collected. The Bank has used the coin as a great medium for commemorating Mexican celebrities or historical events. My favorite is the Octavio Paz coin -- primarily because I like his writing, not because of any artistic value in the coin itself.

But those are old coins -- as you can see by the 2000 and 2010 mint dates. Where are the much-anticipated volume of 20-peso coins that The Bank promised in its announcement three years ago?

So far, I have seen just one. And I did not find it. My friend Julio received it in change at the restaurant he manages. 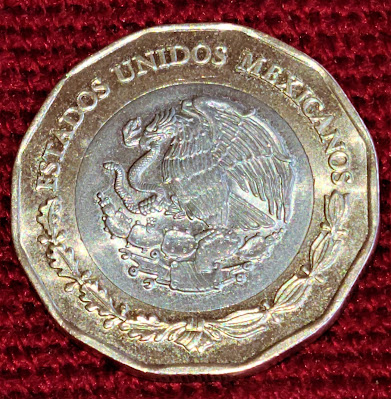 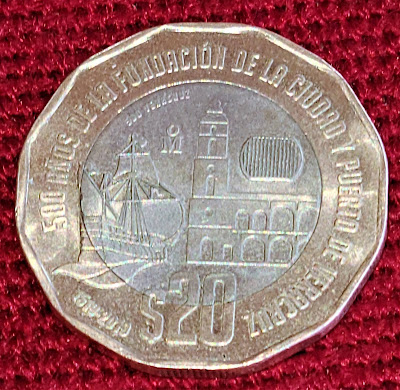 It is quite a nice piece of work. This particular coin maintains the same commemorative role as previous 20-peso coins. This time, commemorating the foundation of Veracruz.

And here is the rest of that story. That coin was set aside because it was different. But it ended up back in circulation -- having been mistaken as a 10-peso coin.

So far, The Bank does not seem to be very anxious to withdraw the 20-peso note -- even though it announced last month that the withdrawal was still on track.

The announcement was slathered with irony because in the same announcement that the 20-peso would be withdrawn, it also announced the issuance of a new 20-peso note. The new note is merely a commemorative note, though, it is not meant to extend the life of the Juarez notes -- at least, not directly. 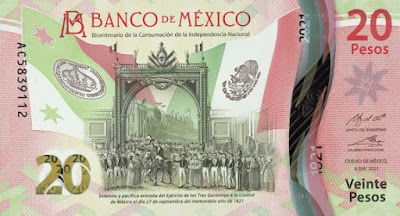 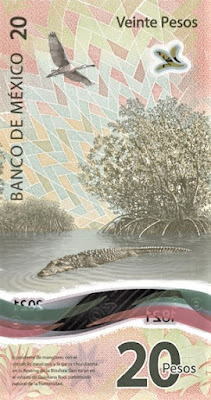 I am quite fond of this new commemorative note for a couple of reasons. First, on the reverse it features my favorite creature in Mexico -- the American crocodile.

But, more importantly, The Bank's description of the note contains what must have been an inadvertent assertion. The Bank claims:

The new $20 note commemorates 200 years of the independence of Mexico from Spain. It depicts when the army of the three guaranties (Religion, Union and Independence), under the command of Agustin de Iturbide, entered Mexico City on September 27, 1821.

Independence in 1821? That has to be a mistake. Everyone knows that Mexico's independence is celebrated as having occurred in 1810.

"Everyone," that is, except you dear readers who are aware of the muted dispute amongst Mexicans whether Mexico should celebrate its independence when Miguel Hidalgo declared it in 1810 -- or whether the true date is when Mexico actually attained its independence in 1821 when that scoundrel Agustin de Iturbide had his Caesarean moment marching into Mexico City? (1810 or 1821?) Or why not both days, the option chosen by The Bank.

Usually when new notes are issued, it takes months for the first one to show up here on the coast. Not this time. Julio showed me one yesterday that he had received in change.

But that does not explain why The Bank has been so slow in its promise to withdraw the 20-peso note and replace it with a coin.

When I asked my favorite grocer how long it takes for these changeovers, he smiled and gave me a perfect answer: "As long as it takes."

My pockets will be thankful for any respite they receive.