death of a playgoer 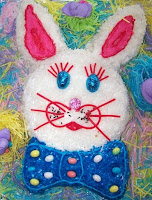 I was just about to make a promise I know I cannot keep.


I was about to promise this was my last post with "death" in the title. But that would have been a lie.


I have been obsessed with death since I was at least four. When my brother and I moved our mother out of her last house, I found an Irish Linen stationery pad. The pages were littered with the scrawl of a 4-year old writing his first two stories.


The first was about Dr. Bunny, who owned a dummy bunny. He spilled grape juice on the dummy and left on vacation. The police looked in the window and saw the dead "Dr. Bunny." They arrested the housekeeper for murder and electrocuted her. The end.


The second was about a boy whose mother baked him a rabbit-shaped cake for his fourth birthday (a somewhat more autobiographical tale). During the night, the cake bunny made a wish to be a live cake bunny. The cake bunny fairy godmother (apparently, it is a very specialized union) granted the wish. The cake bunny was attacked by rats, who devoured it. The end.


In the 1950s, the stories were prized as imaginative. In the 2000s, the child would be popped into years of therapy until he climbed a clock tower to settle scores.


But that is not the real topic of this post. Last Friday I scheduled dinner with Cynthia and Mike -- as you all know. I thought I was supposed to attend a performance of Arthur Miller's Death of a Salesman -- not one of my favorite plays -- on that same evening. "Attention must be paid" may be a fine sentiment, but a full play it does not make.


I started looking around for someone who might want to warm my season seat and who is not prone to being depressed by the turgid prose of Mr. Marilyn Monroe. It was just as well that I could not find anyone who met both criteria -- because my ticket was for the prior Friday.

That chronological handicap was consistent with another incident last week. In a meeting, I told my colleagues that we needed to get to work on revising some projections before the end of the year because we only had three months left. They just stared at me. I thought the current month was October.


As my time in Oregon begins to wind down, I suspect that I will have a few more of these time warps. And for those of you who said I did not need a list, this is why I need one.


Near the end of Annie Hall, Alvy and Annie, after breaking up, are dividing up their books. Alvy pulls out a copy of Denial of Death and nostalgically reminds Annie that it was the first book he bought her. She responds: "Right. Geez, I feel like there's a great weight off my back."


I have always loved that scene. Maybe this move I will be able to toss several of those books in the box that remains in the past -- just like Dr. Bunny and the gnawed cake bunny.
at February 02, 2009

You are a sick man. Many Gringos who move to Mexico are sick people, so you will fit in well.

Steve could you be thinking this way because you are leaving what you know best and it infers an end to familiarity? The new start is just around the corner to welcome you. Ah, life on the beach. Take care.

You are DEFINITELY on "overload"....chill.

Michael -- I thought this would burnish my résumé to enhance my abilities to slip across the border.

Gloria -- I think the better answer is that I am simply nuts.

Babs -- After my sermon yesterday, I was going to take a short nap. It turned out to be a 3-hour snooze. Maybe the next four weeks will be a bit more soothing. As you would say: HAH!

cake bunny fairy godmother, you're too funny. and i agree with babs, you're on overload. take it easy.

Prozac is cheap in Honduras. I don't know the price in Mexico but maybe ... well you know. But I have my own obsessions. I have always been obsessed with weather, as my mom and grandmother before me. My grandma kept a diary. Mostly it was observations about the weather. Wow. I loved that lady.

Prozac, nothing. Magic mushrooms are the way to go in Mexico.

Teresa -- I think this week will start the decompression.

Laurie -- But not that decompressed.

Michael -- And certainly not the old shroom decompression.

Death to the use of "death" in blog titles! It is an infidel practice! Let it die a painful death.

Kim -- A moritorium on death?

Moratorium on death? Touché, Sr. Cotton. Had me laughing out loud.

Though now that I've looked it up (prompted by our difference in spelling), I see that the root of moratorium is not "death," but rather "delay."

From merriam-webster.com: Etymology:
New Latin, from Late Latin, neuter of moratorius dilatory, from Latin morari to delay, from mora delay.

But I'm all for delaying death, so it all fits in a bizarre kind of way.

The art of humor is that the jokester and the joked-to simply accept the same perspective -- even if mistaken. Some great comic once said: "Buy the premise, buy the shtick."

By the way, Kim, I am glad our minds work the same way. "I was willing to accept the "mor" as being close enough to "mort" to make the irony stick.

Of course, Kim, there is some question whether using the graphic of a hand gun mouse is getting too far away from our death topic. (That reminds me of the time an English woman asked to see my hand gun. But that is another story.)