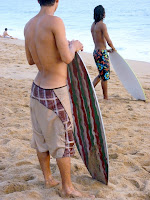 My little fishing village on the Mexican coast is not a hotbed of athletics.


As in any town in Mexico, there are the odd football matches. And even a rodeo or two. But Melaque is not known for its sports society.


With one big exception --skim boarding.


I have commented several times that the waves on my beach are not swimmer friendly.


The pitch is steep enough that the waves do not merely pound the sand. They slam it. The WWF has nothing on drama queen noises in comparison with the sounds the ocean makes when greeting the shore.


But that violent one-break surf creates a veritable Aspen for the local skim boarders.


If you do not know what a skim board is, think of a short surf board that is smooth on the bottom.


The boarder waits on the beach for a likely wave. If he spies one, he tears off in Jesse Owens style.


When he hits the surf line on the wet sand, he drops his board (taking advantage of another Newtonian rule of physics), jumps on it, and sails out into the surf, where he catches the curl of the wave. 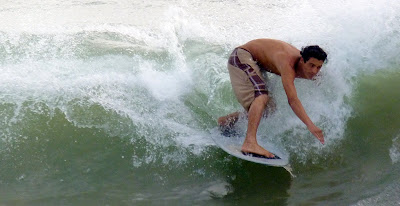 Most of them are in their teens. Some are older. But, unlike snow skiing, it is a sport not to be enjoyed by white-haired men, no matter how many wily tricks they may have learned. Wiles do not equal balance.


But watching these guys on their boards is a cultural potpourri. Graceful as ballet. Enchanting as the Cirque du Soleil. Invigorating as active youth can be.


What is missing are young women. Oh, they are at the beach. Lined up in a row with their babies. Watching their men grapple with nature. All attired in proper Nazarene Church camp summer wear.


I asked one of the young women why she was not a boarder. She simply laughed, and said: "That's for boys." And looked at me as if I had just asked why boys don't wear skirts.


I have heard there are some women skim boarders. I simply have not seen them in my stay at the beach.


Until they do appear, I will have to be satisfied with watching the fathers of the little babies who accompany the women on the beach.

Unlike north of the Rio Bravo, we Mexicans do not pretend men and women are the same.

Felipe -- And as my French friends say: "Vive la différence."

I suspect that the women were barefoot and use to be pregnant....
Ah....culture difference.
I was expecting to hear your mastery of the board...you certainly have had enough time.....you know they are a chick magnet. ( Ok, maybe not in Melaque )

Ah, Nazarene metaphysics. It's a way, amongst an infinite number of possible ways.

Just how plastic is culture? More than we know. Often less than we hope.

Location is everything. The openings for Being are hidden in the moral imaginations of those you hang with, with the usual limiting acknowledgments to the often abrupt interruptions by an unfeeling universe of physical operation.

As Hume noted, we may not have absolute certainty about our empirical observations, but what certainty is lacking does not make us leave by the window than by the door.

I have a female friend in Cancun who is an avid skim boarder. There are female ones around, but not many.

does Hume have a blog? Is it written in English? He's sounds interesting, just can't understand a thing he said up there in ANMoose's post.

Constantino -- I would undoubtedly have the same result that I had last year when trying to remember how to use a skateboard. Not a pretty picture,.

ANM -- Yup. Do you think Hume was an Aristotlean?

Islagringo -- They are certainly out there. But I have not spotted one yet.

DanaJ -- ANM is my good friend the philosophy professor. He job is to clarify the complex.

Are you trying to increase your ratings with a bit of skin? Advertising executive next?

Horst -- Anything for a headline.

Have you watched the annual skimboard championship, usually held near Laguna Tule, in Villa Obregon?

I haven't. But one should occur while I am here over the winter -- not far from the house.