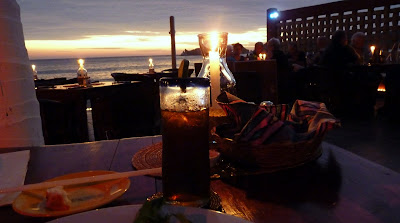 As Mrs. Wilson, the head housekeeper of Gosford Park, Helen Mirren gets one of the classic lines of cinema:

I know when they'll be hungry and the food is ready.

I know when they'll be tired and the bed is turned down.

I know it before they know it themselves.

I had one of those practically perfect experiences today on my third (or fourth, depending on how we're counting) day of Thanksgiving.


My small fishing village by the sea is not without its patina of sophistications. Most of our eateries are of the taco-burrito variety. Food that fills without really satisfying either the stomach or the soul. But there are exceptions.


One of the best is Restaurant Maya. I first ate there in July of 2008 when I test drove the house where I am now living. I loved the food.


The owners did not have the place open this summer. Instead, they were in British Columbia. But they are open now.


I was a bit reluctant to stop by -- for two reasons: 1) I was wearing my beach bum outfit and 2) I was afraid my gluttony over the past few days would take the edge off of the food.


Let me tackle ambiance first. Maya is not a shorts and flip flop place. If that is what you are wearing, you will be welcomed, but you will immediately feel as if you stepped onto the wrong sound stage. That was exactly how I felt sitting amongst my better-dressed expatriates.


I purposely use the cinema analogy. If Shakespeare is correct that all the world's a stage, Maya is the Cole Porter Theater.


I sat there tonight looking at the self-conscious arrangement of the well-manicured tables with their tidy candles and cutlery. The ocean and sunset as a backdrop. A canopy of palm trees as a roof. Subtle jazz drifting through the open air. Almost as if Erté had taken a tropical turn.


Even if the food had not been good, the visual effect was enough to make you believe Clara Bowe or Norma Desmond could be sitting next to you at dinner.


But the food is good. No. It is excellent. Considering the ambitious nature of the menu, I am amazed at the consistency.


I tried a mahi mahi marinated in lime, basil, and garlic -- along with side dishes of spinach risotto and a carrot-based puree.


I do not like fish. But this I liked. Of course, I also stuffed in a plum flambé with vanilla ice cream.


Try that in Manhattan or Montreal.


But, best of all, were the waiters. Black-clad as any stage hands, they disappeared into the darkness to appear even before the diners knew they needed anything. The perfect servants. Hardly the usual reticent service where waiters need to be summoned with gongs.


Thus ends my journey of self-indulgence. Well, this bout, in any event. Another thing for which I can be thankful.


If all goes as planned, this coming week, I will start some mini-journeys around Mexico. I have no plans. I intend to just head out.


Some of the trips may take me away from the house. If so, I may miss a post now and then because the wireless connection is not working on my laptop.


But you will hear it here first. I may not be the perfect servant, but I will stay in touch.

i was a bit confused when reading you first tried that restaurant in july 2009. you did mean 2008, right? by the way, when do you move to your new place? i thought you were just in the house for 6 months.

that restaurant sounds great-a must visit when i come to melaque someday.

have a great day!
teresa

Great restaurant, more then competent chef. She was in Northern California for years, if memory serves me well. I've never had anything but superlative and delicious meals there.
Have fun on your trips.

You wrote that we may not hear from you as you make your playboy of the western world tour of Mexico because the "wireless connection" of your laptop is not working.

If I may take a Cartesian position, I would like to suggest that that wireless connection is not with the laptop, but, Sir, with your brain -- more specifically, a stimulus-starved pineal gland which has lost contact with the hovering perturbations of your mind.

In fact, were I to use a metaphor, I would present to you that your mind does not hover meditatively about your pineal gland, but, rather, performs a frenetic ballet in the much the same way that night swallows swoop around the pool at night, something like Bettie Davis soliloquizing on meth.

It is a poor craftsman, Sir, who blames his tools, my grandmother used to tell me. And now, I have the delicious pleasure of telling you.

Point the car toward San Miguel. Once there, you´ll forget the beach.

Hmmmm, what restaurant did she own in Northern CA?

'Bettie Davis soliloquizing on meth' - what a great line!

As I read about plum flambé with vanilla ice cream, I could not help remember to ask how your diet is going. I know that you were prudent on your weeks cruise, and that you only visited the healthy places in Disneyland, so you obviously were rewarding yourself with the ice cream to calm your hankerings for something really unhealthy?
$22 Dollars for dinner for one?

You are a rich Gringo to drop those kind of pesos. You will be welcomed superbly in SMA. If you like I can send you a GPS with the coordinates pre programmed in there. It is only a days journey, in fact Babs will have here home available for you while she swaps locations.....a perfect solution!

I knew it was Maya from the photo. We first had dinner there only weeks after they first opened. In those days, the only servants there were the 2 owners. I wish I could tell you how wonderful the food was, but it was'nt. So I am sure they have perfected their skills by the sounds of things. We will give it another shot next time we are in town.

Babs -- When you visit, we will dine there.

Teresa -- Thanks for catching the error. Too much fish, I guess.

ANM -- Ah, resorting to Cartesian logic. The last act of a desperate mind. Or is it the second act of Hamlet?

Tancho -- the diet took a terrible noise dive during the past three weeks. I must now steer a better course. As for the cost of the meal, my village offers a wide range. But it is a tourist town, you know.

Mexican Tralrunner -- My philosopher friend does have his way with words, doesn't he?

Chrissy -- Come give it another try. Saturday night was pure magic -- even after spending two weeks on a cruise and in Disneyland.

Salt water is in your veins? From what you have said, you rarely set a toe into the surf. You just like the sound and the view. Get a nice screen saver and DVD.

I'm thrilled you are off to have some adventures. You had gotten into a bit of a Melaque rut, so traveling will do you some good. And I'd second the comment that you should check out SMA. It would allow you to have plenty of conversation in English, and still provide you the opportunity to speak Spanish, if you so desired. And I'd also check out Guanajuato, which is relatively close. A beautiful spot, a UN World Heritage Site, it also harbors a few expats, though nothing like SMA. Also with its steep hills and lack of parking, it'd be good exercise living there. But it's also very interesting to visit. F and I were there a few years ago. One day I'd like to go during the Festival Cervantino, but that's another story.

We eagerly await your posts from the road.

Kim G
Boston, MA
Where we are dying to cast off the job and motorcycle through Mexico.

I love that movie. And I know that line! One of the few movies I can watch more than once. Or twice.

Felipe -- Yup. I have taken up regular swimming in my little bay. The waves are finally cooperating.

Kim -- Guanajuato is on the visit list. But I want to get some of the local beaches under my belt, as well.

Laurie -- I have watched it several times now.