tail of the turkey

So, here I am. Three days into my turkey bender. Even though there was a bit of pork sandwiched in between -- as if I were a congressman from Boston.


I have enough tryptophan in my bloodstream to have a go at the Rip Van Winkle Open.


On Friday night I dined with two local attorneys, a hotel owner and his wife, and a friend from Tuxpan. Our conversation was primarily in Spanish. I discovered my listening skills have improved over the past eight months -- to the point I could enjoy (or, at least understand) the lawyer jokes.


We ate at one of the beach spots where herds of expatriates congregate -- usually. The type of place you could not swing a cat without causing abuse concerns from a score of Canadians. In a normal year, the place would have an orderly queue of expatriates waiting for a table.


The upside was we enjoyed amazingly attentive service. The downside is if the wanderers do not show up, there may be no place to swing my cat.


The photograph at the top of this post illustrates the problem. That is the main shopping street in the village. On Friday night. If mouths are to be fed, the shops should be filled with tourists willing to exchange hard-earned pesos for shells and sandals. It is simply not happening.


A recent issue of The Economist puts the Mexican economy in perspective. It is hurting.


Fourteen years ago, Mexico's economy came close to collapsing. The peso was devalued in the midst of a bad recession. The United States put together a $50 billion rescue package, and the Mexican economy started to soar with the additional boost of the North American Free Trade Agreement.


I lifted the following graph from The Economist article: 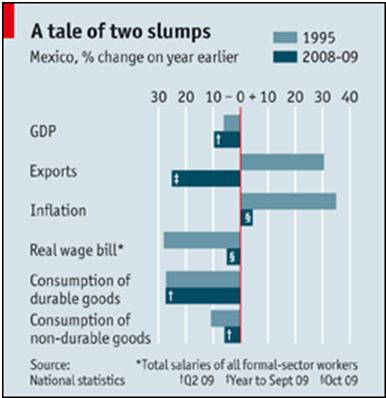 It illustrates that the current recession is deeper than the 1996 recession (with almost a 10% shrinkage of GDP this year) and a drastic decline in exports. So far, inflation has not been a problem.


Mexico is often a slave of its own history, even when it attempts to toss off its yoke.


One goal of the Revolution was to make Mexico less dependent on outside economic forces, especially the United States. Mexico abandoned most of that principle with NAFTA.


But another historical factor undercut that brave move. Even though Mexico had trade agreements with other countries, they were primarily ignored in favor of trade with the United States. When Mexico was a colony, Spain allowed Mexico to trade only with Spain --with all of the troubles that come from a closed economic system. Inadvertently, Mexico resorted to historical type -- and has now paid a very high price for the slip.


But what does this have to do with living our lives in Mexico?


Successive Mexican governments have failed to address a major flaw in Mexico's fiscal health. For historical reasons, almost all taxation is imposed by the federal government. Mexico collects only 11% of its GDP in taxation -- one of the lowest in the world.


As a libertarian, that figure seems just about right to me.


The problem is that the figure has nothing to do with liberty. Mexico collects nothing more because the wealthy are powerful enough to prevent any additional taxes and the poor simply cannot pay more.


The Mexican government recently went through the political equivalent of a slap-down merely to increase the VAT by 1%. And raising taxes during a recession is usually counter-productive -- especially for raising revenue.


Some politicians have raised the possibility of an expatriate tax -- with details remaining increasingly vague. The problem with that option is that it would cause more problems for the government and raise very little revenue. But that is a logical response to a system that thinks it needs money.


If it is to recover from this recession and protect itself in the future, Mexico is going to have to make some very hard choices.


The domestic economy must be reformed with the goal of keeping Mexican labor at home -- rather than relying on remittances as if it were some Third World banana dictatorship. That means repealing regulations that prevent businesses from starting and operating; jettisoning the system of favored monopolies that stymie innovation; reforming trade union laws to remove their veto power over important economic matters.


Can it happen? Certainly, with a political will.


Will it happen? Mexico is about to enter an interesting time. Next month PRI -- a party not known for its reform affection -- will take control of the Chamber of Deputies. We will see if it has learned anything during its exile from power.


In my small fishing village by the sea, the big question is going to be whether the government will simply get out of the way to let turkey dinners be served to restaurants filled with tourists willing to part with their cash.

Sadly I find the Mexican middle-class carrying the same attitude that their U.S. counterparts had before their crash - they ignore the trends and reports; smiling and espousing that things continue to grow and everything they have will continue to get more valuable - a very dangerous outlook at present here in Mexico.

In the city of Xico postage stamp piece of land costs $30,000US and up - there is no safe haven in this economic decline.

However a depression tends to level the playing field and put things back in perspective.

It is going to get interesting.

Four of the six items on that graph are good or neutral news, especially the low inflation. My glass is half full, not half empty.

interesting post indeed. wish i could be down there spedning pesos-someday ;-)

glad you've enjoyed your days of eating turkey. our leftovers are almost gone and it is time to start cutting back if i want to be in shape for the cruise in april. it will be here before we know it.

also, i'm very glad to hear how much your spanish is improving. you hadn't mentioned that in a while. are you still taking classes?

have a great weekend, although as mr. zapata would say, every day is a weekend for you ;-)

One of Mexico's bigger problems is that historically 40% of government revenues came from Pemex. Apparently (and I haven't verified this), they were smart enough to hedge oil prices in the summer of 2008, thereby preventing a devastating blow to the budget as oil prices collapsed. Still, the Cantarell field, Mexico's biggest, is still seeing steady production declines, which will be hard to offset with higher prices. In the summer of 2008, the government debated amending the constitution to allow in the foreign majors, who have superior technology, to help stem the decline. But the PRD spun it as an affront to Mexican sovereignty, and the measure didn't pass.

The recent budget measures and tax increase have stemmed the decline in the peso, which is now threatening to break out to the upside vs the unloved USD. If I were an expat relying on a cheap exchange rate, I'd now be thinking of moving perhaps a year's expenses into pesos and taking advantage of higher Mexican interest rates to boot. Anyway, I digress.

The longer-term Mexican government budget will remain threatened by the longer-term decline in Mexican oil production. Some day they will have to impose more taxes, and that will be unpleasant.

However, the political transformation leading up to the 2000 election of Vicente Fox as president was a long shot at best. And if someone in 1994 had written a paper projecting that the PRI would lose the 2000 election to another party, they would have been laughed out of the country.

So don't underestimate the ability of Mexico to adapt when it needs to. This country has made far more progress than anyone would have guessed. And it doesn't suffer from the USA's delusion that funds are limitless, and that the bond markets can be relied upon to fill the funding gap forever. So Mexico will face the realities and deal with them.

Meanwhile, even expats benefit from the oil patrimony delivered by Pemex.

So enjoy the low taxes while they last. Someday too that will end.

Kim G
Redding, CA
Where we are visiting Mom for Thanksgiving. And are thankful for her influence in our life.

So now that you have kicked over the rice bowl, so to speak, where does one get the crystal ball or crystal balls to hang on, to both investments, money and the crystal balls so they do not clank together and crack?
Some one should be able to make some decent change on this "change".....

The key to changing Mexico (to me) is to get the power back into the hands of the people. Monopolies, organized crime cartels, and NAFTA are all huge influencers of the political machine that steers the economy away from this. A political will can change it, but as the Zapatistas have learned, violence during confrontation may be inevitable.

I agree with John that in general, mass populations of Mexicans (and Americans) do not anticipate problems until they are personally affected. They will not get involved politically unless they are forced to - like the Zapatistas.

Calypso -- "Interesting" is the word.

Felipe -- This is going to be one fascinating year in Mexico.

Teresa -- I am enjoying my life of Saturdays.

Kim -- You are correct. Pemex managed to get its oil futures sold at the highs of 2008. Unfortunately, there is a double (or triple) whammy on its way. The fall in oil prices. The decline in oil production. Mexico's lack ot political will to reform the oil industry. Like you, I have been pleased with the reforms Mexico has made during the last decade. When I started studying these issues in the mid-1970s, I had no hope that Mexico would come this far this fast. However, as the last presidential election showed, danger lies just below the surface.

Tancho -- By listening to Kim?

Leah -- I fear that the Zapatistas and their ilk offer only a return to governmental serfdom -- the very thing that the Central Europeans were wise enough to dump.

That could be true, and I'm not saying I support the Zapatista ideology. My point was simply that a small angry minority will not succeed in revolution of any kind without violence against the status quo. This is clear throughout history.

I fear that without a mass population willing to trade in social status for freedom, things will not change.

Leah -- If done properly, people can retain both their political and economic liberty. And I wish Mexico my best in that pursuit.

With the exception of the American Revolution (solely a political revolution), the revolutions of the 18th, 19th, and 20th Centuries were all tragedies for their nations -- from Nazi Germany to Communist-Fascist Cuba to Communist China. Even the 19th Century revolutions of Latin America are only now evolving into the liberal democracies that their architects imagined, notwithstanding buffoons like Chavez.