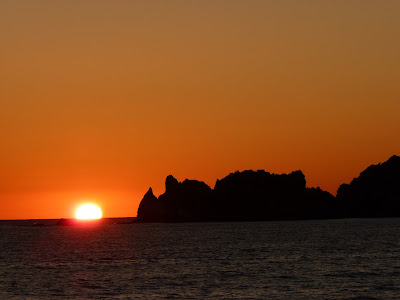 I was going to spend a lazy afternoon; but, it spent me.


One of those tropical winter days -- all heat, light, and sound.


Joel Grey sings I am a Sentimental Man in the background.


I am not a sentimental man. I profess no love of mawkish emotionalism.


But this is a week to start toting up life´s ledger. To let the left side of my brain dance on its own balcony.


I am moving house. To a sedentary laguna with its sunning crocodiles and hyacinth-hopping grebes.


Away from the one thing that has defined my months in Mexico -- the Pacific. The sea drew me and has held me here.


I have always loved large bodies of water. As a sailor, a tourist, a sometimes resident. Whether the Pacific, Aegean, Atlantic, Indian. North, or Caribbean.


I have been as beguiled as Odysseus by their siren calls.


With the exception of stormy days, my experience is that waves lap the shore.


Not in Villa Obregon. When I arrived in April, the waves would crack against the beach. Not crash. Crack.


They were loud enough to startle Jiggs into believe we were in the midst of thunder. The impact was great enough that the house would shake with each wave. I have missed several earthquakes -- some this week -- because I mistook the shaking for waves.


I have a friend who is a cinematographer. I have told him several times he should come to my beach to record the waves.


He could create a complete sound effect library. Rifle shots. Car crashes. Subway trains. Fighter jets. They are all there. In the waves.


The price to pay for the symphony is dangerous swimming water. More than once the waves have introduced me to the sandy bottom.


For six months I lived with my temperamental neighbor. Then, one day in October, the mood switched. Sunday the equivalent of broken crockery, Monday all sweetness and light.


I thought I had traded places with Islagringo. The effect was almost Caribbeanish. The waves caressed the shore. Swimmers enjoyed the surf without worrying about spending the rest of the day getting sand out of their suits.


The only people disappointed with the change were the skimboarders.


Perhaps, Poseidon was content. If so, his bipolar disorder flared up again last week.


The waves are back with all of their fury. Living up to their nickname La Playa de las Tambors -- Beach of the Drums.


I entered this play when the sea was thrashing the shore. I now leave it almost as it was nine months ago.

There is something comforting in that. Consistent unpredictability.


But I leave without sentiment. Because the sea does not care if I am there or not.


And I am pleased to know it will always be just as I left it.

As one who is truely more comfortable on the water than tierra firma....I feel you will gravitate back to the ocean before long.
We only live once.
Sincerely,
Francisco

I agree. I finally have to resort to ear plugs several night when ever we stay with Nancy and Richard's.

good luck with your move steve. looking forward to hearing all about your new place once you've settled in. beware of sunning crocodiles. if they are like gators, they can move mighty quickly on land. as college students we would feed the florida gators at a lake on campus-how foolish we were. they'd be just a few feet away and we'd throw them bread. luckily, none ever decided to attack us.

have a great day!

did you say you'd be coming up during the holidays?

had one decided to cho

How rare to catch you in a typo--it's Joel Grey, of course. And I would have thought you more "Mr. Cellophane" than sentimental in the Grey oeuvre, or even better yet, a Yankee Doodle Dandy.

Francisco -- At least I will be back for visits. For the next four months, I am just a few blocks away from the Pacific.

Chrissy -- I adjusted within a day. When he realized it was not thunder, Jiggs adjusted immediately.

Teresa -- I have great respect for reptiles that can tear off limbs.

Cwilson -- And that one I should have caught. I found two other typos, but they were not of the Gray/Grey variety. One of these days, I need to catch up with you on other typos in life.

I HATE moving - and do it often.

Calypso -- I love to move merely for the change. It is the packing that annoys me. Where does all of this stuff come from? But I had best get used to moving if I am going to follow my 6 month rental program. Jennifer Rose may be correct. That plan is nutty.

You are moving again? Oh my goodness. Lucky though, we won't lose touch with you. Safe travels. But where will you go? You are leaving? But..but. Oh well, save travels as I said.