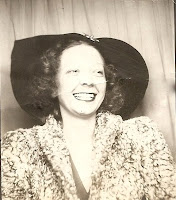 My Aunt Bessie was the Queen of Spain.

The fifth card for an inside straight.

Every family has a Mame Dennis -- their own Auntie Mame. Bessie was ours.

Not my Great Aunt Bessie. She was different. She drank. She smoked. She swore like a madam. And she laughed with a cackle that could make Calvin Coolidge smile.

Her goal was to enjoy life and to be the center of attention wherever she went. She was not going to starve at life's banquet --and she was determined that no one she loved would even lose weight.

Aunt Bessie and Uncle Don had no children of their own until I was well into elementary school. I had the honorary role of being their boy. From time to time, I would stay with them and join them on their adventures.

The year was 1958. The Fourth Republic had given way to the Fifth, and Charles de Gaulle was the new president of France. It was an era of hope in Paris.

I can still remember the little night club on the Left Bank. Almost as if the set of Casablanca had been transported to Paris.

In the burst of a spotlight, there she was. As small as the light was bright. Dressed in black -- stark against her silver heaven.

There are moments we will never forget. For me, that light, that figure are burned in my memory.

The haunting opening strain of Le Fete Continue. The dry cough -- barely short of a hack.

And that little voice. Hoarseness echoing smoky years. But growing stronger with each bar -- singing with the power of a torch singer who can exercise the magic of music to put her flame back in her life.

That night is one of my favorite memories.

Unfortunately, it never happened. There was no trip to Paris. No night club. No Edith Piaf.

But I am so convinced of its truth that I would tell the same story under hypnosis. It is that real to me. I believe it happened. I just know it didn't.

So, why does it keep replaying in my mind like an out-take from a Claude Chabrol film?

I forgot to tell you one thing about Aunt Bessie. She was a master story teller. The best. Garrison Keillor could have taken lessons from her.

Every tale improved over time with each telling -- like a Chateau Margaux aging to its prime. Occasionally, it was even possible to recognize the original event.

But she was also a dreamer. The youngest of seven children, sixteen years younger than the oldest, she was allowed to be the princess and to spin dreams.

The last time I saw her was in 1998. I was showing a young English woman around Oregon when I received news that Aunt Bessie had been hospitalized. The years of enjoying herself at life's banquet had weakened her heart, but not the heart of her life.

The moment we entered the room, Aunt Bessie was on stage. And we were pulled into her gravitational pull. The moons of Jupiter would have had a better chance of escaping than we did.

When Aunt Bessie heard my friend was English, I was reduced to a supporting cast member, and Hilary was invited to sit beside her on the bed.

They talked of gardens and castles and manor houses and dead kings. They would have gone on for hours if the nurse had not scolded us for overstaying our visit.

As we were leaving, Aunt Bessie took our hands and said: "Thank you both for taking me to England."

At the time, I took her comment as one more of her heartfelt, slightly hyperbolic statements of gratitude.

That was the last time I saw her alive. Her heart simply could not go on sharing life's bounty.

When her daughter, Gail, went through her effects, Gail found a note that she forwarded to me. Aunt Bessie wrote the note about a year before her hospitalization -- obviously knowing the end was near.

The note said that she had only one regret in life: that she had never been able to visit England. But she hoped someone would take her there -- one day.

That note was almost a Rosetta Stone to my aunt's character. It helped to explain her emotional thanks in the hospital.

But more than that. My aunt was one of those people who could eke life out of every experience -- by traveling, by reading, or by adopting for her own the experiences of others.

Did I see Edith Piaf in Paris with my Aunt Bessie and Uncle Don?

The answer is as much yours as it is mine.

But I know two things.

I enjoyed my trip to England with my aunt.

And I have no doubt -- she was the Queen of Spain.

Thank you for sharing Aunt Bessie with us. She was truly a remarkable person.

What a wonderful story. I think every family has an Aunt Bessie. We are are truly blessed by people love life that much!

What a great story. I wish I had an Aunt Bessie in my life! By the way, I live in Dallas, OR and follow your adventures every day.

Thanks, your tribute to aunt Bessie was lovely.

Aah, you're back in form with a wonderful story this morning. You conveyed a touching and nuanced non-judgmental love of your aunt to me. Having a hard time reconciling this with the conservatives I know here NOTB.

For a brief few minutes there, I was travelling in time and enjoying every moment of it. How lucky you are to have had an Aunt Bessie. My dad always told us stories and we would all sit at the table enjoying his escapades. Thanks Steve, that was great writing, I am now ready to tackle todays duties. Take care and have a great weekend.

Oh and by the way, Aunt Bessie was beautiful and I'm sure she caught peoples eyes with that smile.

You had me, going for awhile.

You lured me, in. Caught, hook, line and sinker, you stinker.

And in your own storytelling, Aunt Bessie lives on. Now immortalized in the whirling bits of a thousand hard drives, a thousand routers, spanning the globe on a slender beam of light, truly into the great beyond.

Thanks for sharing. As always.

You have a way of telling that takes your readers right along with you.Great story!
Nita

Quite a swell dame she was. You didn't say much about Uncle Don, and I'm curious what he was like. He had to be quick on his feet to keep up with her, or was he?