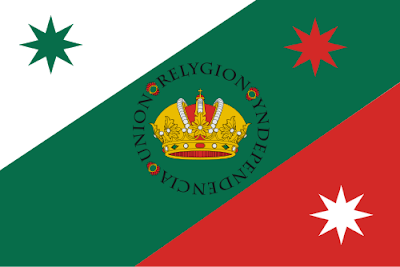 Flags are the standards of national myth.

Take a look at the flag pictured at the top of the post. What can we tell about the nation it represents?

Obviously, a monarchy. The crown is a dead give-away.

And the national creed is not subtle. Right in your face.  Religion.  Union.  Independence.  All in a romance language.

It would be understandable if a reader thought he was looking at an early version of a flag from the Kingdom of Italy. But it's not. It is the personal banner of the first ruler of the newly-independent Mexico: Emperor Agustín de Iturbide.
But it was never the official flag of Mexico. That honor goes to this beauty: 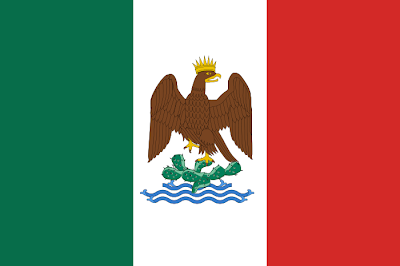 That flag looks far more familiar to us.  With a few design changes, it is the same flag we see in front of every government building in Mexico.  And it is replete with additional myths. Including that crown on the eagle.

The colors are a good place to start.  Many of the leaders of the Mexican independence movement admired the French revolution.  Choosing a tricolor design was easy.  Just substitute Mexican green for French blue, and you have the basic flag.

Being romantics, they ascribed qualities to the colors.  Green for independence.  White for religion -- Roman Catholic, of course.  (The anti-clericalism of the Mexican elite did not attain dominance until the reforma thirty years later).  And red for the union between Mexico's people.

But the coat of arms in the center embodies the mysticism of Mexican myth.  The story goes, sometime in the early 1300s, the Mexica people (one of the component parts of what would one day be the Aztec Empire) were on the move searching for a permanent home.  They believed their god, Huitzilopochtli, would provide a homesteading sign: an eagle perched on a prickly pear cactus while eating a snake.

Mexico has eagles, snakes, and cactus galore.  So, the housing options seemed open-ended.  But, Huitzilopochtli must have had a good sense of humor.

Instead of an eagle showing up in the rolling hills of central Mexico, the designated eagle landed on a cactus on a small, swampy island in the middle of a lake.  An island that would be the root of a vast Aztec empire -- until the Spanish showed up and decided the spot would be a far better site for the capital city of their new colonial empire.

Thus was born the eagle myth.  Along with a national coat of arms and matching flag decoration.

The first eagle wore a crown.  Just like the emperor.  But the crown and the emperor were not to last for long.  Both were sent packing in 1823.

The crownless republican eagle ruled until the French decided Mexico needed an Austrian prince to be the next emperor of Mexico.  The Aztec eagle turned into a Roman finial, accompanied by imperial eagles sprinkled on the tricolor in a style only a Napoleon could love. 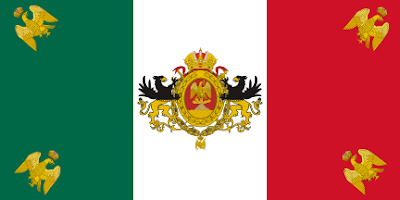 The only retained Mexican influence was the tricolor itself.

There were other reasons, but no self-respecting Mexican was going to allow his country to be represented by what looked like a tea towel purchased at a shop outside Neuschwanstein Castle.  Out it went in 1867 along with Maximilian's bullet-riddled body.

The crownless-eagle returned for another 26 years, until the eagle got tired of facing to the right.  For 23 years, he faced to the left.

When the revolution toppled the dictator Porfirio Diaz, Mexico decided it needed a new flag to represent its revolutionary fervor.  Instead of the eagle's head being in profile, the whole bird would be in profile with a more natural look.  Heroic.  Audubon as social realism. 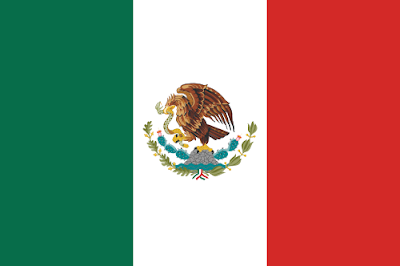 And then the Olympic games came to Mexico in 1968.  Mexico spiffed and buffed.  Making Mexico City shine.  (With the exception of some students who bothered to get in the way of a government born of revolution, who knew how to tend to protests.)

Mexico got a lot of new buildings for the games.  But it also got a new flag -- the flag we see today. 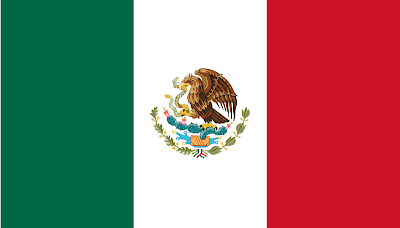 All of the myths and symbols have been retained since independence -- even though the colors have new meanings: green for hope; white for union; red for the blood of heroes.

Like most nations, Mexico thinks very highly of its symbols.  The flag is the embodiment of the nation.  Every morning at schools across Mexico, children parade it, salute it, and pledge their sacred honor to it.

Even this post could be subject to Mexican law because images of the flag are protected.

Anyone who broadcasts an image of the flag is required to have a permit.  Some of us remember the dust-up caused when MTV Mexico canceled an episode of South Park because the program featured a Mexican flag -- and the government had not issued a permit.

You will not see protesters burning Mexican flags in Mexico -- and getting away with it.  I suspect that Austrian-inspired table cloth could be burned.  But I am not even certain about that.

To postmodern eyes, a lot of that seems odd.  But, Mexicans love their flag because they love their country.

Later this week, we will discuss Mexico's interesting national anthem.  A tune fraught with as many myths as the Bandera de México.

Your history of the Mexican flags was quite interesting.

Thanks. As you know from long experience, flags are one of my few obsessions.

The giant flag in the middle of the Zocolo in Mexico City is a most impressive sight. I tried to get a photo of it but there was no way to get it all in with my camera. I loved being there several times. As "Mom" said, your history was most
interesting.
Nita

Nita -- There are several monumental Mexican flags -- including one at Ensenada. But the largest is in Monterrey. Weighing in at 230 kilograms -- over 500 pounds.

Great post Steve! I don't know whether you ever read about this story, of Mexican officials getting mighty hot under the collar a couple of years back when a Big Brother show in Australia made a bit of a boo boo with the Mexican flag. They really do take it very seriously!

hello mr cotton. :P. Let me congratulate you for your nice postings, they are impressive and very well documented. I'm Gio, I'm from Mexico, Guadalajara to be more accurate, but lived most of the time by the pacific coast area; I was a teacher in that area then I came to vacations to california visiting my sister and now it's been almost 10 yrs living here, but still miss mexico, and planing to go back to stay. You're so totally right about tv news in here that's why I decided to not watch tv, almost 5 yrs ago, now I only surf the web and read blogs,.. that's how I found this good one. congratulations ;).