what's good for the goose 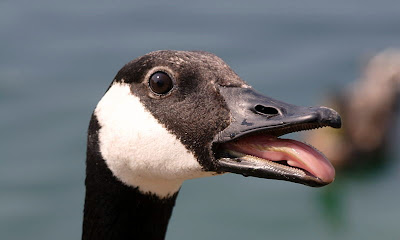 I'm not in Mexico any more.


The rift between Mexico and The States could not be more evident than the tale my brother relayed to me at breakfast this morning.


I headed off to Bend on Friday afternoon.  A nice jaunt through the mountains.  But a trip I made as a passenger.  I could not cajole my mother to put her life into my hands -- or foot, I guess.


We had a leisurely breakfast of eggs benedict at a local eatery.  The D&D.  Once a notorious smoke-filled bar, it has been tarted up to pass as a family restaurant.  In about the same way Las Vegas has become family-friendly.  With a something-is-wrong-here uneasiness.


I always enjoy these outings with my family.  My mother, my brother, his wife, and I were having a great time.  Then the stories began.  And things got better.


My favorite was the gassing of the geese.


Bend, like the D&D, has a checkered past.  In the 1970s, it was still a logging and lumber town.  About as basic as a working American town can be.


Then the tourists found it.  Sunny days.  Snow in the winter.  Majestic purple mountains right out of a patriotic song -- for staring and skiing.  And when urban types discover the joy of quaintly country ambiance, something is going to change.


What changed was Bend.  The town's former a lumber mill is now the city's main shopping mall.  And the 81,000 people are an amalgam of what Bend once was and what it has become.


To attract additional tourists, the city developed a water-front park on the Deschutes River -- Drake Park.  The park is a wonder.  With water.  Trails.  Solitude.  And open-grass.


It attracted tourists.  And Canada Geese.  Geese are usually migratory.  But when they find a deal almost as good as a free Hilton, they put their wandering ways on hold.  Why fly all the way north to breed when you can do it in a park safe from hunters?


Move in, they did.  But geese are not toilet-trained.  Like all birds, they poop whenever and wherever they like.  And being big and flockish, the poop is big and there is lots of it.


I have seen what geese can do to parks.  It is not a pretty site.


The bureaucrats in the park district decided enough was enough.  But they could not execute any plan that would work.


They tried capturing the geese and repatriating them to northern Canada.  Perhaps forgetting that geese are migratory and could get back to Bend almost as fast as their captors.


They tried oiling the goose eggs in the hope the embryos would die and the geese would not lay additional eggs.  The population did not decrease.


Out of frustration, the district devised what one resident, in a perfect application of Godwin's Law, called -- The Final Solution.  Park district employees captured 109 of the unfortunate geese.  Took them to a district shop.  And placed them, individually, into a trash can sized container filled with carbon dioxide until the goose stopped thrashing.


In old Bend, the only question would have been why the district did not simply shoot the geese.  But we live in kinder and gentler times.


New Bend reacted just as any politically correct group of people would do.  They were outraged.  And American outrace these days is best dramatized with a candlelight vigil.


And vigil they did.  By the flames of little candles, they expressed their feelings.  Observed a moment of silence for "the surviving geese companions and families."  And discussed ideas of how to prevent the slaughter from happening again.


The only thing missing was a condemnation of the use of a greenhouse gas to kill the geese.  Uniting us all in this ecological nightmare.


I love animals.  Even geese.  They are doing only what thousands of years of breeding have taught them to do.  Being geese.


But this whole thing is a bit over the top.  And it symbolizes how neurotic American society is becoming.


The first mistake was creating a perfect goose habitat and then shocked -- shocked, I tell you -- that geese would take them up on the invitation.  Golf course and parks were not built for geese, but they provide exactly what geese think they need to be a true goose.


And geese do not mix well with people in those environments.  Too many Americans have bought the Disney view of animals.  "They are just like people."  Well, they aren't.  And you either accept that or you try to change the circumstances.


As for the "executions," these are geese.  We are not talking about rounding up children.  For what it is worth, the meat was donated to the local food banks.


I keep thinking what would have happened in Mexico.  If geese had started congregating in my village, my neighbors would have seen them as a gift from God -- to be harvested and enjoyed.  Candlelight vigils are for the victims of crime.  Not for birds.


And I think they would have it just about right.

Well, of course it is not "fair" to solve the problem like you described it, but - some things have to be done.
Just remember the "rabbit problem" in Australia or the "rat problem" on some islands in the southern Pacific.
Nobody thought of it, but the problem was there.

Candlelight vigils? Some people for shure have too much time on their hands and a strange point of view...you are right, in MX nobody would light a candle for these geese, but the oven instead. ;-)

BTW: Bought a new (used) camera, a Canon 20D DSLR. Boy, that thing is nice. Still like my Pana FZ8, but the Canon clearly is another class...

Bend became very hip when I lived in Ashland for 17 years. At least a section of it. Lots of track stars and chic restaurants - I guess they should have started serving goose or at least Foie gras. ;-)

It is a good time of year to be there in any case.

Similar problem up here a couple of years ago at our favorite lakeside swimming beach and a similar resolution. Our local activists had a catchy name though: "Give Geese a Chance." So why not host a big feast since, according to NYTimes, the flesh tastes "like a dark, tender cut of smoked chicken." Mmmmm, I'd try it. Of course, if I got sick I could always sue.

Good story! Especially the last part, so true, Mexicans would see that as a gift from God. hahahh
And thats why I love it here!

Not so comfy with the fact that they gassed the birds then gave the gassed meat to the Food Bank tho. . .

Poor Geese, 400 degrees for about an hour would solve the problem.... I had a dozen ducks once.....I can just imagine what bigger birds would do...do...

I understand the need to kill the geese. I would think there are more humane ways to do it.
Francisco

Industrialized and suburbanized humans are so very out of touch with the life-and-death situations (including finding one's next meal, deciding what to do about that dying or dead person, and what to do about that group of people who are trying to kill us today), that most of us would perish (or quickly change our tune) if we were thrust into similar conditions today.

"They tried capturing the geese and repatriating them to northern Canada. Perhaps forgetting that geese are migratory and could get back to Bend almost as fast as their captors."

Some might see your story as an allegory for Mexican migration into the US. The irony? "The first mistake was creating a perfect goose habitat and then shocked -- shocked, I tell you -- that geese would take them up on the invitation."
Alee' Robbins, Salem, OR

Hollito -- Good to hear from you again. Congratulations on the new camera. One of these days, we are actually going to get to meet in person.

Theresa -- They are tough birds. A Canada goose at my brother's ranch kept biting one of the horses. The horse responding by kicking the goose. No candlelight vigil there.

Tom -- The tragedy is the geese are going to be staying -- no matter what measures are taken.

Mexican Trailrunner -- The meat should not have been affected by the CO2. In this instance, shooting may have been more humane.

Tancho -- We had a pair of ducks when I was growing up. The mess was amazing.

Francisco -- Decapitating would have been far more efficient than suffocation. The bureaucrats were really ham-fisted on this one.

Felipe -- An Easter egg hidden just for you. Glad you found it.

Al -- Nice to see you here. I wish we had had an opportunity to sit down and chat before last Friday.

Alee' -- I am glad you saw the metaphor. When my brother told me the shipping part of the story, I told him it sounded like the futile efforts of the American government. And just as futile as Bend trying to rid itself of geese. Geese, who now have no fear of people, and think they have gone to goose heaven. Perhaps, everyone in town should come to some sort of agreement. The geese can stay. But hey will be regularly harvested for a periodic goose festival. Perhaps, dining in the park by moonlight.

I remember the old D&D. It and several other fine drinking establishments were on Bond Street. When I was a kid I couldn't remember which was Wall Street and which was Bond Street, my sister suggested calling Bond Street Beer Street and I've never forgotten which was which since. I've shot several geese within a few miles of Drake park. Carpenter

Calypso -- It was a practically perfect time to be there.

Carpenter -- Nice to see a new face. And Bend certainly has a new one from those days. The D&D still has its wall of shame -- patrons excluded for fighting.