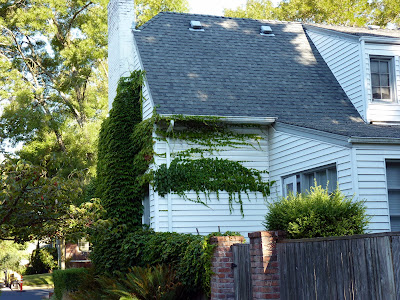 One of my fellow bloggers occasionally chides me about having one foot in Mexico and one foot in Oregon.  He is one of those true believers.  You cannot be luke warm about your home.  Otherwise, you end up like a crazy uncle in the attic.


I thought about his friendly warning yesterday while I was surveying my house in Salem.  Houses are living organisms.  They need as much care and tending as children.  Abandon them, and they will pay you back in the currency of sorrow.


I have not had an opportunity to do much maintenance around the house.  My right ankle limited what I could do outside for the first three months.  Now, my recent injury to my left foot is restricting me.


But enough was enough.  As some school of Greek philosophers must have said.  (I think they said: "moderation in everything."  But I prefer my paraphrase.)  There were several tasks that needed to be done.


A friend picks me up each morning for the quick drive to work.  Even when I was on crutches, while I waited for her arrival, I would pull the random weed.  Almost like some nervous habit.  But, over the past few months, I have slowly reduced the weed invasion on my southern border.


But the weeds were not the largest problem.  I have Boston ivy on my chimney.  Bricks and ivy sound as if they go together.  After all, what would Harvard be without its ivy-covered walls?  The problem is ivy and mortar do not mix well.  The mortar always suffers.


Over the years, I have considered pulling up the entire plant.  I haven't solely for one reason: the ivy gives the house a cottage look.  But only if I keep the ivy under control.


The nice thing about Boston ivy is that is is easy to pull down.  So, when I got home Thursday evening, I decided to prune as much of it as I could with my bare hands.


Without changing out of my Bob Fosse work clothes, I climbed onto a lawn chair and started tugging on the ivy.  Without incident.  What I could reach, I pulled down.  I even avoided the temptation of pulling the ladder out of the garage.  I knew that was a recipe for challenging Newton's theory of gravity.


Because that went so well, I started pulling tendrils of ivy off of the fence.  That stopped real fast.


On the second pull, I looked down at my hand.  My bare right hand.  There was a large (queen-size -- literally) yellow jacket in the process of pumping venom into the back of my hand.


I flipped her off.  But she was not done with me.  I avoided an additional sting by waving her off.


It is moments like this that cause you to start thinking about barn-sized wasp nests in Alabama.


I am not allergic to bee stings.  Or, at least, I don't think I am.  I had a bad reaction to a bee sting on my first night in Melaque last year.  But that appeared to be a combination of being tired and watching far too many transvestites.


Even so, I knew I needed to take care of the sting.  My last episode with a yellow jacket has left one of my fingernails a bit deformed.


Ice is always the first step.  That was easy.  I keep plenty of ice on hand for my lime and Diet Coke concoctions.


Then I started listing the usual home remedies.


Baking soda.  None in the cupboard.  Not even an old box in the refrigerator.  Only baking powder.  And I learned long ago (in a baking accident), they are not the same thing.


Items I would usually have on hand simply were not there.  After all, the place is no longer my primary residence.


And then, I remembered meat tenderizer.  There was a bottle of Adolph's in the back of the cupboard.  Probably over twenty years old.  But it was effective enough to take away the pain.


Yellow jackets are the one thing that make Oregon summers less than perfect.  Well, yellow jackets and mosquitoes.  And the little black and yellow buggers are another difference between Oregon and Melaque.


I do not think I have seen a yellow jacket that far south.  And that is another reason for living in Melaque.  But I suppose, when I have lived there as long as I have lived in Oregon, I will have the equivalent number of scorpion and centipede stings.


It helps remind us that serpents thrive in every paradise.


Even with one foot planted in two worlds.  Both of them are injured.

Must be a northwest thing: crazy uncles in the attic. Where I was raised, we take pride in our crazy spinsters, aunts and uncles, and they are seated amongst us on the front porch. Yellow jackets? Just use tobacco. Pulls the poison out right quick.

Thast is why William Faulkner and Tennessee Williams are far more interesting than Jean Auel.

I wouldn't torment yourself over living in two worlds - It makes the transition to the new one smoother I think; and after all there are a lot of ways to reach the goal.

Lovely house - and quite the ongoing project as you suggest.

I was picturing your project, thought it would end in the removal of house siding boards to which the ivy had clung. But, boy did I ever cringe when I read your vivid description of the bite. I'm allergic myself, swell up something awful, go to the hospital or use my epi-pen. Glad you were spared that.

Calypso -- I would be more than willing to divest myself of the house. But the market is not cooperating. Until then, I will simply tend my garden -- both north and south of the border.

Alee' -- Thank you very much. You would have got a good laugh out of watching me yank on the ivy while dressed in my black work clothes.

Tom -- Last year in Mexico was the first time I felt a potential allergic reaction. But this one was easy. It itches a bit today. But it is not painful. My brother, on the other hand, would have the same reaction you described.

A slice of onion works well on stings too...

Standing on a lawnchair is just plain childish. Obviously, you need a good woman ... to haul out the ladder. ;)

Okay, I must know. What did you do your your left foot?

We just hung up a plastic bag meant for yellow jackets with some substance in it. I guess they get attracted to it and get stuck in the bag. They were living where I hang my clothes, making their home inside the poles that hold the lines up. Everytime I hung clothes up, I'd see them swarming. I'm going to cover those pipes on each end. Careful Steve. Have a great weekend.

"But that appeared to be a combination of being tired and watching far too many transvestites."

Irene -- I certainly was not out to win the safety award of the month. My left foot tale is on its way.

Jane -- But it worked. Except for the yellow jascket. And she did not care whether I was on a lawn chair. Her stinger worked just fine.

Anonymous -- Foot tale on its way.

Gloria -- Thanks for the tip. But she was one of the first I have seen this year.

JoS -- But not the version we learned from Mrs. Metz.