flowers in the mud 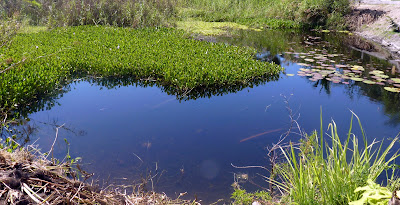 Mexico tugs on me.


Not as the moon tugs the tides. More like yanking on my sleeve.


The latest agent is my land lady. She sent me an email about the summer weather in Melaque. "Warm and beautiful" were his words. Even though she admits the temperature and humidity combined have been the equivalent of 118 degrees.


To be fair, she said it had been "as high as 118." But, after spending a summer in Melaque, words will not convince me that summers in Melaque are preferable to my current Oregon summer.


Not that the thermometer matters that much. I did not move to Mexico for weather.


However, her next piece of information really piqued my interest. She informed me that she, a mutual friend, and my maid have recently spent a good deal of time clearing the laguna outside my back gate.


You may recall that prior to my ankle break, I joined them in trying to pull out some of the water hyacinth choking the laguna. Mother nature (or her more fecund servants) abhor man-made order. Where water hyacinth once reigned, water lilies started growing. You can see the early rangers in the photograph at the top of this post.


Having spent a lot of effort taking on the hyacinths, my three intrepid friends were not going to allow the water lilies to get out of control. It turns out the hyacinths were easier to harvest. They float on the surface. The lilies are rooted. When they set up housekeeping, they will yield only if yanked up.


I described the three as intrepid for a good reason. To remove the lilies, they need to be in the water up to their waists.


You may recall the laguna is home not only to weed-pulling humans and birds. We have crocodiles. In particular, there is a young fellow who hangs out on the bank of the cleared area. And a tale resides there, as well.

Let me relay the story as it was told to me:

Last week we were in and I saw the small croc swimming our way, but it was okay as a thrown rock scared him away. We are staying more alert now, as it appears he is becoming familiar with us and is not so scared now.


I ask you. Would you dare play poker with the three of them?


Just reading her story made me want to be back in Mexico. Standing waist-deep in the mud in my best Johhny Weismuller stance -- defying the crocodile in his own element.


It was adventure that drew me to Mexico. And, apparently, it is waiting for me just outside my gate.

I would have to make my own adventure in the US if I had to be away for so long...but it isn't the same. Mexico always calls me back.

How about a heavy duty rod and reel and 50lb. fishing line with large treble hooks...I promise you'll get all the weeds and lilys you can handle. Standing on the bank you can see the predators coming.
Francisco

I came to Mexico in part for the weather - in spite of the summer heat - are you sure you didn't too?

Take your hot tub to Mexico - only one shark in those waters.

Francisco -- But where is the adventure in that? I doubt I would get near the water myself. That croc is quite a swimmer. Even if he is small.

Calypso -- Ouch! I may need to start wearing a fin.

"Warm and beautiful" were his words.

Anonymous -- Thank you very much.