city on the bluff

Let’s see.  Where did we leave off?


Ah, yes.  The founder of the Purépecha empire, Tariácuari, died.  Leaving his kingdom divided.  Pátzcuaro to his son, Hiquingare.  Ihuatzio to his nephew, Hiripan.  And Tzintzuntzan to his other nephew, Tanganxoan.


As we saw yesterday, Hiripan was BMOL – big man on the lake.  Ihuatzio was the center of aggrandized power.  Briefly.


But all glory is fleeting.  Hiripan’s power faded, just as Tanganxoan’s power grew in the early 1400s.  When the Spanish arrived in 1520s, Tzintzuntzan was the administrative, political, and religious capital of the third largest empire in Mexico.


This was my second visit to Tzintzuntzan.  I was here last February.  But that was with a bus tour, and I felt a bit rushed.  This time I took my time.


Ihuatzio relies on man-made structures to create its splendors.  The founders of Tzintzuntzan effectively used a natural setting to enhance their buildings.

The ceremonial part of the city is built on a bluff and forms a great platform for the buildings.  Looking very much like the Acropolis in Athens.  It must have been a stunning sight to the Spanish.


When the Spanish arrived, the city had a population of 100,000 – making it larger than many of Europe’s major cities at the time.  Most of the site has not been restored.  But the portion that has gives a good feel for what life must have been like on those heights above Lake Pátzcuaro. 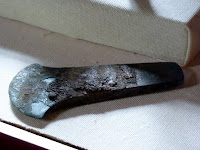 The site has a very small museum showing some of the implements uncovered in the ruins.  Pottery.  Spear points.  Jewelry.  And metal tools.  Of both a martial and domestic type -- though the distinction is hard to make.  An ax that cuts wood can smash skulls just as easily.


On both visits, I was immediately struck with the natural beauty of the site.  It has a sweeping view of the eastern end of Lake Pátzcuaro tucked between mountains that were the natural allies of the Purépecha.  On this visit, I sat down and simply enjoyed my surroundings.

The star attractions of the platform are five structures called yacatas.  They are not really pyramids, but they served the same purpose.  Places to worship the gods and to bury the exalted.  The Vatican meets Forest Lawn.


The five yacatas are built side by side.  The exterior was completed with large blocks of black basalt fitted together without mortar.


The fact that they were built without mortar is unusual.  The only other American Indian culture that accomplished that feat were the Incas in Peru.  And there has been some interesting speculation about a possible Peruvian connection.


But the structures themselves interest me.  They are rectangular with a semi-circle on the west side of each.  In form, they look a lot like an outline of the White House.  No connection.  Just another of my wandering metaphors.

Each yacata had a wooden structure on top that acted as a temple -- including one dedicated to one of their long-departed kings who was worshipped as a god.  None of those structures has survived.


But the yacatas are not the only sights to see.


On the north end of the great platform is a building named the Palace.  It probably was never a palace in the sense we use that term.  But it definitely did provide housing. 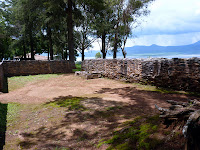 The building consists of a group of rooms built around a courtyard.  It also included a collection of human bones.

The assumption is that the building was a storage place for the remains of defeated enemies.  A place where the Purépecha could display the physical manifestation of their military power over theose who opposed the empire.


There is another building on the site that has caused a good deal of speculation.  It is a series of rooms in an L-shape.  The majority view is that it was a storage site for the wealthy. 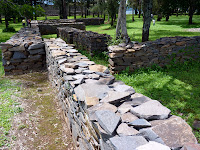 The problem with that theory is that archaeologists have not been able to discover any entrance points.


When Tanganxoan was placed in charge of Tzintzuntzan, the city was already there.  He did not found it.  The city is built on earlier versions as old as 900 AD.  For example, the yacatas are built on older similar structures.


But it all came to an end in 1522 when the Spanish tribe showed up and took over -- well, everything.


Like some circular tale, the political power reverted to Pátzcuaro.  But the religious center, this time in the form of the Roman church, remained in Tzintzuntzan.


And here we will once again meet our old friend, Don Vasco.  But that is a story for tomorrow.  When we will visit modern Tzintzuntzan.

Thank you again. This is better than reading a history book.

I apprciate the history lesson and all the pictures.  Thank you for all the time you have put into these presentations.

I thank you, too.

Well Done!  You need to settle down and teach Gringos history of the region.

I am truly beginning to appreciate the lake and its surroundings.  Including its history.

Settling down is the last thing on my agenda these days.  Like a shark, I need to stay in motion.

As you know, next to flags, history was one of my first interests.  It is fun to share.

You are most welcome.  It is a fun project for me.