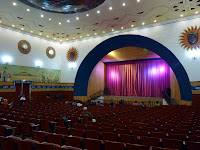 What can I say about a day that starts with a group of expatriate men chewing the fat and eggs at breakfast; then lunching with my inestimable hosts; and ending the day with a dash of culture?


Each Tuesday morning some of the expatriate men (R.O.M.E.O.) get together for breakfast at a rotating list of restaurants.  Solely for fellow-ship.


They have been extremely kind in letting me join in -- just as if I lived in town.  In fact, they have made me feel as if I was one of the group.  When I run into one of them, now and then, during my days out, they act as subtle anchors for this stranger in a strange land.


I do not need a lot of social interaction.  But I need some.  And they have helped to provide it.


As attractive as Pátzcuaro is, without the acquaintances I have made, it would not have made the impact on me that it has.  I guess that is obvious from my posts of the last two weeks. 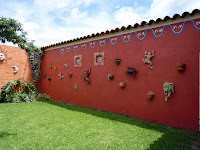 But the biggest impact of this trip to Pátzcuaro has come from my hosts, Felipe and the good Lady Zapata.

I had lunch with them on Tuesday afternoon.  Along with an American couple who has lived in Pátzcuaro and San Pancho for many years.  I was not the least bit surprised they know my friends, John and Trish, in Barra de Navidad.


You have read Felipe’s rave notices of his wife’s cooking and baking.  He did not exaggerate.  She cooked up a pot of pozole that had to be the best I have ever eaten.  And then hit a home run with a corn cake dessert.


The true joy of the afternoon was to sit on the famous patio and chat about politics, Mexico, and the sense of just being alive.  I could have spent the rest of the day there.


But there was culture to be had.  Earlier in the week I noticed posters that a flamenco group was going to perform at the local theater on Tuesday evening.


The Emperador Theater is a pleasant venue.  It was the cinema for many years.  It now acts as the type of multi-event theater that were once popular in The States.  Pull up the screen and you have an adequate stage for touring companies. 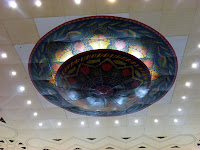 The side walls are painted with borders of local activities -- including a running school  of the lake’s famous whitefish.  The ceiling has an interesting reverse dome that looks far better than my photograph.  As if ET is returning home.


For Tuesday, the touring company was a flamenco group from Zacatecas.  And they were fine for the limitations placed on them by the performance space.


Six dancers.  A guitarist.  A percussionist.  A singer.


Flamenco is tricky to perform and present.  It has become so stylized that it runs the danger of being a parody of itself.


But this group found an adequate line between stage performance and the raw roots of the dance that may have come to us through the Moors.  One reason the dance is such a full body exhibition -- hands, feet, legs, arms, head; all akimbo and in motion.  With the face frozen in that look beautiful women use to deter the approach of lesser mortals.

The singer was the ever-present star of the show.  Flamenca songs have a tonality similar to the New Age music of Cirque du Soleil performances.  She did an excellent job of reminding the audience that the flamenco masks strong emotion.


Flamenco is like a dark chocolate torte.  It can be overwhelming in large quantities.  The company mixed in some modern steps (a very clever number using rhythm boxes) and added just a bit of what disco would look like through a flamenco dancer’s eyes.


My sole complaint goes to the heart of the whole production.  Flamenco is a very personal and intricate dance.  The focus should be on either one dancer or a pair of dancers.  A full company on a large stage loses the intimacy that is at the heart of the dance.


I experienced my first flamenco performed by an old gypsy woman in a cave outside of Cordoba.  All performances I have seen subsequently fade in comparison.


At about an hour and a half, it was just about the right measure for an audience that thoroughly appreciated that this group of strangers would stop by to share of slice of Spanish culture with them.


And I was happy to dance through this day -- knowing that I have another two weeks to enjoy myself.
at August 17, 2011

I knew that you, like I, were getting on in years, but cave dancing? Tsk, you are really dating yourself! Cheers!
Dan in SMA

My wife's uncle owned that theater for many years. I suspect you did not catch the announcement last night, but a renovation is planned. I hope they put more space between the rows of seats so that I fit better.

She brought her own club and furs.

Even with my Stubby Kaye legs, it was a tight squeeze.

We have often gently crtiqued inferior restaurants with "Well, it has a great view."

Steve, can you recall the name of the last restaurant where you ate with the R.O.M.E.O.s? Did it serve a table salsa?

We ate at La Surtidora.  I cannot recall if there was a table salsa because I had a great mole on my eggs.