to a dwindling few 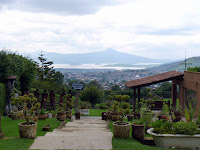 Even though my time in Pátzcuaro is winding down, there is still plenty to see and do.


And Monday was a day to combine a number of events.


You may recall I met my blogger pal Todd for the first time in person while I was in San Miguel.  Today I had the pleasure of meeting his wife, Shannon.

They are in the process of moving from Pátzcuaro to San Miguel.  But they both took time out from their busy schedules to accept my lunch invitation.


They picked the place.  And quite a place it was.  Rancho la Mesa.  With a stunning view of Pátzcuaro.  Even though the day was a bit cool and overcast.


There was nothing amiss with the conversation, though.  They gave me some very good insight into life in both Pátzcuaro and San Miguel -- some I had experienced myself.


I first met Todd through his blog.  He lived in a neighborhood development (Corazon de Durazno) in the hills above Pátzcuaro.  I had been looking at a home in the area, and I was interested in a resident's viewpoint.


I never bought the house, but I did become acquainted with Todd and his various hummingbird, rabbit, and cat adventures. 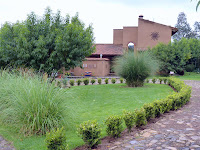 After four years, I finally decided to see the neighborhood that once interested me.  So, up into the hills I drove.


As I drove around the neighborhood, I had a certain sense of ease.  Probably from all of the photographs and maps I have viewed, I simply had that peace of familiarity.


And I quickly discovered the neighborhood has a well-deserved reputation for friendliness.  The renters above the house I once wanted to buy came out to say hello.  And when I stopped to take some photographs, another neighbor came out to talk.  Amazingly, her recognized me from my blog.


After living in town for the last month, the drive to the neighborhood seemed like a long trek.  I think I made the correct decision to not buy.


During my first week here, Felipe took me on a quick drive to show me two interesting villages.  I decided to do an encore today -- now that I have a rather good sense of where the local roads lead.


One of the things I really like about this lake area is the ability to get on a road and end up in interesting countryside.  When I lived in England, I would often get in the car and head down hedgerow lanes to discover new villages.  I almost feel as if I am living that experience in Pátzcuaro. 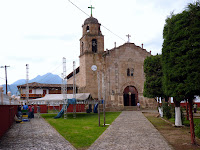 The first village, Cuanajo, is well-known for its furniture shops.  When I drove through with Felipe, I was surprised at the varied quality of the pieces.  Some were quite nice.  Others were, well, not quite as nice.


When I went back on Monday, I fully intended to take some photographs to illustrate that point.  But I didn't stop at any of the shops.  In truth, furniture shopping (or shopping, in general) is just not one of my big interests.


What distracted me was a stage being constructed in the courtyard of the local church.  I also noticed that a couple buildings on the town square are being rebuilt.


For what?  No idea.  But I kicked into guy gear while watching the men construct their stage next to the church.  I even forgot to ask them what the occasion was.


But I think I may have made up for it at my next stop.  The village of  Tupátaro.  Felipe made a point of showing me the village church.  The building is from the colonial era, but it did not strike me as unusual -- until he pointed out the ceiling. 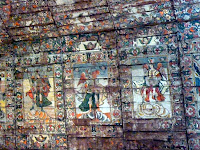 The ceiling is not plastered.  It is wood planks.  And each plank is painted with intricate portraits or designs.  The entire ceiling.  Down the entire nave.  Almost like stained glass on wood.


When I was with Felipe, I wanted a photograph of that ceiling.  But a sign clearly stated that no photographs are allowed.


When I returned on Monday, I was prepared to ask the woman watching the church if I could take photographs without using my flash.  But I did not need to put both of us in that uncomfortable position.


Just as I arrived, two Mexican men were talking with her.  She turned on some low wattage lights, and the men started taking photographs with their camera phones.


I asked her if I could use my camera.  She nodded yes.


Without doubt, I was simply fortunate.  In the right place at the right time.  If she had not turned on the lights, even my great camera would not have picked up the subtle colors in the dark.

Boy, talk about luck. Can't believe that you got that ceiling shot so easily.

No Santa Clara de Cobre for this trip?

And so openly.  Without offending a soul.

I was going to do that today.  But circumstances have intervened.  Felipe took me up there during the same trip I discussed here.  We will see if I can fit it in tomorrow.  Along with my Costco trip.  That means I may forgo Superama.

The church ceiling is fantastic.  Glad you were allowed to take a picture and thank you for sharing.

It was a very nice coincidence.