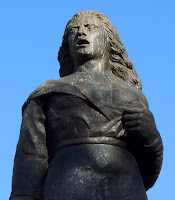 
Unless you live in Pátzcuaro or have an appreciation for Mexican Independence history, the name probably does not sound familiar.

And in the middle of the eponymous square is a statue of her -- looking just like her national myth.  A perfect example of Socialist Realism.  A defiant, heroic woman.  A heroine.  A secular Mary.


Even though it does turn a woman of substance into a substantial woman.  But who is going to follow Kate Moss in overthrowing the Spanish? 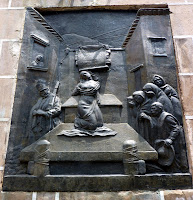 For all we know, she may have been a substantial woman.Like all subjects of heroic myths, finding the true Gertrudis is difficult.  But that is what I set out to do.


I wanted to get past the saint, the feminist, the egalitarian, the political martyr.  There had to be a real woman under those layered labels.


We know some basic facts about her.  She was born in Pátzcuaro in 1765 into a relatively wealthy Spanish family with a home on La Plaza Grande.  The home is still there -- as a hotel. 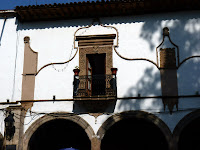 But the myth-building began young.  At an early age, she was standing on the balcony of her home and saw a mob beating a beggar in the plaza.  She cried out, but the mob ignored the little girl, who cried tears of saintly compassion.


Young women in Mexico, not even of Gertruduis’s class, had education expectations.  Their goal in life was not to be well-educated, but well-married.  Not our feminist heroine.  She was a voracious reader and took a great interest in the Enlightenment authors -- and the American and French Revolutions.


Such an interest that when she was courted by Pedro Advícula Lazo de la Vega, a handsome young second lieutenant in the Spanish army, she told him that she could not marry anyone in the service of Mexico’s oppressors.


A little side note might help here.  Pedro was a criollo.  A person of Spanish ancestry born in Mexico.  The Spanish Bourbon monarchy wanted to ensure its control directly over Mexico.  As a result, the Crown almost exclusively appointed people born in Spain to its administrative offices.


The only way for a criollo to gain social advancement was in the Spanish army.  Gertrudis was effectively asking Pedro to give up his life career for her.  But he loved her enough, he resigned his commission.

But that was only the first hurdle.  Gertrudis’s father then refused to allow the marriage because Pedro’s complexion and hair were too dark.  But Gertrudis would have nothing to do with such prejudice and insisted on marrying him.  Copies of their letters are currently on display in the Museum of Popular Art.


It was a productive marriage -- producing three daughters and four sons, and a rather successful business career for Pedro.


When the War for Independence broke out in 1810, Pedro and the couple's oldest son, Manuel, joined the insurgency as guerrilla fighters when the first battles went badly for the Americans, as they called themselves.


While they were in the hills, Gertrudis allowed her home to be used as insurgency central.  She raised funds, collected food, and picked up bits of intelligence.  She was a messenger between the insurgency groups.  Even after Pedro and Manuel died in battle, Gertrudis kept up her work.

And dangerous work it was.  The insurgents killed Spanish soldiers and sympathizers.  The Spanish responded in kind.  All the time, Gertrudis was under suspicion.  But she worked on until 1817.


But, as most Mexican tales of heroism end, this one took a very tragic twist.  Gertrudis had once saved a retired soldier from the gallows.  She trusted him enough to guard her home while she was gone.  When she returned, some valuables were missing.  She questioned him.  In turn, he ratted her out to the Spanish.


And, in a scene that could only come out of Hollywood, Gertrudis was entertaining guests in her home at a chess party when the Spanish arrested her in front of her guests.  They then whisked her off to 14 Calle Ibarra, a house that still stands, where she was jailed and tortured for information. 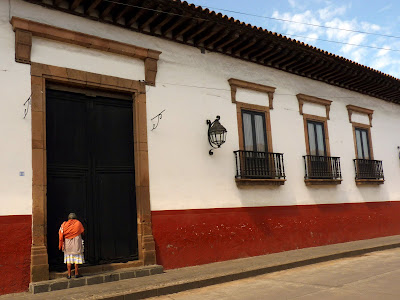 The order for execution was summary.  On October 10,1817, a military guard took her to a small plaza near the San Francisco church where she was allowed to pray. 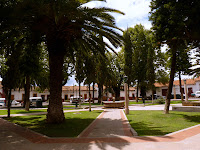 The execution squad intended to execute her there on a prepared gallows in the small plaza.  But the officer in charge changed the site to the Plaza Grande in front of the jail -- as an example to the other incarcerated rebels.


And this is where fact and myth intertwine.  The story is that the squad attempted to tie her to an ash tree in the plaza, but she protested so much at the humiliation of being trussed up, they left her standing front of the tree.  The trunk of the ash tree is preserved like a relic.


She gave her gold watch, hair comb, and shawl to the official in charge for her three daughters.  And then threw a gold peso at the firing squad saying: “Here’s all I have left.” 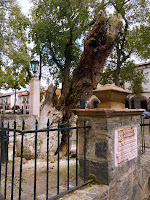 Having divested herself of her worldly goods in saintly fashion, the little girl, who had cried over injustice in the Plaza Grande, stood as an heroic 52-year old woman and started inciting the crowd.


If this was an American tale, the crowd would have overpowered the guards and saved Gertrudis from certain death.  But it is not.  It is a Mexican tale.


The soldiers dispersed the crowd, and with a singly volley, she died.


But the Spanish were not done creating a legend.  They left her body in the plaza for a day.  Her body was then taken away by her family. 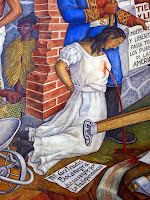 Or so the tale goes.  I spent three weeks reading, researching, and asking locals where her body is buried.  No one seems to know.  Nor was it a question that seemed to bother them.  Perhaps in the same way that no Catholic asks where Mary is buried.


I cannot say I ever found the true Gertrudis Bocanegra.  Too much time has passed for her to be anything but what she has become -- a Martyr to the Cause of Independence.

An excellent history lesson, Señor Cotton. I knew some of this stuff. Some I did not. Well crafted and illustrated. A Gold Star for your forehead.

I guess I'm going to echo Felipe. Thanks for doing the research and sharing this history, Steve. I'd gathered a little of it on visits to Patzcuaro, but nothing like the full story.

Wow, you must continue  your research into local legend and lore! Your postings on local color have been extremely informative. I can't wait to impress our next house guest if they ever ask me about Gertrudis.....now I will know and offer your knowledgeable information.

I too had learned a little about Gertrudis on visits to Patzcuaro but nothing in this detail.  I'm really enjoying your history lessons, thank you!

A poster child for the argument of letting the ladies serve in combat units. Nice history essay, Mr. Cotton,  about a person I had not heard of before.

Just a side note, no Catholic asks where Mary is buried because according to teaching, Mary was taken up body and soul to heaven.

And I have enjoyed writing them.  It gives me an opportunity to learn a bit more about the places i visit.

If you do, be certain to ask if they have any idea where her elusive body ended up.  A cashier told me last night that the Spanish burned her body.  But she also thought that was the way Gertrudis died -- tied to the ash tree in the plaza.

You are welcome.  Certainly you have similar heroes in your area.  Sorry, areas.

Isn't that point of every day?  To learn something new.

And you know just how long it took me to pull it together.

There are still pieces of her story out there, though.  Maybe I will pull the rest of together on a future visit -- including her life in Morelia.

I suspect she would have made a terrible soldier. She was not a woman to follow orders. But she was a force to be reckoned with.

Kim G
Boston, MA
Where we can only imagine how hard all of that research was in broken Spanish.  Kudos!

But worth the effort.