raindrops keep falling on my -- well, you know 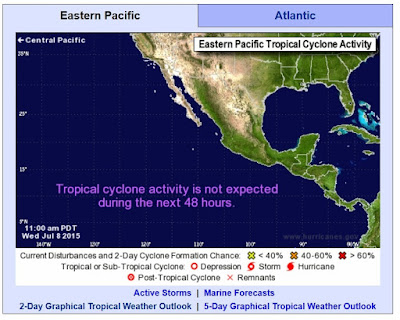 The great rain debate is on.

Each summer I have spent here, a major point of contention, in any expatriate watering hole, is the rain.  Weather, of course, is the grease that keeps the small chat machine running -- to keep us from venturing into politics, and killing one another.

But our weather talk tends to get narrowed down this year to two parties: The Rain Is Late This Summer party, and It Never Starts This Early party.  Both groups are at each other's throats like Shias and Sunnis at a Ramadan midnight buffet.

Here we are in the second week of July, and, other than the inches we received from the hurricane Carlos spinoff, our spring and early summer have been almost bone dry.  We have had a couple of nearly dry thunderstorms with a few teasing drops.  But that has been it.

The hurricane season here started with three major Pacific storms right out of the chute.  Since then, the National Hurricane Center has been displaying the image you see at the top of this essay.  And that is fine with me.

But I am a big summer rain fan.  When I first came to Melaque, we could expect a nice rain storm every three or four days.  And they made us happy.  The rain would drive down both the temperature and the humidity -- for a bit.  I would join my neighbors in the street as we let the cooling rain shower over us.

I tend to be a member of the rain-should-have-started party.  My memory is that we would start getting rains in June.  But my memory has been challenged (and supported) more than once amongst my fellow expatriates.

Maybe it is the heat.  Maybe it is the bad social lessons we have learned recently from political discourse.  But what should be a good-natured exchange of ideas almost instantly turns into a series of ad hominem jumping jacks.

The worst is when someone tosses out "global warning" as the only cause for the odd weather -- if it is odd.  If the other person ripostes with the observation that scientists are unable to attribute global warning to any particular weather event, the inevitable response will be: "You are a denier."

How did that happen?  Weather has now joined the list of discussions that can be terminated with a single magic word -- such as the conversation suicide bomber appellations "racist" and "fascist."  Once either of them (or both) are in play, the conversation is over.

Well, our great rain debate may now be moot -- or, at least, we can wander off into new fields to fight our duels.  Yesterday afternoon, we got some rain.  And I mean just "some."  I doubt most of the local rain gauges will report more than an inch.  But it is rain. 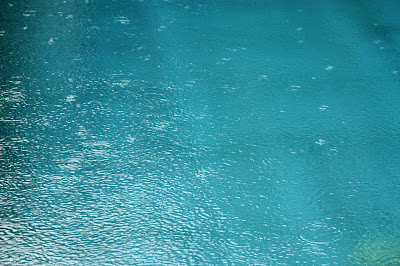 The highlands of Mexico (especially Guadalajara, just four hours away) has been getting what we coasters would call "the benefit of rain" -- maybe even our rain.  Though, I doubt the Tapatios, like Charles, would agree.  Their streets have occasionally been flooded.

Having a small rain has been beneficial, though.  It gave me an opportunity to diagnosis two almost-clogged drains.  A quick clean out and we are ready to take on the worst that nature can give us.

Maybe we can now start arguing about whether the waves are louder this month than last month.

I promised no more Amazon essays.  So, I will do a postscript.

My replacement book for the damaged Truman biography (another amazon trip) showed up today.  Even though I gave my post office box as the delivery address, I received a call on my mobile telephone from the courier in the late afternoon asking for my address.  I asked if he could drop it at the post office, but he said he was within three blocks "of my telephone."

I thought that was an odd response.  But I gave him the address.  One reason I have not used my address for delivery is that none of the streets in my neighborhood are signed.

He pulled up in his little delivery van a few minutes later, and I signed for the new book.  I never did ask him how he knew I lived in the neighborhood -- if he didn't have my address.  But I think I know how.

My GPS function is activated on my telephone.  I know that Facebook friends can see the location of the writer or poster.  I suppose the courier has a similar application on his telephone.

I also re-learned an old lesson.  Even though all of the circumstances in one event seem almost identical to another, do not necessarily expect the same result in Mexico.

I still do not know why the package did not get delivered to my post office box.  But it got to me.  And that is what matters.  We will see what happens to my next order -- that just left The States yesterday afternoon on its way to Guadalajara.