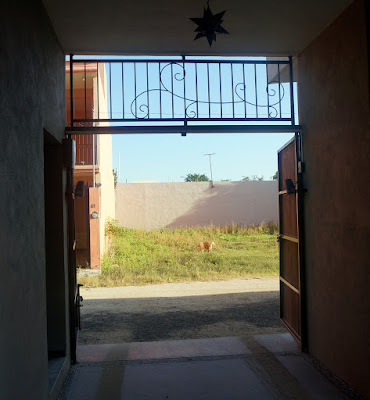 Yesterday, I started writing an essay about Barco. The sky was dark. Real dark. Like a sky from the set of Die Walküre. And then it started to rain.

Considering my topic (Barco's death), my natural impulse was to fall back on kleptomania and steal from The Bard: "A glooming peace this morning with it brings;/ The sun, for sorrow, will not show his head."

But I could not write anything further. And I now know why this morning. I was still wallowing in self-pity about not having Barco in my life. In your comments, several of you reminded me I should be focusing on what he gave me. And there I was weeping over a corpse when I could have been celebrating who Barco really was.

I owned Barco for nine months. Of course, "owning" was my perspective. As far as he was concerned, he was the prince of the palace, and I was, at best, his majordomo.

I tried to train him. He learned his lessons quickly, but he also learned that not obeying them was far more enjoyable. His intransigence always trumped my insistence.

In his time here, I quickly learned he was teaching me some very important lessons -- far more important than "come," "stay," "eat." Here are a few.

1. Being cute with a beguiling smile will get anything (almost) from anyone (almost).

OK. This is one of those lessons we learned from each other. There is a good reason I like golden retrievers; they are every bit as manipulative in personal relationship as am I.

2. Everyone you meet is a friend.

Barco was the Will Rogers of dogs. You know: all that "a stranger is just a friend I haven't met yet" nonsense. But he lived by that creed. No matter how intimidating the dog or how standoffish the person, he insisted they were about to be his best friend.

Especially children. Most Mexican adults were wary of him because of his size. But children could see he was one of them. They all commented on the softness of his ears. He just smiled and wiggled his way into their hearts.

Barco never fully outgrew his puppy stage. Puppies, by nature, are narcissists. The world revolve around them.

As far as Barco was concerned, everyone who came to the house (Dora, the pool guy, the air conditioner installers) were greeted as if they were the best things in life. And he usually led them around with their hand in his mouth to be shown all of his wonders.

The dogs that belong to my neighbors live primarily on the street. And they all have their territory that they defend.

Barco never caught on to those rules. He was friends with all of the dogs -- no matter their gang colors. He would run with one group of friends into the territory of another group.

I would like to say, he taught them all to be friends. That didn't happen. Instead, there were some pretty nasty fights. And he never seemed to understand why.

4. No matter how many times you have done something, it is always new.

Some people call this "living in the moment." For dogs, it is something quite else. For Barco, it was universal optimism. Each crab was the best crab he had ever chased. Each lizard the best he had ever tasted. Every walk was an adventure -- even if we had just been there three hours before.

I insist on variety in my life. Barco found the variety in the moment. Of course, that may be a lot easier when you experience the world primarily through your nose.

5. Circumstances may change, but presence makes the difference.

I first learned that line in a sermon decades ago. But Barco taught me how true it is.

Barco and I shared a lot of good and bad experiences during our time together. We both had our moods. But we were always there for one another when we needed the other. And we knew we were always pals despite what was affecting us that day.

Barco led a good life. Let's be honest: he was spoiled. He was never very good at waiting for what he wanted.

In the morning, after I gave him his breakfast, I would start picking up the leaves and flowers that had fallen in the courtyard. I would never have the task done by the time Barco finished eating.

He had the same routine, he would walk over and nudge my hand with his nose -- letting me know he was ready for his walk. If I didn't get the hint, and I often didn't, he would grab his leash and press it against my hand. If that didn't work, he would walk to the front door and start hitting it with the leash. I gave in at that point.

He was just as persistent when it came to anything chewable -- plastic, coins, peso notes. I would put them as far out of the way as I could. But, as he grew, he found ways to counter my defenses.

7. Grudges are for cats.

As spoiled as he was, Barco did not always get his way. If he had been recalcitrant on our walks, I would occasionally withhold a treat.

He always looked hurt. But, within minutes, he had for gotten about it. And he was living in that moment rather than plotting some form of feline revenge.

That is my first memory of Barco. When I brought him home, he immediately adopted the place as his own.

And, from that day on, my courtyard was a place of wonder -- for Barco and me. His favorite game was to chase the shadows of the flying creatures that inhabited our little garden. He could run almost endlessly in attempting to chase down the most ethereal of prey.

Dogs crave our attention. I suspect that is because they are so full of unconditional love, they know how it feels when being given and being received.

Barco was just getting out of his puppy stage and was starting to be more of a love giver. Time prevented him from perfecting the art. But I will cherish those moments when he would stare into my eyes as if saying: "Thank you for loving me. I love you just as much."

When I bought my house in Barra, the first thing I said was I could not have a dog here. It is all concrete courtyard and tiled terraces. There is no grass. No garden.

But I was wrong. Barco adapted to the place with no trouble.

To a degree. He still hated the doors that divided him from all of his goat, dog, and human friends on the other side of the wall.

He bided his time until one of us would leave the door ajar. He would be gone in a flash -- usually returning in a short time. Often with dog friends in tow. Once with a chicken in his mouth.

He knew that every obstacle was an opportunity just waiting to happen. And he had the patience to wait.

And twice, he took matters int his own mouth by stealing the automatic garage door opener. He chewed on it until the door opened. And then he was gone.

Of course, I learned and shared many more lessons with him. Even though he was with me for only a brief time, he was a puppy. Everything was concentrated. Immediate. For that reason alone, I have no right to feel any self-pity. I am much richer for having known him.

While Barco was in the clinic, I pulled out a CD I had not listened to in a year or so. Jason Robert Brown's Parade.

One song struck me with its poignancy. A young man is describing his memories of a murdered girl he knew.

Did you ever hear her laugh?
When she laughed, you swore you'd never cry again.
Did you ever see her smile?
Her smile was like a glass of lemonade.

The words certainly do not apply to Barco. But their underlying meaning do. My little guy brought a lot into my life -- layering it with his peculiar wisdom.

Seven years ago, I wrote a similar remembrance of Professor Jiggs (my best friend). It was not until I looked at the dates of Jiggs's life that I realized Barco was born on the same day Jiggs died -- just six years later.

The numbers mean little. But they are symbolic of how these amazing creatures cycle in and out of my life.

Today, I can only thank Barco for what he meant to me -- and to tell him I will miss him. 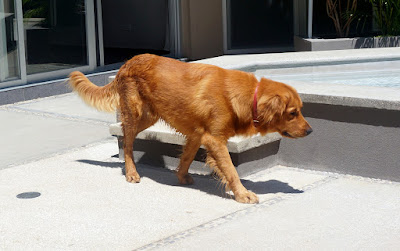