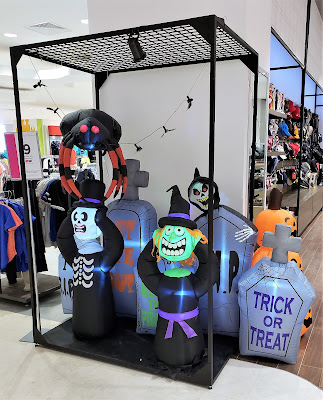 Not the day itself. Halloween has haunted the nights of 31 October since our pagan fur-clad Celtic ancestors danced around bonfires on Samhain.

What comes earlier is the merchandising of the holiday. That is quite understandable in The States. It is the second most lucrative holiday -- Christmas, of course, being the most expensive. Last year, Americans spent the equivalent of $86.13 per person to dress up in costumes that cause apoplexy amongst the cultural police.

It makes sense for stores to cash in early on those open wallets. And they do.

Mexico is no exception. Earlier in the month, I visited the Antea shopping center in Querétaro (another reason people might like san miguel de allende). One of my stops was Liverpool. A department store I would compare to the old Macy's. Slightly upscale without being flashy. I had stopped there to shop for furniture. For the library, in particular. I found four pieces that would fit perfectly.

But I decided to look for other candidates. Thoughts of another sofa were pushed out of my head when I turned around.

I have seen Halloween displays in Mexico before. Soriana, La Comer, and Walmart in Manzanillo always have piles and racks of costumes for children.

But this was different. It was a stand-alone display heralding the arrival of Halloween. Complete with a blow-up tombstone emblazoned with "Trick or Treat." There was no attempt at an Hegelian synthesis with the Day/Night of the Dead celebration. It was unadulterated Halloween. As pure as anything you would find in Boston. Or Rapid City.

I am not one of those expatriates that goes all weak-kneed when I see another culture's tradition being absorbed into another. Probably because I grew up in the United States which is one big pottage of various parts of the world's cultures. Immigrants bring their culture with them. America absorbs it.

About a month ago, Omar's best friend, Lupe, told me he did not like "American" food. I am not certain if I had ever thought about it before, but his use of the term confused me. I asked him what he meant because I had no idea what "American" food was.

I started laughing. "Lupe, those are Italian foods. Not American."

He then listed a number of other European or Asian foods. I gave him a similar answer.

Of course, all of the foods he mentioned have morphed in American hands. But, with the exception of hot dogs and hamburgers (and both of those are arguably European), I am not certain there is such a thing as American food. Most of it came from elsewhere.

Mexico is also a cultural sponge. People bring other traditions here, and Mexicans pick what they like and make it their own.

The appearance of Halloween items in Mexico is fraught with irony. The purists bemoan the appearance of jack-o-lanterns (just as they hated the absorption of Santa Claus and the Easter bunny), fearing that it will somehow hamper the great Indian tradition of Day/Night of the Dead.

The only problem with that position is its premise. It is true that some pre-Columbian tribes in Mexico had an annual tradition of sitting and visiting with their dead. But it was regional, not throughout all of Mesoamerica. And not all the tribes celebrated on the same day.

Then, the Spanish showed up. The priests, who were an integral component of the conquest, decided to put an end to the pagan practice -- but in a very Roman Catholic way.

The church had already winked at the resurrection of the Aztec goddess Tonantzin as Our Lady of Guadalupe, so, the solution was simple and elegant. The Purépecha around Lake Pátzcuaro were one of the tribes that regularly practiced the annual dead veneration.

Rather than attempt to outlaw the practice, the church squeezed the custom through the Catholic sausage grinder by conducting a hostile takeover requiring all the tribes to celebrate on a day of the church's choosing. The date was easy. Because the tribes were honoring the dead, the church would slip it into another day honoring the dead -- All Saints' Day.

Not being content with that bit of cultural appropriation, the church also required that all altars must contain at least one Catholic religious symbol. The rest could be made up of as many pagan pieces as the tribes cared to use. If a Purépecha warrior from 1520 were to wander into the cemetery at Tzurumutaro this year during the celebration, he would certainly recognize what was happening, even though the date and Christian iconography might confuse him.

It was not until the 1960s that the Mexican Minister of Education declared Day/Night of the Dead would be an all-Mexico tradition, and that it would be taught in the schools to perpetuate its celebration.

Like most top-down edicts in Mexico, it worked only where the tradition was celebrated. There are plenty of places in Mexico -- especially the north -- where any celebration of the day is so low key as to be almost invisible. Someone looking for a Coco experience in Monterrey would be sorely disappointed.

My advice to the people who are standing in the road of the hobgoblin of history and yelling "stop" is to step aside before you are run down. Day/Night of the Dead has survived the nips and tucks of the Roman Catholic church. I would not be surprised to see Mexico incorporate some Halloween elements in their celebration. When the school kids build their altars in the San Patricio square, they almost always manage to work in some sort of Halloween item.

And they are not wrong in doing that. Remember the pagan Celtic holiday of Samhain? For some of us, that is our ancestral heritage, and the Catholic church did to it what it did to the Day/Night of the Dead. It turned the day into All Hallow's Eve (thus, Halloween) -- or, as we know it in this context: All Saint's Eve.

And that is why Halloween and Day/Night of the Dead are celebrated at the same time of the year. The Celtic and Mexican tribes both lost their tradition to the Catholic church -- and, each in their own way, has retained it.

And if that bothers some people, we may just have to stop calling our little village San Patricio. I am certain that the missionary to the Celtics, who adopted him as their patron saint, would appreciate the irony.


Oh, just in case you are curious, my Halloween costume this year will be that of a retired Oregon attorney who writes essays and lives in Mexico permanently. I bet you will not even recognize me.