indiana steve and the hidden dome 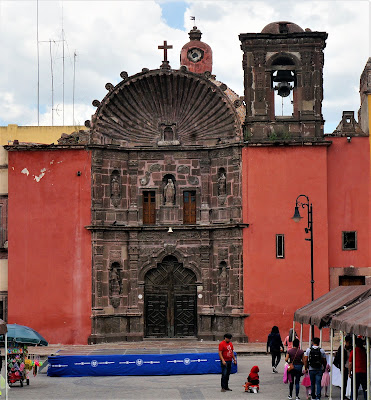 If you want to shoot architecture photographs, San Miguel is a target rich environment.

Due to its near-death experience, the city has some of the best-preserved colonial architecture in Mexico. Most of it is simple to photograph. Stand back. Frame. Focus. Shoot.

But, because the buildings were not designed with photographers in mind, some are difficult to get just right. Cramped streets. Crowds. Odd angles.

And then there is the grand prize of them all. The dome of the Templo del Oratorio de San Felipe Neri. Built in 1712, it is one of my favorite baroque churches in town. Probably, because it retains enough simplicity without giving in to the excesses of the Churrigueresque. The scallop shell facade gives the church an almost fantastical aura. 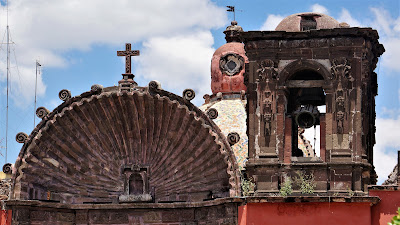 During past visits, I have wandered all around the surrounding blocks to find a good vantage point. And I had yet to find a place where I could see the dome's artistry.

I can see the dome when I walk down the street from Barbara's casita on the hill. But it is too far away and there is too much clutter to really appreciate it. 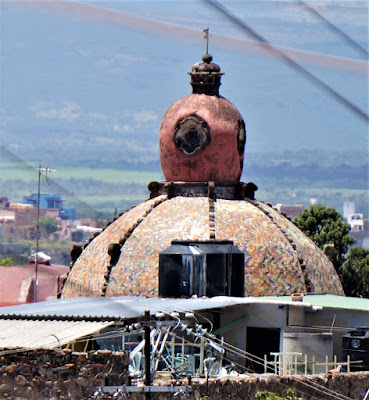 On this visit, I walked around the streets behind the church in vain. And I even walked into private spaces (a hotel) to see if I could catch a glimpse of the dome. I couldn't. (Barbara tells me that the dome is visible from the balcony of the hotel, but I did not feel comfortable climbing around on balconies in a place where I was paying no tariff.)

I had just about given up hope. Until yesterday. For some reason, while walking beside the much larger San Francisco church, I looked up. Usually, the space is filled with tourists trying to board trams, and my attention is directed toward wending my way through the crowd.

Not yesterday. The space was free of people. When I looked up, there it was. The dome I had been searching to photograph for years. Visible from a spot on a street I have walked hundreds of times. 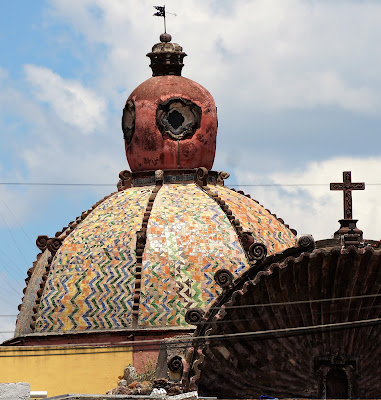 As you can see, it was worth the wait. The colors. The design. Something about the combination makes me want to laugh and sigh.

Why is it so hidden? I suspect it is just bad planning on building placement.

Or maybe, since the church was built to glorify God, the architect had no concern whether we saw it or not. It was built for Him.


And that truly is beyond my pay grade.